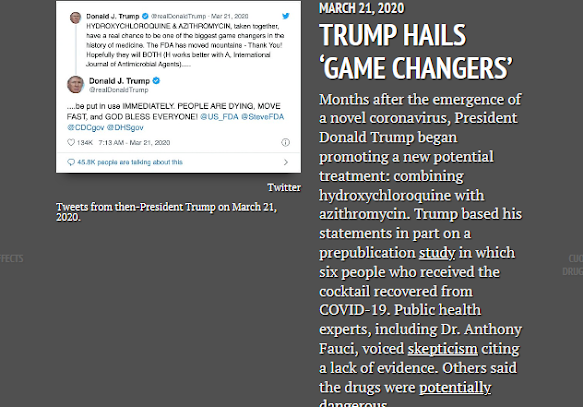 Yvonne Parson wasn’t in the room when her father died. Like millions of people with relatives inside one of the country’s many nursing homes this past year, she couldn’t be.

James Hutcherson, a 93-year-old resident of New York State Veterans’ Home at St. Albans, had been living in the state-run Queens facility for four years, after being diagnosed with Parkinson’s disease and dementia. Parson says she visited him twice a week, paid his medical bills and oversaw his care, communicating regularly with the nursing staff.

By March 2020, however, those communications became more difficult. Gov. Andrew Cuomo ordered all nursing facilities closed to visitors and, soon after, COVID-19 infiltrated St. Albans. On April 8, Parson got the call she never wanted: Her father had died, a doctor explained.

Weeks later, Parson received her father’s final medical bill in the mail. Scanning the list of prescriptions, she paused on two drugs she didn’t recognize: hydroxychloroquine and azithromycin. She had known everything about his medical treatment. Why didn’t she know about this?

Hydroxychloroquine, an antimalarial drug first approved in the United States in 1955, was used widely throughout the country last spring as an experimental treatment for COVID-19. The drug, often combined with the antibiotic azithromycin, had been touted for months by officials at every level of government — most prominently by then-President Donald Trump.

The state, which licenses and inspects all 613 nursing homes in New York, allowed the facilities to administer hydroxychloroquine to patients exposed to the virus, even after public health experts cautioned against its use in non-hospital settings or for elderly and vulnerable patients.

Both drugs carry potential side effects, including anemia, neuromuscular damage, vision impairment and, of greatest concern, fatal heart arrhythmia. While rare in healthy patients, the risks increase with age and comorbidities like kidney or cardiovascular disease, experts say. 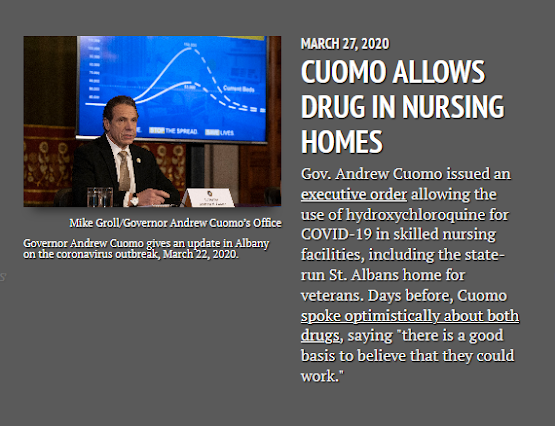 What’s the problem. HCQ works. Sold over the counter in many countries.

Note it's not HCQ alone, it's the cocktail. Which even Trump recognized the risk regarding NH residents with heart problems.

And shouldn't Cuomo giving it the OK be a little problematic considering how he hid the true death totals?

Like a once free world leader once said: "Both sides"

Not sure on this, they tried to save his life and not much was known about this China bat virus at the time
What would one do when death is sure to happen without some kind last ditch effort? HCQ and antibiotics was the only option at the time, and is does work on certain people however this guy was weak and over 90.
Trying to even spoon feed a late stage Alzheimer's patient is near impossible, who knows how much food, pneumonia and infection was already in his lungs before he caught the virus.
Who knows the exact circumstances, perhaps they couldn't reach the relatives.
This person was over 90

The big problem here is the nursing home didn't notify next of kin or health care proxies...

I was going to delete your tired cliched comment.

Did you even read the article? Seriously? And are you still so enamored of the former president that you cant tolerate or even deduce any objective criticism of him, even though I equated his mistakes with the equally lethal decisions made by shitlib adored Cuomo?

Note it's not HCQ alone, it's the cocktail. Which even Trump recognized the risk regarding NH residents with heart problems.

As far as HCQ goes, there is no cocktail, works in the majority of the folks who took it.

That's why the Lancet tried to discredit HCQ then backtrack.

So what are you talking about JQ?

Yes, is not a left or right issue. McKinsey criminals get away with just about anything.

Corporate outsourcing to bankrupt America, Rikers Island debacle loaded with lies, now they have their boy in the current REGIME.

Enjoy your vaccines proles provided by Bill "Visited Epstein Island" Gates who could not write one fucking line of code if his life depended on it.

When do people realize the powers to be want most people bankrupt, better yet, dead.

This is not about the vaccine, but I'm sure we'll see a story soon about that.(sooner than we think considering that the supply dried up). This is about the cocktail and also about avoiding transparency.

Since you missed it, from what I didn't crop and paste

The FDA rescinded its emergency-use authorization of hydroxychloroquine to treat COVID-19. Along with highlighting "cardiac adverse events" that are "serious risks associated with death in some patients," the agency determined that "these medicines showed no benefit for decreasing the likelihood of death or speeding recovery."

Cuomo issued a new executive order effectively ending his March authorization of hydroxychloroquine prescriptions for COVID-19, including in nursing homes. No clear explanation was given, though the order cites "recent findings" and the FDA’s revocation.

I wonder how many died from the cocktail during that month. And that's all I got to say about it.

Thanks for seeing my point, but the pandemic is real and it is being exploited by the rich and powerful and by very weak elected officials.

Why would anyone take a cocktail suggested by trump.

Is this 2-shot vaccine regimen going to protect us from the new mutant plague variety or will another "booster" - a third shot - be on the table? Let's discuss this at the 25% restaurant table.

You ever get the feeling that no one knows what the hell is going on?

Being skeptical of skeptics said...
"Why would anyone take a cocktail suggested by trump"
Explain, What is a Trump cocktail ?
Today's liberals believe in flying unicorns lord help us.

During the Spanish Flu of 1918, there were doctors injecting hydrogen peroxide into people to kill pathogens. They claimed success when 50% of their patients survived. Just a bit of history.

Idk how they got disinfectants ...which could be anything to mean household cleaners. Trump is a bit more suave than that...lol

The reality is if you're under seventy you're not a fat ass and you don't have underlying health conditions you have a 99.8% survivability chance that's about as close to 100% as Tom Brady winning the Super Bowl so why should mommy and daddy government spend all of this money to make big Pharma even wealthier to give us all these stupid little test when it doesn't even make a f***

CDC fumbled key decisions not Trump !
It's now becoming obvious that the CDC completely screwed up the Covid-19 testing from the very beginning of the outbreak and were the reason that we got way behind in testing and tracking Covid at the very start of the pandemic. There was very little Trump or his administration could have done to anticipate it or fix it. Can you imagine the outrage of the media if Trump or someone in his administration would have tried to micromanage the CDC? This Reuters story does a thorough job of exposing the incompetence of the CDC and Covid testing. https://mobile.reuters.com/article/amp/idUSKBN29R1E7

Could Hospitalization is dropping, because they aren't lying anymore ? Well as much anymore...

Meanwhile they're admiten Ilegals without being tested. Why ?

I wonder how many died from the cocktail during that month.

What exactly are you talking about? Name the cocktail, the ingredients.

Please spare us from the FDA and CDC lies.

Now get with the program with something that you know about.

Fake pandemic, fake viruses and fake cocktails are not your forte buddy.

Move on from your deadly "cocktail" theory.

@Anons re: here JQ and the ingredients

"Thursday's retraction doesn't mean that the drug is helpful — or harmful — with respect to the coronavirus."

so the results are inconclusive. And the lancet study was retracted in May, yet Trump's FDA still took it off emergency usage.

Take your complaints to THE CITY and the people who got the bills. I didn't write the article.

And again, the issue here is about transparency and what was given without the deceased and their relatives knowledge.

And again, the issue here is about transparency and what was given without the deceased and their relatives knowledge.

You have no clue what you are talking about.

After about 10 months she got one injection (calcium blocker) that stopped her heart. Without going into details, they DID NOT get her house.

Covid is a cover for the crap that is going on for years.

Do what you are told sheeple or get convicted of wrongthink !