Flushing fire kills 2 at house with history of problems

Two people were killed in an overnight house fire in Queens.

Authorities have confirmed the victims were a father and his young son whose twin brother survived.

As CBS2’s John Dias reports, the Flushing home was destroyed in the fire.

Police confirmed a 6-year-old boy died in the fire, along with a 65-year-old man. Neighbors told Dias it’s a father and his son.

Cellphone video shows flames shooting out of the home at 45-54 157th Street in Flushing, Queens.

It all happened just after 1 a.m

So unbelievably tragic. What could have happened? 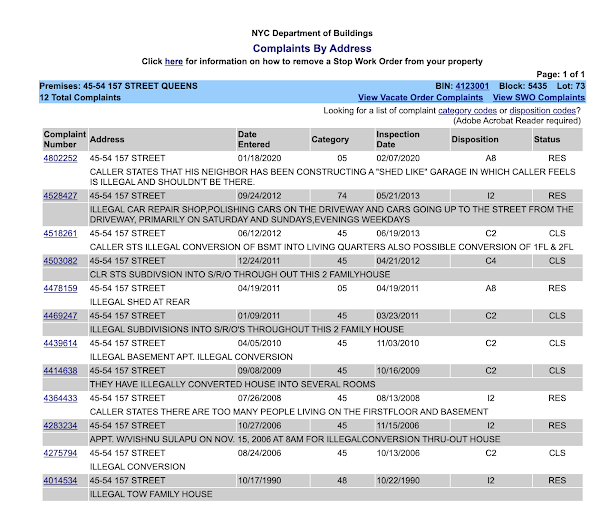 Nothing to see here.

The home was in the middle of various repairs, with blue tarps covering part of the building. It’s not clear if the renovations played a role in the blaze, but last February a contractor linked to the home settled a case with the city, apparently paying a fine after being cited for an unstable shed constructed in the driveway.

Department of Buildings records said the shed and backyard were filled with household debris and tools scattered about.

Posted by Queens Crapper at 9:59 AM

CCP safe house in Falasheng. Gambling, drugs and prostitution.
The 109 knows about these funny houses.

He was the father or grandfather? 65 years old?

For the earliest complaints if you click the individual complaint details to read, the comments show compliance or no evidence of conversion. For the mid-to-later ones, no access was granted to inspectors...afa it being a CCP safehouse, seems like the owner isn't Chinese, from the name. Does anyone here in the peanut gallery actually read these things through...?

"...seems like the owner isn't Chinese, from the name. Does anyone here in the peanut gallery actually read these things through...?"
The owner is not the deceased. According to reports he was a tenant.

The owner is not the deceased. According to reports he was a tenant.

Important that JQ and Tommy read the report. Without understanding a fucking thing.
But hey they read it. Comprehension anyone?

Fuckos I know the house! I know what is going on there.
But hey you read just fine.