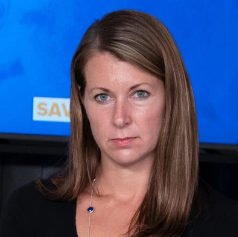 Governor Cuomo’s top aide privately apologized to Democratic lawmakers for withholding the state’s nursing-home death toll from COVID-19 — telling them “we froze” out of fear the true numbers would “be used against us” by federal prosecutors, The Post has learned.

The stunning admission of a cover-up was made by Secretary to the Governor Melissa DeRosa during a video conference call with state Democratic leaders in which she said the Cuomo administration had rebuffed a legislative request for the tally in August because “right around the same time, [then-President Donald Trump] turns this into a giant political football,” according to an audio recording of the two-hour-plus meeting.

In addition to attacking Cuomo’s fellow Democratic governors, DeRosa said, Trump “directs the Department of Justice to do an investigation into us.”

“And basically, we froze,” she told the lawmakers on the call.

DeRosa added: “That played a very large role into this.”

After dropping the bombshell, DeRosa asked for “a little bit of appreciation of the context” and offered what appears to be the Cuomo administration’s first apology for its handling of nursing homes amid the pandemic.

But instead of a mea culpa to the grieving family members of more than 13,000 dead seniors or the critics who say the Health Department spread COVID-19 in the care facilities with a March 25 state Health Department directive that nursing homes admit infected patients, DeRosa tried to make amends with the fellow Democrats for the political inconvenience it caused them.

“So we do apologize,” she said. “I do understand the position that you were put in. I know that it is not fair. It was not our intention to put you in that political position with the Republicans.”

I'm sure CNN and the rest of the mainstream media will dutifully report this...fucking cuomigula. What a strunz' He'll get a 4th term though

Look at the bright side, even here we are entertained with the HCQ cocktail BS!

Will there be a revised version of his book or will this be in part 2?

DJT right again. The press is the enemy of the people.

Remember all the knob slobbering of Cuomo?? Fake comedian Colbert revered to him “as your Excellency “. Pa-thetic.

Even gave him an Emmy. Ha.

So many QC posters even had hard-ons for this guy.
Recall his ass.

What a shock... Cuomo and the media lied.

The Gatekeepers are finally showing the public why they should be removed.

Nothing more extreme then people that believe State propoganda !

Sheeple Nobody is going to hold Cuomo accountable.
The contrast on how they treat him and Trump is crazy.

Forget Benito, he is a small potato.

Conspiracy galore. Did anyone ever see Bill Gates and his franken bride with a mask?

How about the Clintons?

Few garbage elitist can lock down the world? And there is no conspiracy? hahahahaha

Obviously, any corruption in the Cumo faction is because orange man bad.

Watch them say that they have to be corrupt to "fix" Trumps "damage" !

Did you expect Any thing else from a, passive aggressive, manipulative, narcissistic, physopath, look at the guy, he's nuttier than a fruitcake and batshit crazy. He has dead eyes. It is sickening to try an watch and listen to him . I have never seen someone who is so full of himself.

So is chicken fredo still defending his older goomba ?

Do you think Cuomo is bangin' her? I hope so, cause if this woman is single, she's not getting any better looking with age.

Three Men in a room ? One man in a cell is more like it !

Who gives a rats ass. At least he had time to write a book and pat him self on the back for the great job he was doing.
Where was the media in this debacle? There is not one reporter or media outlet that had the balls to question this moron. Oh I forgot he's a DEMOCRAT he and could do no wrong.
IT'S ALL TRUMP'S FAULT.

The Dems have all the News Outlets backing them, they can do this to old people and Nothing will ever Happen.
In the mean time Trump says Boo and he is Impeached a 2nd time!

We need a nurse TikTok dance for this....

Now the Emmy is more justified. He was not only on TV, he was literally acting.

And Cuomo thought he was running for president...lol

If you ask me the media is just as guilty !

Could Comrade Como be the first Domino to start the fall of the swamp and socialist democratic party ?

Good,couldn't have happened to a more arrogant person. His self righteous daily briefings made me sick. Him and his arrogant brother took every chance to be good lap dogs and bash Trump. Hope they get what they deserve for all their fake news.

In the mean time Trump says Boo and he is Impeached a 2nd time!

Actually he was acquitted for the 2nd time. Teflon Don vs the dumb comucrats.

I'll do her anytime. Especially now that Benito is also known as a mass murderer.
Well done Benito! Bro can't keep up with the coverup at CNN. Even his fellow commies are disgusted with you and your bro.

Got to give credit to Benito.
The Emmy Award-winning retardo managed to accomplish something
that very few modern era politicians have achieved - he united Republicans and Democrats and now they want his head.

@Julie She's OK but Lizzy is still my girl !

Everybody knows that the ship is sinking.

"We like Fang Fang too!"
Eric Fartwell had an affair with a Chinese spy. They use to call that treason

She is married. So you don't have to worry about her love life.

However her mother-in-law is SDNY chief Audrey Strauss!

So she threw Benito under the bus OK. Hubby used to be a Benito spokesman!