Rockaway streets flood after 20 inches of snow; city waits too long to dig out South Queens 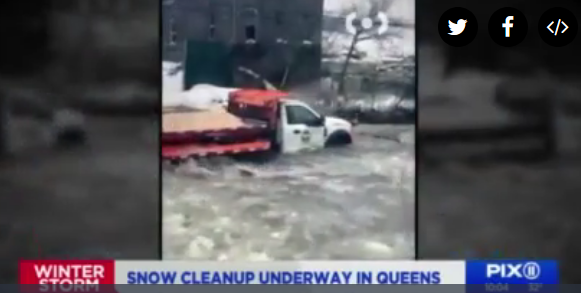 After a storm of the magnitude the New York area faced Monday and Tuesday, digging out will take not only some strength and heavy equipment, but some skill as well.

Many homeowners in Queens were at it all day, but some were frustrated to see people shoveling and putting the snow right back into the street.

"If you want a piece of advice: don't throw it back on the street, put it on the side," he said.

A 20-year veteran of the department, Covington knows a thing or two about clearing snow, even when it’s more than a foot.

“Just throw it on a mound, like a pile or a mound of snow," Covington said.

Covington's seen it all but there's still something different about this storm.

“This is like a nuisance type of storm because it snowed and then it stopped for a minute and then it wants to rain," Covington said.

Driving through Queens, for the most part PIX11 found blacktop, but Sanitation Commissioner Edward Grayson admitted plow trucks were still trying to make it to all residential streets

“Were out there through the night, out all day today," he said. "We will readdress those residential streets. You will see blacktop today.”

When it floods in Rockaway Beach, it really floods.

Resident Mona Hubbard said, “It's like a river down there, you need a rowboat to get out of here.”

Hubbard recorded video Tuesday from her apartment as she watched her neighbor fight through coastal flood waters.

“It’s snows then the high tide comes up so it overflows and it’s like the Antarctica her out here," she said.

It's an on going problem for people who live on her block. Citizen App video showed a city sanitation truck being swept away —the water right up to the door.

Long time resident Wanda McDowell said she feels like a prisoner in her own home whenever there is high tide or a storm.

Wait until next Monday when temperatures will be in the teens.

I ask people all the time not to throw the snow back into the street !
They look at me with a stupid look and ask why is it a problem ?

Throwing snow into the street is a problem? Isn't that where it's supposed to go?

So think brainless idiots who themselves should be buried in it.
This is what happens when common sense becomes extinct.

What is the problem? It melts faster on exposed blacktop with the cars driving over it. And when everyone's car is boxed in where are they supposed to put the snow?

Throwing snow in the street turns the road into a moonscape when it's still cold and there's no sun out to melt it.

We are talking about shovel loads not a dump truck load in the street. Ever notice how fast snow melts when you expose some concrete or road? The street can handle it. Plus snow piles can take weeks to melt and take up parking spots.

JQ see that's like the replies I get from people who know it all.
C’mon man DON'T THROW SNOW INTO THE STREET it's not safe.

C’mon man DON'T THROW SNOW INTO THE STREET it's not safe.

Correct! Is also illegal after the Sanitation Dept. plowed the street.

Snow that's spread out melts faster. Don't do it when the weather will be overcast and colder, but today (blue and sunny) was PERFECT for melting the 65% of the snow I threw out onto the street. And YES, the DOS' trucks smushed it all into the liquid equivalent of fine grist, as expected. The remainder that didn't get chucked streetwards ends up in small hillocks built up around poles, trees, and corners. COMMON SENSE.