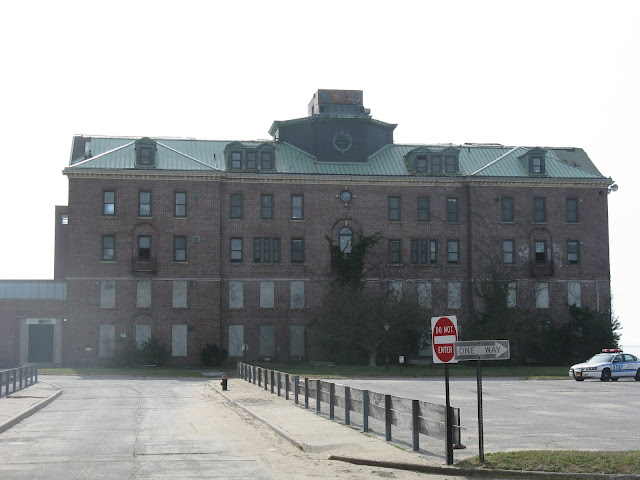 Hi Crappie, I was wondering if anyone knows what's going on with the Nursing Home that's on the beach in Neponsit. I remember that Mayor Giuliani ordered an evacuation in the middle of the night in the winter because of structural problems with the building.There was an outcry that some people died from the move and there was talk that the mayor was doing his developer friends a favor by condemning the property. Recently I was at Riis Park and noticed a police car sitting by the building all day. What's up?

The Nursing Home on the boardwalk at 116 street has a dead tree hanging over it's main entrance.The tree was half dead before Hurricane Katrina pushed the boardwalk against the building. You think someone would have removed the dead tree before it clobbers someone and they will sue the city for millions. 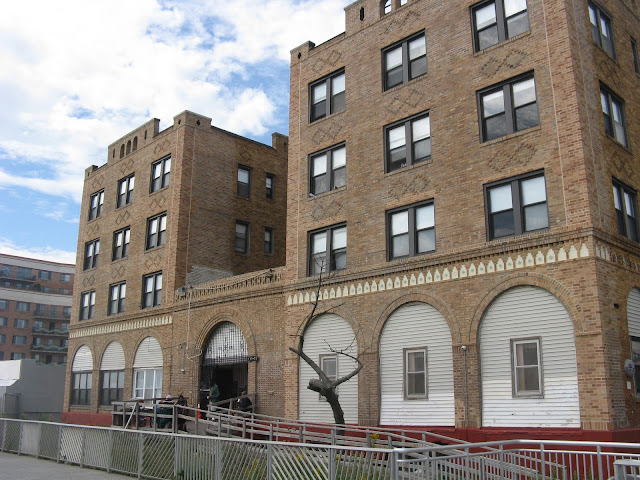 Cops are probably to ward off infiltrators like the homeless and junkies. But it is weird that there has not been any new development to coincide with the pretty new boardwalk and bar/restaurant scene. The odds are pretty good that it's going to be one of the 90 homeless shelters, for it will be filled once the hyper-development and market speculation gentrifies the beach for good and causes inevitable displacement.

And that's not the only one that has seen no activity in 20 plus years, the big one at the end of Belle Harbor at Riis Park has a police car guarding all day and an unmarked one at night. Although it has trailers in there and somehow there is new grass and benches.

The tower is lit at night and the windows are cemented up, giving it a very ominous feel What's going on at Rockaway is very, very peculiar. And suspicious.

I love it when mindless people accuse others (Mayor Rudy in this case)that every action has an ulterior motive. I remember the outrage when it was cleared out.

This would be a great housing facility for poor veterans of foreign wars or a transition home for vets coming home.

This is a story about 2 different creepy nursing homes. The one with the tree is near 116th as you can see with the condos a block away. The big one I mentioned is the second picture and was instrumental in staving off and curing tuberculosis affecting children in the early 20th century.

One day I saw lifeguards coming and going from there, so those trailers might have been their stations, because they used to come from the big abandoned bathhouse that Gateway and the city hoped to get bought or rented via privitization. Alas, it did not happen.

Also Neponsit WAS cleaner out for nefarious reasons. The building was not structurally damaged like they claimed - and is still standing today despite 2 decades of neglect. I've been inside - there was no reason to kick all those people out in the middle of the night.

Security at all of these places is a joke. One of the guards was arrested years ago for raping a 14 year old in the guard booth.

SO, there's your homeless shelter

Seems like a better place to put a homeless shelter than at a hotel.

The place with the dead tree is the Park Inn, a former hotel and night spot. It was famous for local weddings and other parties at one time. Now, in our glorious years of diversity and multiculturalism, it is a notorious assisted living center where the residents are allowed to act out on each other and wander the streets of Rockaway begging for food and money. Walk down Beach 116th Street and you will soon meet and be accosted by them. There have been many altercations and brawls between patients, one such assault with a walker ended in a fatality. It is a dangerous and unsanitary place, a vision of hell itself. The property owners are warehousing the mentally ill and other disabled, exploiting them the Social Security, Medicare, Medicaid, public health money and block food stamps. The owners and operators of the assisted living center are robbing the tax payer daily.
Some one really should close this place down. It is a tragedy. It stinks - literally. The occupants sit on the stoop or on the boardwalk and some are incontinent. No one is taking care of them, they are truly the forsaken.

The other place is the Neponsit Nursing Home. thanks for the link on it. So much information on it.

It can't be a homeless shelter because there are none of the required establishments with in walking distance - no McDonalds, no Arab owned 24 hour convenience store, no dive bars or ghetto Chinese food place for the necessary grease of fried chicken wings and french fries. There are no crack dealers with in walking distance. The bus only stops by it in the summer time and it is quite desolate. Also the residents of the homeless shelter might wander off into the rough Atlantic Ocean and drown. Or fall into Jamaica Bay, so no homeless shelter

You're welcome on the link, and your eyewitness report on Park Inn.

It won't be a homeless shelter because surely the citizens of neighboring Belle Harbor would be livid if they see the mentally ill homeless and the recidivist criminals wandering the streets their gorgeous homes.

The cool thing about Riis is that it so far away, which is why a shelter wouldn't work there, that it's too far for derelicts to traverse. Although there is a place to buy booze there, the beach bazaar is still operating, but being a hipshit craft beer attraction, their prices are naturally marked up.

116th st. is a dead zone and an isolated safe zone because of the police station at the train station down the block and the century old bar across the street. Walk a few blocks down though is risky. A rape happened by a development site there a year ago I think. It's really preposterous that a main thoroughfare like that is not a happening destination scene. I guess the lunatic future development happening there is suppose to fix that.

The neponsit center has an eerie Area 51 vibe at night. Like I wrote, The tower for some reason is lit. It's like something that The Intercept would do a feature on.