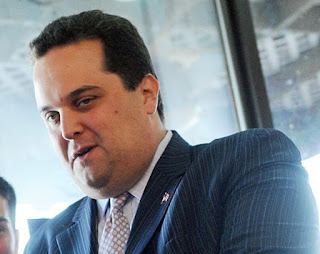 Former City Councilman Anthony Como, who served a whopping 5 months in office back in 2008, has resurfaced. He is trying to inject himself into the District 30 City Council race. Why? It appears to be sour grapes.

He started back in September, whining to the Queens Tribune:


“I was extremely upset and disenchanted when [Robert Holden] got the Conservative [Party] endorsement. When something like that happens, you know there is something behind the scenes going on,” Como said.

Oh no, Anthony is disenchanted! Well, Holden collected signatures to get on that line after the party agreed to back him - just like as Anthony did when he ran for City Council on the Conservative line. Como is not a registered Conservative but a Republican. Then he stepped it up by authoring this letter with this included:


On this November’s ballot, the Republican candidate will be an erstwhile longstanding Democrat who is little more than a pawn for party bosses.

I think Liz Crowley and every other candidate with Machine backing are the bigger pawns for party bosses, dontcha think? Hilarious. He is so upset that a registered Republican didn't get the party's nod that he endorsed Liz Crowley - who claims her opponent is really a Republican - because that makes perfect sense. Como lives in Merrick, LI now, by the way (Amy Fisher country).

Finally, he's giving quotes like this to the Queens Chronicle:


“It’s embarrassing. I don’t know what it is going to take for our party leaders to stop perpetrating these scams on the voters.”

So let's recall how Mr. Como tried to scam voters when he put out a palm card claiming that the Catholic Church endorsed him.

Let's also remember that Mr. Como had committed to run for City Council to try to reclaim his seat back in 2009, but was more than happy to step aside for a backroom deal patronage job.


A former Queens Republican councilman is in line to be appointed by Mayor Bloomberg as a $172,311 commissioner at the Housing Authority — considered a prime patronage post — just weeks after the county’s GOP endorsed the mayor’s re-election bid, The Post has learned.

His departure from the race cleared the way for Tom Ognibene to not have to run in a primary that year, yet the joke was on Como, because he never got the job.

Reviewing this guy's history was like a walk down nightmare lane without even getting into the infamous violations on his house.
Posted by Queens Crapper at 6:55 AM

Wow someone is really trying to stay relevant. Let's hope he stays out on LI and doesn't try to run here, although residency doesn't seem to be an issue in this borough....

Here's the funny thing...Liz Crowley recently sent out a hit piece claiming that by taking the GOP line, Holden was siding with the pro-NRA crowd, pro-Trump, anti abortion, etc. But she proudly accepts the endorsement of a "real" Republican? Um, hypocrite much?

The only bigger hypocrites are the Maspeth residents who claim they are voting for Malliotakis because they hate De Blasio, yet also are supporting Crowley because she is a "real Democrat" and Holden isn't (even though he stopped the shelter they were protesting while she was making deal with Steve Banks to place it there).

Bipartisanship can be convenient at times...

I have a gut feeling that Lizzie is going to reap what she has sown in her political career if she wins. Manes and those corrupt hacks in the 80's eventually got theirs.

Those people tend to be illiterate and are the epitome of stupid, and that's how we end up with such shitty representation and services. Crowley is pro jails and shelters in our backyards and these dopes are following her around like puppy dogs, not realizing that they are being used. Once the election is over, they won't see hide nor hair of her even if she wins. She lives in freaking Breezy Point with the fiance! Her Glendale neighbors haven't seen her in months.

I don't understand why the people of Queens place party over person. Who cares whether the person is Republican, Democratic, Conservative, Independent, etc. People need to research the candidates and see which ones align with their views. Research what these people have done to make your community better. I think people in Queens think that if you are Democratic, you must vote for the Democratic Candidate - same for Republicans. You can vote for anyone you want to. I think this is a major misconception on the part of the constituents. All I hear is people complaining about Liz Crowley, yet they will all vote her in for another term. If you don't like something, try to change it. We have the power to change things by our vote. Unfortunately, people keep voting the same crap in, over and over again. You get the government you deserve.

Yes - see the list of candidates in the Gotham Gazette.

Wait what happens when she gets in. The money will be flowing under the table. Say goodbye to maspeth and middle village. You’ll se 3 ,maybe four homeless shelters. She will have nothing to lose but the residents will......suckers.

Queens Politicians- a clique of thugs.

Anthony Como is a bloated bafoon who was not fit for office. He's been a political hack for decades. The last guy to talk about back room deals is this fool.

Useless is better than Dizzy Lizzy following orders and screwing everybody
almost sorry, I mean that figuratively, not literally
Those skirts are a bit too tight for my taste

Alas, it is unqualified hacks like this shnook who give mendacity a bad name. But, let's face the 'Cold Light of Day' facts, Queens Crappers. Politics have ruined New York City and New York State government——to ruinous and obliterating effect!

There IS no honest, ethical, inclusionary, NOT FOR SALE leadership that leads by example (if ever!), and this fat, useless, petrified turd is the solid waste and proof that it's time to make all political corruption a capital offense.

I am sick to death of these regurgitated, cradle-to-grave government wanna be's, all of whom devalue honesty itself, for which We, the People end up paying a grave and sobering price, as THEY GET their defined pensions that were designated for everyone else that WE PAID FOR.

Now, if THAT doesn't cause World War III——then, I don't know WHAT EVER IT WILL TAKE, 'SHEEPLE!' WAKE THE F**K UP, ALREADY!