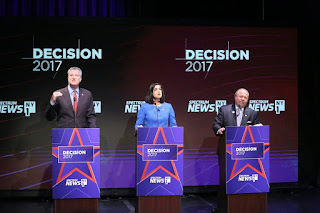 There was Mayor Bill de Blasio, up 40-plus points in the polls and towering in every sense over Republican Nicole Malliotakis, who went on, and on, and on about how New York (where crime is in fact at a record low) is collapsing into its blood-soaked streets.

She in turn towered over general creep Bo Dietl, who spent the night interrupting her and hurling non-sequiturs — "MOOSE! JAIL REFORM! TOUGH COP! BO DIETL!" — and random insults at the mayor.

All this as the crowd brought in by the campaigns yelled, hissed and chanted, giving our system in which few people vote and few votes matter that bread-and-circuses feel.

De Blasio's first words set the tone: "You know sometimes there are elections--" "BOOOOOOO!!!!!!"
Posted by Queens Crapper at 6:30 AM

Queens needs to drain the swamp. Big Bird Ass Hat needs to go. It's just a shame that the other 2 are also bozoes.

From a statistical point of view, our comrade was elected with the lowest percentage of turn out in recent history.

His supporters are neither motivated nor enthused.

Polling was quite off in many areas, can you say President Donald John Trump?

It is quite imperative to rally one's family friends and neighbors to oust this self proclaimed communist before every landmark, statue, and piece of our history is swept into the dustbin for eternity.

If reelected, the new Czar will have no restraints whatsoever, as term limits should make this his last time in office.

Although the City Council, much like the Roman Senate, may declare another exemption for the people's declaration of limiting the amount of time these fools continue their oppression upon us.

Oklahoma is looking better each and every day...

All of the questioners were leftists.

Hell, I'm surprised they didn't ask for a moment of silence for the 50th anniversary of Che Guevara's perforation. The boy mayor would have taken a knee for that.

Have to admit DeBozo was the professional looking and acting one on stage last night. Bo needs to shave, looks like an old Bowery bum.

What a contrast from the primary debate with Albanese and this summerslam undercard match from last night. Funny how Errol Lewis, who is officially a disgrace and lost credibility, was willing to kick out people for yelling in the primary debate, but didn't mind when all those de Faustio groupies were screaming and yelling for their incompetent and corrupt mayor.

Everyone, except for Nicole at times, was obnoxious, dishonest and repulsive, and that includes the minions for Spectrum and that token reporter from Politico, apparently their employer wants de Faustio to get re-elected which is why every question, even the ones that seemed critical, was perfectly aligned with his agenda.

Bo is definitely not qualified and buffoonish, but he did not deserve to get his mic cut off when de Faustio continued to lie and chastised him and Nicole for voting for Trump, which is the only thing he's running on and to justify his re-election.

Too bad they "ran out of time" (these debates should be longer and be rid of these time constraints), because I would have asked the mayor in response of my Trump vote about the citizens in new york who voted for Trump, do they deserve to be denied civic services because of their decision too? And also why did he support a selfish narcissistic slag dependent on mega-donors that had no chance of winning? And why didn't he support Bernie Sanders like he initially (allegedly) wanted to, who is now officially the most popular elected official in the country?

Maybe next time they will on CBS. Can't wait for Marcia Kramer to ram de Faustio again, and for Nicole to continue to get under his skin with the facts he refuses to hear, he better wear 2 pairs of Depends for that one.

It's too bad the organizers didn't allow Sal Albanese to participate - he's actually intelligent, whether one agrees with his policy suggestions or not.

Sal Albanese should have been in this debate. The fix is in.

Where can I watch a recording of this?

Look folks....wake up. Shit is running against name brand shit (De Blasio). So get used to Bill Duh's re-election. Anyway it's REBNY who really runs NYC. The mayors are just figureheads for the real estate boys.

"Where can I watch a recording of this?"

And the fix WAS in. And Bo was permitted to the debate to throw off Nicole's campaign and make a bunch of noise to make de Faustio look sympathetic.

But check out when Nicole shuts the Blaz up when she brings up Mario's son about the worst fucking transit system in the universe (this clip has seen a lot of news time) and when she also brings up Rivington House and the Holmes projects involving a predatory developer donor of his.

Blaz's campaign platform is basically that he didn't vote for Trump.

Correction on my last tirade/comment; I didn't vote for trump, I just used it as a hypothesis.

I might as well put my endorsement out now. Malliotakis for mayor. This is from a registered dem with socialist/liberal/libertarian leanings.

He has a secret plan to deal with the homeless problem, but he can't tell us what it is until after the election. Just like Nixon's secret plan to end the Vietnam War.

I can !
He's going to put them in peoples homes in exchange for guaranteed rent $$ tax breaks and stamped CA's wile he frees up Rikers Island to invite more to this city. He gets to destroy and bust neighborhoods like Maspeth, Ridgewood, MV and Glendale in the process.
Its a win-win and one not need to be Einstein to figure that one out.
The asshole has copying from Amsterdam and city's in Northern Europe for quite some time.

Due to the sheer numbers and logistics no other possibility exists.