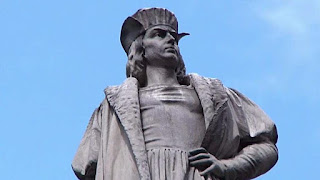 ...the statue of Christopher Columbus in Columbus Circle was not built to herald the explorer’s subjugation of native people. If it had been, I would be the first to demand that it be torn down.

No, the Columbus Circle statue was erected in 1892 following a massive fundraising campaign by the nation’s Italian-American community in recognition of the 400th anniversary of Columbus’ landing in the Americas.

Hard-working men, women and families of Italian descent, along with businesses and various institutions with Italian or Italian-American ties, pooled their money to pay for the statue as a way to give something of value back to the city that had given so much to them. They were acting in the spirit of community and with a love of this nation and the dream it represents.

Across the city, there are statues and monuments to great men and great women who have made a significant impact on our world. Yet they cannot be judged fairly using only the standards of our time.

A group of Italian American and Catholic organizations rolled out a list of 54 elected officials and candidates for office in New York City who want to keep the Christopher Columbus statues in the city.

The problem with letting the patient's run the asylum is that eventually they turn on you.

As you can see with the next story about affordable housing advocates complaining the mayor hasn't done enough. Mob rule degenerates pretty quickly.

Being a first rate Democrat is still helping Harvey Weinstein but for how long?

There should be a hundred-fold increase in the number of Columbus statues. I even want one on my block! Not only does Columbus have significance for the Italian-American community but also for budding businessmen and women. Columbus is THE epitome of entrepreneurial endeavor.

I would rather have been a slave to Columbus than a human sacrificial victim to Quetzalcoatl. Ask Columbus' slaves which fate they would prefer.

While we are at it, let's erect a statue to the red Melissa Mark-Viverito with her head-down in a garbage pail.

The Astoria parade this past Saturday honoring the Great Navigator went on without a hitch. Not one revisionist protestor raised a voice. And the statue looks even more beautiful than ever.

Let us see their positions and opinions on this and so many other issues.

THE DAY AFTER THE ELECTION!!!

let's erect a statue to the red Melissa Mark-Viverito with her head-down in a garbage pail.

Come on George, everybody knows that Mark-Viverito only bends over for Oscar Lopez Rivera.

I see the rabid racist moron Charles Barron is scrambling to introduce a law eliminating Columbus Day, citing his "slaughter of indigenous people and taking over their land". Yo, cupcake - what do you think YOUR tribal ancestors did in Africa? Tribes have been slaughtering rivals and taking over their land since there were human beings. And Columbus did not conduct a wholesale slaughter of indigenous people. Barron is just parroting a bunch of trash talk he picked up which is infused with a couple molecules of fact. That's about all he's capable of.

Alas, not so long ago, I vividly remember how former, disgraced Congressman Anthony Weiner took time out of his busy, stressful days of 'lunch-and-a-manicure' (between long jags of, ahem, meditation in his private, BrainWashington, D.C. 'Masturbatorium'), came out to Kew Gardens Plaza on Friday, February 25, 2011, and proposed that ANOTHER prominent statue, 'Triumph Of Civic Virtue,' be sold on Craig's List.

But, Civic Virtue's tragic and outrageous eviction, for all of Queens Borough Hall's ALL FEMALE, concentrated minority of disdain and contempt for the statue's great triumph over the two female sea sirens that were draped at his feet, which were allegories for corruption and vice, came with a price for Weiner——less than 10 weeks later, the 'sexting' representative of epic fail resigned in disgrace——a direct and visible testament to how Civic Virtue actually works, when We, the People are not silenced by neo-fascism, neo-feudalism, neo-Bolshevism and neo-liberalism.

Hence, I am still fighting for Civic Virtue's return to his home at Kew Gardens Plaza, on Queens Boulevard (as our poor warrior of eternal virtue and altruism continues to languish at Green-Wood Cemetery in Brooklyn, ironically among the dead and buried).

But, given the total lack of public trust, ethics, integrity, accountability and transparency within the hyper-corrupt, entrenched, DemonRatic, establishment-rigged halls of Queens Borough Hall itself (a bastion of hypocrisy and openly practiced corruption, graft, greed, cronyism, nepotism and anarchy), the statue's return would represent the ONLY honest figure in our power-seized government bought henchmen, among a cabal of concentrated politial wealth (that determines WORTH), all of which now COMPLETELY DEVALUES all honesty itself——to pathologically high treasonous, traitorous and tyrannical effect——and, the public be damned (again and STILL)!

Leave the statues alone, you filthy, 'ALL PAY and NO WORK' politicians, and finally get to work (ANY WORK)! Because, statues don't inflict harm; quite the contrary, they are works of great art, history and chronology——so unlike the 'do nothing, vastly overpaid no nothing' politicians (not public servants), all of whom are looking for easy projects that no one ever asked them to take issue with in the first place.

Italian American and especially Catholic organizations don't count, the mayor and the other communists he appointed to decide are gonna take it down anyway.

These Italians need to get the Catholic organizations out of the picture, because all the hatred toward Catholic church will guarantee it demise !

Remember the good old days when the Democrat party was the party of Rum, Romanism, and Rebellion?

Now it's greed, envy and spite.

Leave the statues alone, you filthy, 'ALL PAY and NO WORK' politicians.

True but the these politicians only want tributes and legacy's to themselves.
If Da Blasshole wins another term the statues are guaranteed to be torn down via proxy of this bogus specially selected committee of hand picked liberals, socialists & communist's.

Oh and one more reason to celebrate today. It is Che Guevara's death day!!! Anyone notice if Deblaz was wearing a black arm band.

Arm band likely a vascular compression from all the drugs.
This mayor is really off his rocker with serious mental issues, he would have to be on something to get through the day.

Oh boy, some people really cling to their myths and fables.

If you want a good discussion about how Columbus became such a figure in American history, listen to this podcast segment from Monday's Brian Leher show on WNYC:

It is balanced and informative.

And when you're finished reading the Lehrer palaver, read THIS metaphysical meaning of Columbus. Then view THIS scenario of pre-Columbian indigenous "culture".

Does the 2nd grade purposefully Columbus-ignoring and Iroquois-loving teacher who called into the Lehrer show, teach her students about this "indigenous" Aztec human sacrifice?

Columbus is part of the history good or bad.
But, people should learn their history and stop spreading the myth.

Just add a plaque below the statue that explains the controversy and leave the statue.
..among some topics....


1) He had the hands cut off natives if they didn't collect enough gold to bring back.
2) His men killed natives for fun
3) They took thousands of natives as slaves back to Spain
4) Columbus and his men raped natives at their pleasure.

A few years ago there was a teacher who thought his students were over relying on the internet. He gave them a report on Columbus. He advised them not to use sources like the internet. Prior to that he had edited the Columbus Wikipedia article to include a mention of his brother and some problem they had between them that led to him going to sea. It was totally made up.

Over half of his students wrote about his brother as the reason he was a sailor.

He called them out on their lack of an academic approach to their school work.

Hopefully a few took the hint.

Sadly I think most didn't even see the point.

I did think it was clever though.

This entire country, not just NYC, has gone completely bonkers over statuary. Whatever is in the water that these people are drinking has made them angry, mentally ill misfits of society who are being preyed upon and used as pawns to disrupt society. They are small in number (and small in thought) relative to the entire population, but the puppet master that is driving them to protest is deeply imbedded in politics with no good intentions.

Here, Mr. "Galt" -read the facts about what is probably one of your heroes:

As for Columbus, his adherents seem to fall into two categories:

1) Those who are loath to admit they were given false information (propaganda) by their teachers and parents.

2) Childish resentment of "Liberals" -those whom make up the mass of current criticism regarding Columbus. In nice simple terms: anything a liberal hates -they like.

In the longterm, the Columbus problem will be dealt with -first with informative "plaques" at each statue and greater public information about this figure which will lead to a wider debate of 'why keep these at-all?" Followed by a quiet removal.

If Columbus were alive today, he'd be imprisoned for crimes against humanity -or killed.

What did he think they would rely on personal interviews?

I did all my masters research online. Where else would I do it? A library? LOL Everything at the library is online. Micro phish or whatever that crap was.

>> My favorite Columbus story:
>> A few years ago there was a teacher who thought his students were over relying on the ??
>> internet.

"Here, Mr. "Galt" -read the facts about what is probably one of your heroes:"

Marx/Lenin/Stalin vs. Rand. Don't straddle the fence with any agnosticism. Choose. Who do YOU see in the mirror? Mankind or yourself? Plato or Aristotle?

Hmmm....what about our Southern brothers who subjugated...who was it now? America was built upon "freedom" and hypocrisy!

"...what about our Southern brothers who subjugated..."

Included, of course, in those "Southern Brothers" you refer to were African-American slaveholders ("There were instances...in which free Negroes had a real economic interest in the institution of slavery and held slaves in order to improve their economic status." - the African-American historian John Hope Franklin) AND slave-holding Berengian tribes such as the Choctaw and Chickasaw who fought alongside the Confederacy.