Vallone mailer is a laugh riot 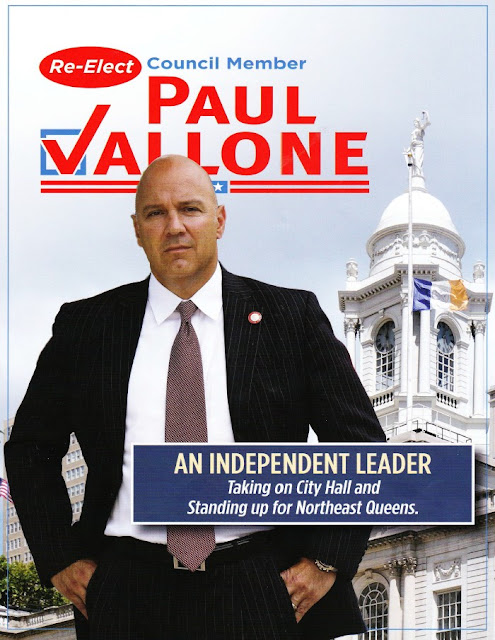 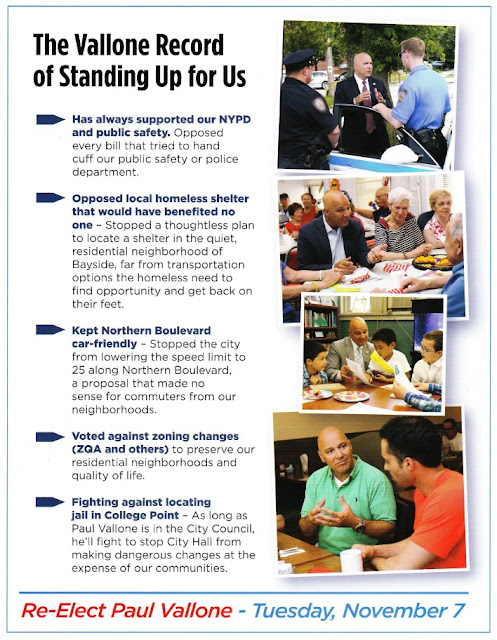 "Opposed every bill that tried to hand cuff our public safety or police department."
I'm not sure how you hand cuff public safety and I'm pretty sure it's one word - handcuff. Also, the bills were overwhelmingly passed anyway after you asked the Speaker to vote no to cover your ass politically, so this isn't really something to brag about.

Next, Vallone completely made up that there was a threat of a homeless shelter coming to Bayside so he could then take credit for stopping it. DHS said many times that they weren't even looking at Bayside.

You kept Northern Blvd "car friendly", which is why there have been at least 4 accidents there in the last month after you failed to stop the city from installing a barrier and bike lane there.

Voted against ZQA! Yet simultaneously voted in favor of MIH...which is actually worse.

Fighting against a jail in College Point, but happily endorsed the guy who wants to put one there - Mayor de Blasio. 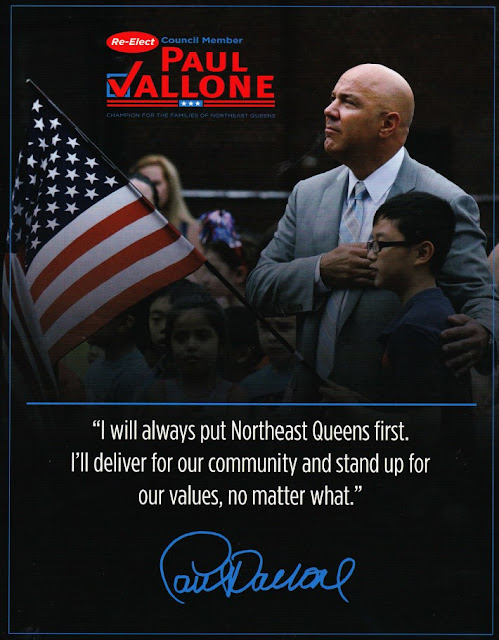 Great dictator pose.
Posted by Queens Crapper at 7:16 AM

His own front yard is loaded with Vote for Vallone signs. Really pathetic.

YOU CANNOT BE AN INDEPENDENT LEADER when you belong to a party that does not have INDEPENDENT IN IT.

Christ the ad looks like a poster for some Goomba Dirty Harry flick.

He can't event stop the loud music miles away from vibrating my home in Whitestone.

I don’t know one person from his own parish of Saint Andrews who is voting for him. Even the ones with the lawn signs. Any time you bring the guy up, you’re met with eye rolls. People know who he really works for and are tired of all the soccer dad crap. The movies and fireworks are a joke. Neighborhood is going to shit and all the guy thinks about is entertainment. Here’s to hoping the Other Paul has this one.

Even seasoned families of organized crime rings stare in disbelief over how this political scourge or epic fail has been able to OPENLY PRACTICE his filthy, self-serving, corruption, graft and endless greed that comes from the breeding point of dynastic, taxpayer funded wealth (that determines WORTH)!

It's like having a top level capo/uncle in the Mafia, which is what the entire city council is (and, always HAS been)! Get rid of this rabid squirrel and his dray of nutless family shitheads, all of whom have so completely duped, bilked, robbed, scammed and damned their purported constituents, that they now devalue all honesty itself. They all deserve a permanent cell in solitary for life!

Actually, the "tough guy" pose in front of City Hall was a leftover photo he used for the remake of "Three Amigos". Unfortunately, Stinky's only two friends are his brothers, so Harvey Weinstein dropped the project.

Stinky is a creep and NE Queens is a mess. Over that last four years crime has gone up, taxes have gone up, houses with 50 people living in them has gone up and every day I hear of another home break in. GET RID OF THIS GUY or shall i say "part time councilman" because the whole time he has been doing photo ops he has also been working as a lawyer. We deserve a full time councilman.

When will the people of queens get sick of Valloney Balloney. He placed 38 out of 50. You know why? Cuz he stinks! We deserve so much better. Vote for Graziano a life long resident, knows NE queens like no other and he has been doing the already for 20 years as a volunteer.

HA! is that what he told the owners of reception house when he took $2,500 so they could build a mini mall. (THank goodness Graziano put an end to that!)

HA! is that what he told the Bayside residents when he tried to put in a high school in the worst location where all the residents were opposed to it?

HA! Is that what he tells his clients while he is working as a laywer for them.

Ahhh Paul, the Fredo of the Vallone Family, he needed a job, so they got him a council seat...he even sold out his own damn family and became a county lapdog...even his father, the speaker, and his brother, Peter Jr...never took the county endorsement, and never bowed before that shaved gorilla Joe Crowley. If Graziano would just get a haircut and lose that damn ponytail people would take him seriously. Maybe, just maybe the people of this district are fed up enough to vote for an true independent candidate. My fear is the turnout will be as low in the general election as the primary and the county turnout machine will prevail again. Queens need real independent voices, not these pathetic mongrels who do the bidding of Crowley, Stavisky, Michael Reich, Frank Bolz, And Gerard Sweeney (The Unholy Trinity Born of Jackals) and all of the salivating developers. Our neighborhoods are turning to crap, drunken and dope ridden bums roam the streets and sleep under the eleveated subways and in the stations, perverts leer at our wives, girlfriends and daughters, are parks are in disrepair and disarray, and our schools are substandard. There is no such thing as any sort of moral code anymore. Basic manners and decency have fallen by the wayside. It's really gotten extremely difficult to raise a family in Queens. I fear and ache for my teenage children. I thank God they have good heads on their shoulders. I have had enough of this and of the mediocre leadership that has been foisted upon us. I am going to vote, and I am going to vote my choice. I'm not in Bayside, but in LIC/Astoria. Trust me, I won't be voting for VanBramer. OR DeBlasio, Katz, or the heavy woman, what's here name, oy yeah Tish James. Vote your choice. Send a message. We've had enough of this BS

If Vallone gets in again put your house on the market and get out.

I have seen the light. Voted for Vallone in the primary but it’s over. Have heard personal stories of his incompetence these past few weeks and I am disgusted. Using these next few weeks through all social media and interaction to spread the word about what a disgrace this guy really is. I’m pretty sure i’ll be able to get at least 60 or 70 Vallone people to vote Graziano, pony tail and all.

I knew Vallone back when our daughters attended elementary school together. He wasn’t a friend but I’d see him at school events from time to time and what always struck me as funny was that all the people who were supposedly his friends at the school talked shit about him all the time. Nasty, nasty comments. I asked one of them about it and he said the friendliness was all an act for the kids sake and that he’d never vote that douche into office. Douche. Spoken by a “friend”. Hard to believe this guy has squeaked through. Hoping people come out on Election Day and vote for Graziano. He seems a bit quirky but I don’t doubt his allegiance for a second.

Sure of that, when it comes screwing everybody, NE Queens residents are the first in line.