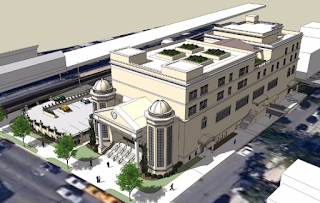 In September 2016, the Universal Church, on 69th Street and Roosevelt Avenue, had proposed to expand itself right in the heart of the Woodside community. The proposed structure of the “megachurch” would stand 70-feet high, taller than any surrounding building in the area. Not only would such a development be out-of-context in Woodside, but it would also break New York City building code that limits the height of building construction. It would set a dangerous precedent for commercialization and future development in the Woodside Community. And as a result would encourage gentrification and the displacement of residents especially working-class immigrant families. Organizations in New York City, such as Queens Anti-Gentrification Project (QAGP), Filipino American Democratic Club of New York, National Alliance of Filipino Concerns (NAFCON), and Anakbayan New York (ABNY) had convened with the Woodside community in response and strong opposition to this proposed development. In turn, these progressive community organizations and allies formed the Coalition to Defend Little Manila, dedicated to fight against the construction and expansion of this “megachurch” and its threats of gentrification of Woodside and displacement of its working-class migrant residents.

On January 5th, Community Board 2 (CB2), representing the Woodside, Sunnyside, and Long Island City neighborhoods, held its regular meeting with the megachurch proposal on its agenda. At that time, ABNY mobilized its members alongside the Woodside community in a speakout and rally against the megachurch construction to emphasize that it is the community who will decide what happens in Woodside, and the megachurch proposal was pushed to February 3rd. On February 3rd, the Coalition alongside Woodside residents mobilized to voice their concerns and dissent against the megachurch, and CB2 unanimously voted against the proposal. The Universal Church had then submitted its application to the Board of Standards and Appeals (BSA), asking for a variance to expand the church beyond the jurisdiction of CB2 and bypassing NYC zoning laws and building code. ABNY had successfully submitted a request to BSA dismissing the application on June 7, 2017, making it even harder for the Universal Church to continue forward in their development.

We are humbled by the support of the community in this fight. It was not CB2 nor the BSA that had defeated the megachurch development. It was the Woodside community, its residents and business owners, that had voiced their concerns by petitioning against it, by attending Community Board meetings, and sharing with members of the Coalition how they opposed such a development in their community. It was the community, and it is only ever the community, who can truly lead in its own defense, protection, and development. We understand that this small victory is but one step in a larger struggle against gentrification and displacement and that only with the support of the people can we achieve real victories in this fight.
Posted by Queens Crapper at 1:21 AM

I bet if it was a mosque instead of a church all these groups opposed to it would be for it.

Well, head over to Jamaica then, because the dirt-bag community allows all kind of bullshit without blinking an eye. I am sure there would not be any opposition to that there and in fact the crooked leaders would welcome it with open arms.

Who the hell are they? Moonies? Scientologists? What non-profit scam are they fronting?

This is what happens when CB2 doesn't get their cut. Too bad the immigrant community could care less about tenants rights.

Color me surprised, but happy for woodside and its hard working residents. Giant churches, we do not need, but to remain as lightly, relatively speaking, populated and low rise as possible with old stock of housing maintained intact for future generations of small families to steward and appreciate. I highly recommend house of inasal for breakfast.

Fucking churches are for people to fucking stupid to think for themselves. They are totally irrelevant and have been since the beginning of time.


One can be spiritual or even below in a non-existence god if they want to, but what do you need an actual physical building for this. YOU DON'. Church and religion are for stupid people who want to think that life goes on after we are food for worms.