Koslowitz opposed to homeless shelter, but ok with jail in Kew Gardens 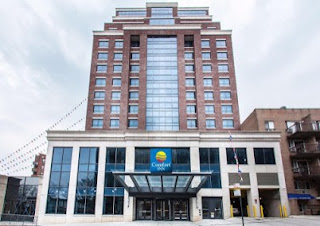 The Department of Homeless Services has moved 42 homeless single men into the Comfort Inn at 123-28 82 Ave. in Kew Gardens, just across the street from Borough Hall, according to Councilwoman Karen Koslowitz (D-Forest Hills).

The lawmaker told the Chronicle on Monday that the individuals were moved into the facility on Saturday, one day after the DHS and the Mayor's Office told her about the plan.

"I asked them how could they do this. They called me right before a religious holiday," Koslowitz said referring to Yom Kippur, which began at sundown on Friday. "You call me right before a holiday that I observe so I can't do anything about it? That's not right.

Wow, Karen sure is upset! Yet she signed this dopey letter along with a bunch of other Queens tweeders (facing minimal to no opposition in November) to show support of Liz Crowley's stupid request to put a community jail in the same area:

The Kew Gardens complex is too small to hold the inmates that Queens would be responsible for and the City is reportedly already looking at multiple sites. Let's do the math...10 jails currently on Rikers Island, and 5 boroughs (minus Staten Island which BDB announced wouldn't get any)...

You'd think as lawmakers they would hammer out the details on where the replacement jails will go BEFORE throwing their support behind the Dope from Park Slope's plant to close Rikers, but then again, THIS IS QUEENS where the promotion of real estate deals always comes before any kind of responsible representation.
Posted by Queens Crapper at 12:35 AM

The opposition is divided. DeBlasio will probably be a shoo-in. Just like the idiot collectivist rode in on his son's afro.

What a shock, who could have seen that coming.

You want to fight it Karen, endorse the mayors opponent.

So let me get something straight: according to Koslowitz the detention complex, which is in an ideal location next to mass transit for income-qualifying apartments and is quiet at night after public offices close, should be resurrected into a jail with constant activity so that Riker's Island, which is an idea detention center location in a remote bottlenecked island, can be sold off for tax breaks to create apartments? Also, why also is Koslowitz so upset about this shelter and not Briarwood Residence a mere few hundred feet away?

""You call me right before a holiday that I observe..."
So she observes Yom Kippur. But does she keep kosher and is she a Sabbath observant, like most of her constituents?

We need to take a more active role in managing the mentally ill, including homeless. Once someone has been treated or sheltered they should get an iris scan so they can be redirected to help as quickly as possible once they go off again.

Hey, check this out:

The city wants the homeless to get out of town — and is offering to pay a full year’s rent to those willing to abandon the five boroughs.

There already is a jail in Kew Gardens, right next to the courthouse. Expanding it is no big deal.
I can see the reasoning too. Jail residents don't get kicked out during the day to wander the streets of the neighborhood.

Their friends, kin, and associates are free to roam the area after visiting. Prisons. Rikers is a complex unto itself, with strict and easy to enforce entry and exit. Also, Rikers manages 100,000 admissions per year and an average daily population of 10,000 inmates, so there is a steady stream of people getting "kicked out" because they serve shorter sentences. Prisons are best placed away from places frequented by businesses and homes on roads that are easy to navigate, but where there is no legitimate reason to hang around if your official business there is finished. The island is the perfect place for such a prison, not Queens Boulevard.

Wow, Karen, you shameless sellout. I hope you davened REALLY WELL on Yom Kippur, because you certainly got some splainin' to do--to G-d and to your sold-out constituents. Who living in a really nice neighborhood needs a jail right in the midst of it? Especially when Rikers Island is an isolated place, with minimal access to populated areas? How much potential is there for harm to the community from escapees and dangerous activity associated with the housing of CRIMINALS near a place teeming with peoples' children? Let's identify this for what it REALLY is---DeDumDum, The Dope From Park Slope, figures he'll make up a credible reason to empty out Rikers Island---so his REAL ESTATE DEVELOPER MASTERS CAN DEVELOP IT. That's the real reason for this haste in vacating Rikers. Just exactly like he was in favor of abolishing the carriage horse trade. Had NOTHING to do with the welfare of the horses, but had everything to do with his greedy real estate developer handlers getting access to the valuable land the horses' stable occupied. There is no low to which this slimeball will stoop to please his real estate developer donors and there is no limit to how insane he will go to institute his stinking libtard progressive agenda. Can't we find someone better? Or must we scrape the very very bottom of the barrel, a barrel filled with stinking rotting garbage, for filling leadership positions?

That old fuck deserves to be in jail'

Let's not forget the author of the letter -- Dizzy Lizzy -- not so Dizzy when you consider the piles of cash that she'll get from the developers. Vote her OUT!!!

if she agrees with Dizzy Lizzy there's a problem!