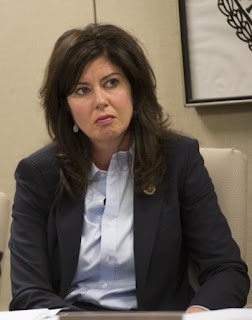 The plan was never shared by Crowley with the residents of Kew Gardens and was apparently kept secret until its sudden release this week to the Mayor.

When the benign Queens House of Detention existed as part of our Civic Center until fifteen years ago it housed persons awaiting trial for very short stays; they were not likely to have many family visitors. And for those who came by car, there was plenty of parking nearby in the 900+ car Municipal Garage, now gone. The 307-car parking lot to open next year will be occupied by City and Court employees and by jurors; the streets of Kew Gardens will be scoured for non-existent parking spaces!

Kew Gardens’ residents accepted the House of Detention as a holding facility; it posed no serious problem. When District Attorney Richard Brown suggested that converting the building to office space for his agency would save the City a lot of money it is now paying for rent elsewhere, it seemed to make sense. We respect Judge Brown and think he should be taken seriously.

After the brouhaha last Spring when the distribution of Rikers’ prisoners was a headline topic, it was said that our Kew Gardens facility was not nearly big enough to accommodate enough prisoners from Queens; that the facility was outdated, that it would need to be demolished and rebuilt and that Kew Gardens could not provide enough prisoners to warrant a ”neighborhood prison,” one of the goals voiced for the break-up of Rikers. What happened??

In just the two days since the Crowley letter was made available we have received numerous replies from our members, all of whom are opposed to reopening the House of Detention. If community opinion is to mean anything, this project should be shelved.

Hey, good for her. Keep the jail out of our district. See if Kew Gardens will take the shelters too

I can't believe anybody heard about this, nobody ever listens to Dizzy Lizzy
The stupid sheeple will reelect her and her stupid shiny trains and jails in our backyards

She lives in Forest Hills so it's not a problem for her. And it's not like she takes the subway to work.

What would it take for a community to support a new jail?

I mean, has a community every said, "yes, we are behind building this jail" ?
Most likely not.

So how do new jails get built then?

An angrily worded letter, that will show 'em who's boss.

Sorry KG you need to get boots on the ground. Take a page from Maspeth. Just be ready to be called every nasty name in the book by your liberal brethren.

And why no mention of KG's council member Karen the Clown Koslowitz in this letter. Didn't she sign off on the prison scheme?

BP Melinda Katz is NOT paid to think, only to do as told by the Machine. No free independent thinking here and looking out for the constituents who pay her hefty salary for doing NOTHING.

Lizzy is good at keeping secrets. She didn't inform the people in Kew Gardens, just like she didn't inform the people of Maspeth that the Holiday Inn was charted to be a homeless shelter. All she's concerned about these days is getting re-elected. People better wake up and realize that their local politicians are only in it for themselves and their pocketbooks. As for our Borough President -- she's totally clueless. She's busy working on her re-election. Vote out all incumbents come November. If you don't, you get the government you deserve.

Well the good residents an oppose it as much as they want (and they should), but it will happen... she is the cousin of Boss Virginia Joe Crowley...if he wants the jail...then the jail gets built...unless the county minions beg Joe not to have it built...then there will be favors exchanged and loyalty oaths exchanged...something will be built, and the residents will get screwed..that's how it works in Queens...for all those who are hoping these Third Party candidates pull off a surprise on election day, it's a pipe dream...the turnout will be low and the odds are stacked against them. We are getting set up for another four years of criminality, treachery and mediocrity in city government and Queens. The BS pile is just getting higher...hold your nose because it stinks.

So what is the point of the community review? Even if you were notified you wouldn't approve it. You might as well skip right to the protest step.

The bigger question is Why isn't the closing of Riker's Island on a ballot on Election Day? Taxpayers should decide if it should be closed, or if it should be rehabbed. People invest in their neighborhoods. Our property taxes are through the roof. Build a prison in your neighborhood and there goes your investment. Why can't the people decide this issue? Is it because lots of money from developers can be made by politicians? It's always about the money and looks like if DeBlasio and Crowley get re-elected, the taxpayers stand to lose. Get out and vote people.

Why should politicians decide what's best for us in our neighborhoods. Why can't they remedy what's wrong at Rikers and correct it? The prison is isolated on Rikers. Why bring all these criminals into residential neighborhoods? It's just a land grab. All these developers are in the politician's pockets.

The problem with homeless shelters in particular is that there are alot of mentally ill and/or chemically addicted people placed in these shelters with minimal services and security. When they get loose in a neighborhood, residents suffer. The mayor and others like to say hat objecting residents are NIMBYs but nobody should feel insulted for standing up for their neighborhood or quality of life. Fix the security issues and maybe people won't object to these facilities.

Well....the court is there already

Sure the court is there already and all we need in our neighborhoods (KW, CP) are the repeat offender criminals and their criminal relatives that will be trapsing around. Rikers was isolated and there was no neighborhood for any of these people to wonder around in - that's the point that these politicians don't get. If they can't police the shelters how can we expect them to police a jail facility in a residential area.

In so far as Crowely and her friends and family - they're criminals themselves so why would they get it. Vote the cronies out.

Who in Queens didn't have a bad breakup with Crowley at some point or another...

Fix Rikers or get the State/Feds to take it over. If the city can't run the Jail in one location what makes them think the can run them better spread out all over the city ? Total bull ! It's a land grab for big developers with deep pockets.

You gotta do better than that son.

Her mouth has a lot of mileage.

Call this naivete, but I believe that Ms. Crowley and her corrupt congressman cousin and every other neoliberal scumbag in city council are going to regret circumventing the laws they broke with their shady financial dealings and pay for play services to remain in office. I have a feeling that all this is going to blow up in their faces next year.

Frankly, if there are going to be local jails, they should be filled with these corrupt politicians, that way the constituency can stop by there on their free time to visit them, gawk and mock them and even throw shit at them as if they were carny attractions like shoot the freak or a dunking booth.


Why then don't we let the voters decided where to put a prison?

2) Because people that live in Manhattan will out-vote everyone unless all the boroughs vote to put the jail in Manhattan.

A third party research company from another state should do the analysis and the government should be bound to their decision. It takes all conflicts of interest out of the equation.

To JQ: Face it, the peasants, and feudal system that so enslaves them in Queens County (and beyond), will never die——so unlike the taxpayers' themselves, all of whom are at the mercy of NOT ONLY a system of complete 'taxation WITHOUT representation,' but a two-party-machine-failed duopoly of infantile, unresponsive tyrants that continues to reign supreme like an actual mob crime family ring——although the government bought henchmen have perfected the system of organized crime, to the point where it's now LEGAL for these openly practicing, voracious, predatory and rapacious thieves to 'tax 'n terrorize' their constituency with impunity, of which only less than half now bother to vote in the first place, because the system is so completely rigged to fail its citizenry.

Which is also the reason for why lawlessness, vigilantism, violence and anarchy are on the rise, BECAUSE of the lawlessness, anarchy, corruption, graft and greed that never left the filthy, power-seized corridors of City Hall and Albany, both behemoths of which now DEVALUE all honesty itself——and, the public be damned (again and STILL)!

Now, whenever I think about the willfuly terrorizing and dehumanizing horrors of any and all Queens County political dynasties (i.e., Dizzy Lizzy and Joe Crowley, the Acidic Addabbos, the Valones of Planet Vallonia, the Audrey Pheffer/Stacey Pheffer Amato clan, etc., etc.)——as if regular, daily terrorism and 'taxation WITHOUT representation' by ALL of my locally failed politicians (not public servants), wasn't enough!——I think INSTANTLY of the 1997 horror movie entitled, 'The Demon Seed,' starring Julie Christie.