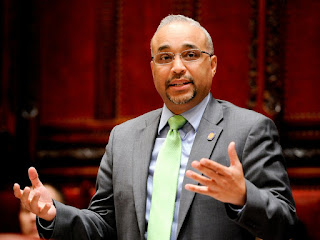 Roosevelt Avenue in Jackson Heights is widely regarded as a hotbed of prostitution and human trafficking. And state Sen. Jose Peralta (D-East Elmhurst) wants to give law enforcement another tool to crack down on businesses acting as a front for the problem.

The lawmaker has introduced legislation mandating massage parlors to get a license from the New York Department of State that allows them to operate, a practice required for many businesses. According to Peralta, some — but not all, he emphasized — of the parlors are fronts for prostitution. One thing he pointed out about some of the businesses is that people on the street pass out cards for them late at night.

“The legitimate places are open from, like, 8 a.m. to 8 p.m.,” the senator told the Chronicle. “These folks are open late at night. In particular over the weekend; one o’clock in the morning, they’re still operating.”

Many constituents weary of the massage parlors have complained about them to his office, Peralta added.

His bill would make massage parlors get four-year licenses from the state, which they would have to display, showing customers that they are complying with the regulation. The businesses would also have to get a bond or liability insurance.

Massage parlors operating without the license will not be taken lightly: The punishment could be paying $2,500 and spending six months behind bars.
Posted by Queens Crapper at 12:09 AM

Ask his constituents if he's done enough to curb the unlicensed street vendors on Roosevelt avenue or the drug trafficking on 37th ave. He hasnt done shit for us. He's a POS progressive, a fucking sell out!!

what's the difference between a politician & a prostitute?

if you die, the prostitue stops screwing you!

AND just like DOB and other shitty city agencies, nothing will be enforced and no fines will be collected. WHAT is the point of such bullshit when the MAJOR ISSUE is ENFORCEMENT of LAWS and actually collecting fines. I mean why keep coming up with bills and new laws if the enforcement aspect is not happening. Illegal conversions come to mind...........

ROOSEVELT AVENUE IS DISGUSTING. IT'S OUT IF CONTROL!

I don't get the redundancy of this proposed legislation. The practice of any of the professions that require a license from the state education department (medicine, interior design, accountancy, dentistry and massage therapy to name a few of the over 40 professions) without a license is already an E felony, punishable by fine or imprisonment or both.

To last Anonymous: Yes, the prostitute stops screwing you when you die, but the politicians continue to get paid for screwing everyone else, without actually screwing them in the same way that the prostitute does, which at least involves some pleasure.

In other words, the prostitutes have to actually work for their pay, versus the political filth, all of whom hardly work, as they screw you 'till it hurts (and it always does)!

"Many constituents weary of the massage parlors have complained about them to his office, Peralta added."

What? He wasn't "weary" of them first? The people leading the leader?

This is big news? These places have been operating for years and everybody knows exactly what is going on there, it is so blatant. Hell, there is one is Astoria right across the street from a Catholic church. They are in storefronts, residential neighborhoods, they advertise online, in local newspapers, postcards and business cards being handed out in the streets. This has been going on for years. It's prostitution plain and simple. Peralta is just trying to score some points. He's pretty much useless as a legislator, he's pissed county off, so he's trying to score something that resembles an accomplishment. As for these establishments, obviously someone in law enforcement, the government, and elsewhere is being paid off to look the other way. Organized crime of some sort is involved. Those providing the services (the women working in these establishments) have most likely been trafficked into this country. The so-called progressives, especially the women who so loudly complain and talk about injustice talk a lot of about this trafficking problem, but nothing ever seems to actually get done about. I wonder why that is?

We need to decriminalize prostitution. Sex workers should be able to work legally . I'm not taking about minors and sexual slavery .

How about deporting more and then maybe we can get somewhere?

They are on grand ave and metropolitan ave..till all hours of the night. .whose going for massage at 3am..no one...but for sex they are ...so much for quality of life!!!

ROOSEVELT AVENUE IS THE 42ND STREET OF TODAY.

This is a great idea!

Just like how background checks and waiting periods have eliminated ALL gun violence!

State Senator Peralta is a GENIUS!!!!