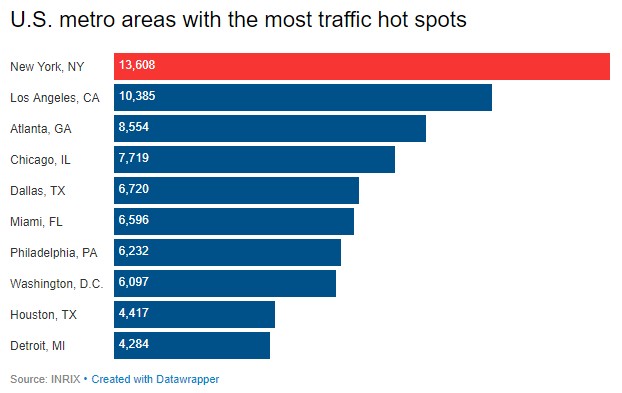 New York's gridlock issues are getting worse, and a new study details just how widespread the congestion problem is. According to transportation analytics company INRIX, more traffic bottleneck points are scattered throughout the city and its surrounding suburbs than in any other metro area in the country.

On the bright side, New York's hot spots do not lead the way in the magnitude of adversity created by traffic. According to a measure from INRIX called "impact factor" that incorporates the frequency, size and duration of jams, Los Angeles drivers deal with the worst traffic conditions in the nation. The impact factor in the City of Angels is 42% greater than in No. 2 New York. When impact factor is evaluated on a per-capita basis, the metro area comes out looking even better: New York is ranked 17th, below Los Angeles, Atlanta and even Stamford, Conn.

But New York still has some of the country's worst locations for gridlock, including stretches across four local highways that rank among the country's 25 most miserable. That includes two Cross Bronx Expressway spots whose jams force vehicles to spend an average of 155 minutes traversing just 3.5 miles. Between the wasted fuel, lost time and damage incurred by carbon emissions, INRIX estimates that the pair of congested locations will impose a cost of $1.7 billion through 2026 if unaddressed. Overall, New York's thousands of traffic hot spots could lead to $63.9 billion in economic loss over the next 10 years.
Posted by Queens Crapper at 6:59 AM

Obviously the only solution to all this traffic is to create more bike lanes.

Fear not, the City Planners have it under control, bike lanes everywhere.

The scary thing about urban overcrowding is the worse traffic gets the more it leads to people moving back to the inner city to avoid lengthy commute. As a result we now have 30 something's living frat house style back in the inner city. NYC is not exploding, it is imploding. Me, I'm going up the country.

Vision Zero Miles per Hour is working perfectly towards its ultimate goal. Such a wonderful Government program who's purpose is to eliminate vehicles and drivers. The never ending problem of bureaucrats is that they never consider the unintended consequences of their actions! Or perhaps they do. It provides job security by ever having to fix the problems they initially created.

This is just another example of an incentive for businesses to pack up, pick up, and move elsewhere, taking their capital moneys, and tax moneys with them.

The relocated businesses, of course, leave their former employees to be taken care of by the city that caused the incredible disincentive!
Creating more customers at the local homeless shelter.

With the costs of taxes, utilities (highest in the nation) insurance, labor, and now confirmed, transportation why would anyone start any business in this Godforsaken city, other than a homeless shelter, the only real profitable business model around with endless free government moneys...

Downtown Flooshing is one of the worst!
Just keep on building those "luxury" vertical beehives.

Don't forget to throw in some terrible Jet noise and air pollution !

Not to sure about these statistics.
Los Angeles has highways around it and wen you get stuck on those it is not city blocks but MILES before you can even get off. Rush hour in LA is like having 3 LIEs backed up from Manhattan to Exit 50 or LAX all the way to the Valley. To add NO SERVICE ROADS and side streets wont help you because the whole city was planned and laid out like shit.

Nothing I experienced on the LIE, BQE, Van Wyck or whole country matches the horrid traffic of Los Angeles.

Too many people and too many livery cars. Calling ICE.....

Whats wrong with livery cars ?
They are the only one around when you need them and cost the same.
Try getting a cab at Woodside LIRR station at 1AM the yellow cabs will only take you to Manhattan or near a airport, the TLC laws mean nothing