Queens newspaper publisher may do 20 years in prison 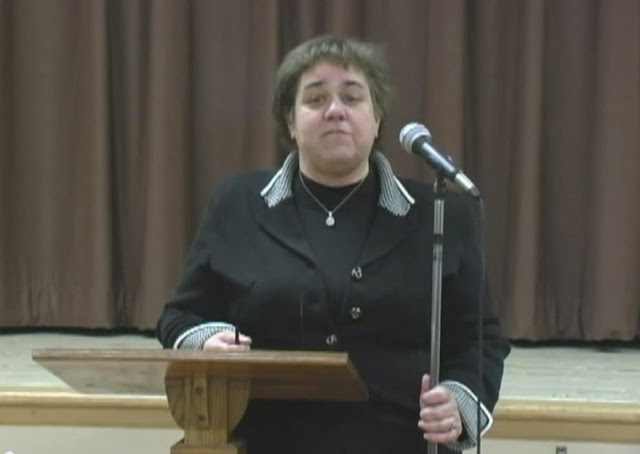 A Queens newspaper publisher found herself on the wrong side of a headline after authorities said she was messing with the mob.

Patricia Adams, publisher of The Forum, was arrested Wednesday on a charge of witness tampering in a bizarre offshoot of a loansharking case involving the Bonanno crime family, according to Brooklyn federal prosecutors.

Instead of simply signing off on a story about the scheme, Adams became a key player, using her weekly newspaper to bully a woman out of testifying against a Bonanno associate accused of sexually harassing the woman at his Broad Channel deli.

The harassment accusation against Robert Pisani threatened the freedom he enjoyed after posting $500,000 bail in a $26 million loansharking scheme in and around Howard Beach, officials said.

Adams allegedly stepped in, and tried to make the woman’s father talk his daughter out of cooperating with federal law enforcement.

Days ahead of Pisani’s bail revocation hearing, the local newswoman played hardball with the victim’s dad and said she’d dirty up the daughter in her paper, prosecutors said.

Judge Brian Cogan agreed to release Adams late Wednesday on $150,000 bond. Adams also had to put up her house as collateral.

She’ll be under house arrest, so if she wants to go out and interview people for the paper, she’ll have to get the green light from pretrial services, Cogan said.

Adams is looking at up to 20 years if convicted.
Posted by Queens Crapper at 5:25 AM

That's the last time I pick up this rag at the ATM.

Another piece of evidence that shows you do not need to be intelligent to be a journalist or news publisher.

Perhaps she can get a job in the prison library...

Isn't she the one who set fire to her neighbors car a couple of years ago?

Never heard of The Forum.

I'm just surprised the Italian mafia is still around in NYC. Expected Chinese.

She might do 20 years! Yeah and monkey's might fly outta Crowleys butt. Pat Adams won't see the inside of a cell....

You're wrong, last Anonymous! Not only has Adams and her ugly mug been locked up before (overnight), but she's headed back to the 'Sistah-hood' with greater speed and efficiency, exactly like her equally crooked pal, Al Stabile (when he was ONLY a walking corpse, and not an actual one - may that dirty slug never rest in peace)!

Actually, this mendacious filth, who laughably refers to herself as a newspaper journalist (I wouldn't wrap fish in that rag!), as I have correctly observed over the years, has always looked like Stabile HIMSELF in drag (and really HEINOUS drag, at that)!

Now, karma finally caught up with this ugly coward who lives an even uglier life! Good riddance to rubbish like this that needs to be incinerated--a bully and demon seed to the bitter end!

Isn't she a player with the Haggerty mob of the Qns GOP?

To the coward above that will not post their name...please do not compare my father Al stabile to that trash Pat Adams...seems like you are the biggest loser of them all that can only talk shit without posting your name to it.

To Connie Kelly: Now, I am sorry that my comment upset you so much, and please stop me if you've already heard this before, but wasn't it your father himself who 'hired' "...that trash Pat Adams..." in the first place (and kept her on the city payroll until the end)?

Sadly, all politicians are 'friendly robbers,' and as much as your dad was fairly well liked, I am sorry to say that he was but one out of too many other establishment-rigged, self-serving politicians, all of whom reinforced and cemented why Queens County's entrenched, pay-to-play system continues to remain the same, toxic raw sewage plant that it is today, and one that has completely destroyed all pretense of public trust, ethics, integrity, accountability and transparency, so very long ago. That is why nothing ever changes - because nothing ever changes. Worse, everyone else continues to pay a never ending price when politicians play fast and loose with other people's money.

Now, admittedly, Al Stabile was far from alone, and I certainly didn't single him out. But, Pat Adams has a long and menacing history as a vile, corrupt, dishonest bully, and given that she worked for your dad for as many years as she did, hardly absolves your father for cavorting and paying a nasty piece of work like Pat (she was even like that when she worked for him, and she wasn't the ONLY nasty one on the payroll - Joann, whatever her last name was, was just as dismissive and hostile!), regardless of whatever good that he may have produced for his constituency, and the many who continue to recognize his record (good, bad or indifferent)!

Now, I didn't mean to upset you, Ms. Kelly. But, I had to be honest. Your father let me and my family down in a big way, and we paid the ultimate price for his 'look the other way' approach to a serious matter from which we never recovered, when the outcome could have been so differently.

In the end, former NYPD cop Frank Serpico was right when he said a few years ago (when he was re-interviewed by the Daily News): "Corruption never ends in New York City." And, naturally he was right...

Oh, and by the way, I am not a coward - quite the opposite! People who don't tell the truth and cover up corruption are cowards. I'm the one who exposes other people's corruption, while talking truth to power, and risking my own safety to do it. How many people have you ever known like that in your lifetime?

Unknown said...
This comment has been removed by the author.
Saturday, August 19, 2017

In response to what u wrote to me u r entitled to ur opinion of my dad and that is fine...but what u said "May that dirty slug never rest in peace" to me that is a horrible thing to say about anyone...sorry my father wasn't able to help u with whatever problem u had at that time...but I will tell u this I have nothing to say about pat adams to me it isn't worth the time or effort to type about her...but what I will say since u wish for my father to not rest in peace I hope every night of the rest of ur life he haunts u in ur dreams!!!

"since u wish for my father to not rest in peace I hope every night of the rest of ur life he haunts u in ur dreams!!!"

To the Anonymous who wished for Kelly's father not to rest in peace:

It's quite apparent that Kelly has wished for the spirit world to haunt you.

Perhaps you should make an appointment with the Long Island Medium.

Two months instead of the rest of your life.

As usual, Connie Kelly, you have chosen to shoot the messenger, instead of looking closely at the misdeeds of your father, who was in an absolute position of power and privilege to help me and my family, but chose to do nothing - a dereliction of public duty, which caused decades of human misery for me and my family BECAUSE of your father's defiance and apathy. Don't shoot the messenger, then, and it is in fact your OWNfather who should never rest in peace, NOT I! Sadly, your father is far from alone when it comes to looking the other way on corruption, graft and greed, as ALL politicians betray public trust with impunity!

But, oh what a dramatic difference Big Al could have made for me and my languishing family when we needed help during its most urgent hour of compliance, where the damage that he caused us from 1997 to the present STILL continues to force my innocent family to pay a soul-crushing price.

Even hell is too good for people who willfully look the other way on their constituents!