Now we have "rogue bikesharing" 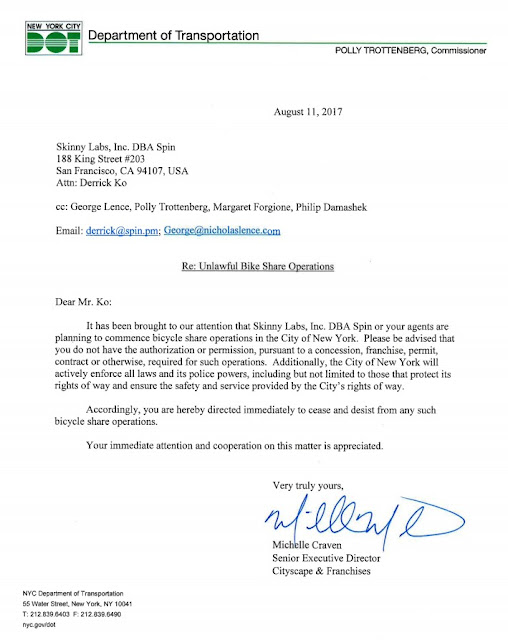 A California company will dump 300 dockless share bikes across the Big Apple on Monday — and they don’t have permission from the city to do it.

Spin, a San Francisco-based company, will drop 150 rigs throughout Manhattan and Brooklyn and another 150 in the Rockaways, according to City Councilman Eric Ulrich, who is in favor of the company moving in even though New York has a contract with Citi Bike.

“Bike sharing represents the future, and I don’t believe we should be protecting Citi Bike as a monopoly,” said Ulrich. “Citi Bike has a contract to have docks on city property and that’s fine, but the city has to let bike riders and New Yorkers decide who they want to pay.”

Unlike Citi Bikes, which must be picked up from and brought back to a station after each use, dockless bikeshare companies use cycles with self-locking technology that customers can access through an app. They can then pick up and leave the bikes anywhere.

Transit advocates fear dockless bikes could be a disaster.

“They litter the streets everywhere they go,” said a source familiar with the operations. “They have to go somewhere and they end up in the middle of sidewalks and in dumpsters and in the way of everything.”

At least five rogue dockless bike companies have been sniffing around the city and buttering up officials since the spring, officials have said. Spin will be the first to actually set up shop here.

This is funny. If it's Spin or nothing, the Rockaways should have nothing, according to DOT. Also humorous is the unnamed transit advocate who claims these bikes will end up in the middle of sidewalks and in dumpsters. What?
Posted by Queens Crapper at 12:53 AM


If the DOT and the city is so concerned that their precious Shitibike will lose business if people choose something else. Why didn't Shiti put some docks in Rockaway in the first place or in other transit starved areas (yes there are buses, but our officials obviously don't acknowledge them). Why don't they put some docks in Brownsville, Washington Heights, Morrisania or even Eric's Ozone Park.

The thing about these other bike sharing companies is that a lot of bikes are pretty crappy and customers treat them literally like garbage. Shitibikes are crappy also, but these bike shares don't waste parking spaces for cars.

Id like to steal a sanitation truck( very easy) and mow those citi bike docks over.

If they donate $2,500 to Diblasio's re-election campaign its all good.

It will be allowed to happen once the "honest graft" is distributed, Because you know... BIKES!
Bicycle lobbyists get away with anything in NYC thanks to Reynoso, DeBlasio and the rest of their crowd.

Wow! Just WOW! Now, who could claim to be surprised by 'rogue bikesharing' when for the past 50-plus years, all New York City and New York State taxpaying residents have 'rogue politicians' (not public servants), all of whom created (actually, they FOISTED), the political model of: Private Splendor (for themselves), versus Public Squalor (for everyone else), and the public be damned (again and STILL)?

Really, Queens Crappers, THIS IS NEW?

And, BRAVA to second Anonymous from bottom for giving me the idea to steal a sanitation truck and mow down those bike docks with great speed and efficiency (along with the crooked-and-corrupt politicians who so ordered this latest fiasco)!

Councilman Ulrich really needs to focus on the needs of the communities he serves than the needs of the tourists. No doubt the city would rather have the shiti monopoly on bike sharing, but the concept behind this bike share is a bit nuts and lousy. You basically can leave the bike anywhere, which could mean lying on the sidewalk, up against the wall or on the street, which will cause lots of pollution and theft, despite the supposed effectiveness of the locking systems (crooks can just pick up the bikes and walk or drive away).

This could be brilliant or it could be disastrous. How has their method worked in other cities?

To JQ: Councilboy Eric Ulrich is the quintessential, class A narcissist: Arrogant, deceitful, manipulative, greedy, selfish, cowardly, passive aggressive, exclusionary, intolerant extremist amateur, as well as an elitist, intensely incompetent, party-machine owned and operated, corrupt, confabulating, dishonest, dishonorable, disloyal, disrespectful (to flag, country and Constitution), derelict (of all public, oath swearing duty), detached, dissembling, evasive, elusive, false, fake, failed, fledgling, solipsistic, devoid of human decency, hostile, imperious, unrepentant (ironic, since he was headed at one time to the priesthood, BEFORE Satan and devil worship entered his ravaged-and-tonsured soul, that is), unapologetic and profoundly disenfranchised from a constituency (of whom I am one), that he simply refuses to help, much less acknowledge, while padding his city council, 'Friends & Family' payroll with the most idiotic, like minded, aggressively incompetent cowards of epic fail!

And, we the overburdened taxpayer get ALL of this collective waste of skin (that continues to deplete the Earth of precious oxygen!), for the bargain price of $165,000 a year——COMPLIMENTS of the greatest mayoral stooge (and shameless, arrogant bully and hopeless incompetent) of them all: Comrade Bill de Blasio!

And, now, repeat after me, Queens Crappers (and beyond): A-B-C-D: Anyone But Comrade (Bill) de Blasio——and I mean ANYONE——unless, of course you like living in a totalitarian, dictatorship, monarchy rule (and police state) of anarchy, helplessness and being sucked into a vortex of rage and despair, which in THAT case: NEVER MIND!

Say this is not so!

Fear not, this free market rebellion will be quelled!!!

Communist China is more capitalist than NYC on this: http://www.scmp.com/news/hong-kong/economy/article/2099894/hong-kong-bike-sharing-market-accelerates-new-players-and

Does anyone really doubt that unsecured bikes will not end up trashed within days?