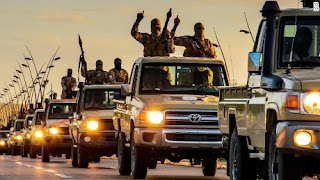 Parveg Ahmed was deported back to the US from Saudia Arabia on Monday as he attempted to cross into Syria to joint the militant group, according to a newly unsealed indictment.

The Ozone Park man left a message for his family before traveling overseas, according to court papers, writing: “Forgive me if I was harsh/overbearing. Please remember all that I tried to teach you.”

He faces charges of attempting to provide material support to ISIS and is expected to face arraignment in Brooklyn federal court. If convicted, he faces life behind bars.

After Ahmed was taken into custody, authorities discovered disturbing images “associated with violent” groups on Ahmed’s phone, including “a picture of five men hanging by their necks with the caption ‘Gay men to be hanged,’ texts justifying attacks on the World Trade Center and a picture of the leader of ISIS, Abu Bakr al-Baghdadi.
Posted by Queens Crapper at 12:45 AM

It would be nice to know what street this was on. It looks like 97st or a street between 97 and 101 aves. And a place where I used to buy nickel bags.

They should have left his sorry ass over there, revoked his citizenship, and permanently banned any re entry into the US. Instead, tax dollars will be wasted on this and I'm sure he will be free at some point down the road.

What a waste of taxpayers' money!

After they catch these people trying to join, the government should just give them their wish and let them stay in the ISIS country. But instead of allowing them to walk free over there, they should put them right in front of the US army soldiers and let the US army soldiers do their job. Then they would deeply regret it. Why waste taxpayer dollars to let things like this sit in our prisons?

The law is the law, and should be applied equally.

If you are against this law, petition your federal representatives to rescind, replace, or adjust accordingly.

Realize we are forcing other countries to take back deported undesirable criminals here illegally.

So countries are deporting our undesirables back to us.

I am sure that some cell mates will educate him regarding his belief that gay men should be hanged...

Is he an illegal? How and when did this "Queens man" get here? Ship his ass back to wherever he came from.


Because war crimes are illegal and we are supposedly and country of laws.

Are surprised, when I walk around the neighborhood, I feel like I'm in the middle east.

Barack Hussein's liberalism is to blame.

These arrests of these traitors to fight for terrorist groups overseas is in a way, repressing their freedom of choice.

The problem with letting them go, I assume, is that the Military Industrial Complex doesn't want to make Isis and their factions and offshoots even one man stronger. Yet in the past few years, especially during the conflict in Syria, our nation has been arming terrorists. And it's still going on in Indonesia.

Maybe it's so our country will not re-institute the draft. Because if this was a real war on terror, everyone would go and fight, kind of like Israel.

This is pretty simplistic, but I'm just some dude from Queens, not Noam Chomsky

I assume, is that the Military Industrial Complex doesn't want to make Isis and their factions and offshoots even one man stronger

But they do!
Most of the herion/opium (90%) is coming from newly "eliberated" Afghanistan.
Can you spell black budget? :):)

Yo, Tony....strength is our strength!
Deport those bad hombres!