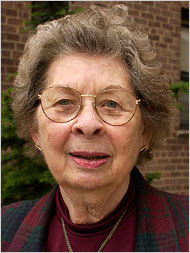 Former City Councilwoman Julia Harrison, who served as Flushing's representative in the legislative body from 1986 to 2001, died after battling an undisclosed illness on Thursday.

A self-described outspoken maverick in the legislative body, Harrison proudly told the Chronicle and other media outlets over the years that she refused to simply vote the party line on a number of issues.

For example, she was the only Queens Council member to vote against the AirTrain that runs between Jamaica and Kennedy International Airport, something she called a "disaster."

"Some of my Democratic colleagues would've liked to have gotten rid of me because I did what I thought was right," Harrison said in a 2001 interview with the Chronicle. "They consider me a loose cannon."

Her strong interest in issues such as women's health, the elderly and cleanliness in Flushing made her popular with many in the community, but her 15-year tenure in the Council was not without controversy.

Speaking to a New York Times reporter in 1996 about Flushing's changing demographics, Harrison was quoted as saying the increase in Asian immigrants amounted to "an invasion, not an assimilation" — in addition to a few other questionable remarks.
Posted by Queens Crapper at 7:52 AM

I thought I was the only one who despised the Airtrain. It just stands there collecting dust while the van wyck roads underneath are wrecked.

It's easy to think her comment about the Chinese influx comes off xenophobic. But consider the current widespread abuse of the EB-5 visa program, most recently attempted to exploit by Kushner's sister, and cash purchases of condos and houses which surely no one envisioned back in the 90's.

Harrison was quoted as saying the increase in Asian immigrants amounted to "an invasion, not an assimilation" ...That lady wins a seegarr.

I worked closely with Julia on preserving the historic RKO Keith's Flushing Theatre, and other issues pertaining to the betterment of Flushing for all of its residents.
Despite machine politics attempt to tarnish her image, she was always fair minded and aware of the differences of needs in the ethnic composition of Flushing, and always worked well with all groups to achieve harmony and genuine coexistence among all.
Her first order of business as a council member , was to found the group called, "The Network For Intergroup Harmony".
Unlike the current council member, who seeks his own advancement above the general good of ALL Flushing residents, Julia Harrison did her best for all!
She was a true public servant , not a mere political soldier. Service was her interest, and she worked hard at it.
She will be missed, but not by the political machine who reaps windfalls from the over developers who care little for Flushing's population or its infrastructure.
Many a political campaign has been funded by such rapacious developers.
"May flights of angels sing thee to thy rest".

Stark contrast to do nothing Peter Koo. He has taken mucho money from developers who have bloated Flushong beyond civilized human capacity. A sardine can for far eastern investors. They buy condos then rent them out. Doesn't Koo live in Port Washongton far from the concentration of the overcrowded downtown hub?
This wealthy phony can be barely understood when he speaks his particular dialect of Chinglish. He does not represent the varied races of Flushong only his own betterment. We have onWueems the Greay Drmoctatic Dictatorship of machine politics sucking up to developers money.

Great Lady!
Rest in peace, the angels are with you now.

Uh....where is that crook John Liu these days?
Julia would have won a third term over him if were lawful.
She took 65% of the vote in her second term despite the clubhouse trying to defame her as "anti Asian"!
Regrettably, all vestiges of a civilized Flushing passed with her.
Welcome to a stinky overpopulated third world center.
And Peter Koo, Toby Stavisly, Grace Meng fiddle while Flopshing gets flushed further down the toilet!

Dump CB7's Cuck Apelian!
Always quick with the rubber stamp of approval for over development projects.
Boy does he get his collar hot whenever called out at a meeting,
Flush that whole community board!

From now on you will never see an Occidental representative again after Toby Stavisky kicks the bucket.

They don't call the #7 train the "Orient Express" for nothing.

Objective achieved. Anti African American businesses and property owners with the aid of politicians introduced the Asians as a species to drive out the Blacks.
"Thank God for the Asians. We didn't want Flushing to become another south Jamaica".
The words of former assemblyman Morton C. Hillman. Echoed by other politicians.

The cure in that case was worse than the perceived "disease".

She tried to save Flushing.

Flushing could not be saved (but the average person could not foresee that) because all the old time property owners WANTED Asian intervention to keep Latinos and Blacks from "taking over" Flushing and diminishing the value of their properties. Gerson , Mehran, Schwartz, etc. are some of the old timers (not necessarily on board with tis agenda).
Look 'em all up. BUT....The only time Gerson put up a stink was when the building Flushing Commons on muni lot #1 was proposed. His old Chamber of Commerce building might not see as many office rentals with a shiny new project going up.
Bingo! There you have it! The Taiwanese-Chinese (i.e. Tommy Huang) also had the money to buy local politicians. Donald Manes, followed by his apt accomplice Claire Shulman were Flushing's first pall bearers.R.I.P. Flushing.
BRAVA, Julia Harrison for her brave service fighting a Democratic machine dictatorship that was FULLY behind the "colonization" as was perfectly put.
Rest in peace, dear lady!

What do you call buying politicians with Taiwanese money and taking CB7 members on a junket to Taipei?
I CALL IT COLONIZATION!
It's all a matter of record. The "fake news" story, about Flushing being "blighted" in the 1970s, was fashioned by the local real estate familes of Old Tyme white Flushing. They were afraid the "Ls and Ns" might move in.Longtime rancid racism abounds on all sides. Oops, what a contrary version of a story about freedom in Flushing.
The remaining African-American businesses were displaced. Bland Houses are being taken over by Chinese. Not that that is bad in itself, but what about the displaced Blacks who lived there?
Little by little intolerance , on the part of Chinese economic warlords, is easing out other minorities.
We DO NOT have a multicultural Flushing. It is monoculture!
Cut the B.S. This is Queens Crap where the hidden truths get exposed!

Uh......John Liu is a "little boy" who came from a rich family, with an appetite for more power than he could fit into his little boy's mouth in one bite. The Feds took care of his mayoral campaign managers and now he has a little job somewhere, befitting a "little boy".
How prophetic and smart were the folks who recognized this early in the game. We almost had a mayor who would have sold out the whole city instead of just Flushing.

The idea that , the late council member Julia Harrison, was a "bigot" is totally unfounded.
One out of context news bite and she was branded. Her staff was well represented in her district office.
Latino, Black, Chinese, Korean, Irish, Greek , Italian.....ALL AMERICANS.
FU , troll, in spades!

The Staviskys were , obviously, behind Harrison's branding. Julia whipped Toby's ass for the city council seat.
Hmmmm.....LOL.....maybe Toby didn't like hubby Leonard being far away in Albany with Julia up there too.
What a vindictive toad. Face it, with a whale like Toby Ann, I could use a little respite on the side.
Convicted criminal, Brian Mc Laughlin, did his share to malign Julia.
The Feds took his ego down. WTF is he doing now....driving a cab somewhere?
Hevesi went too. Quite a few crooked Dems served their time in the pokey.
And they all had the balls to kick Harrison?
Bless all those "loose cannons" like Julia, who keep machine politicians on their toes.
She was a moment in the conscience of all the shady crooks comprising the Great Democratic dictatorship of Queens!
I'm a registered Democrat....BUT...without healthy competition from qualified Republican candidates we have , in essence, a DICTATORSHIP. A one party dominant borough does not spell democracy in my book.

Only uncivilized peasants consider downtown Flushing as their "destination of choice". It's a destination of little choice.
You can actually get cheaper or equal accommodations in parts of Manhattan for the overpriced "privilege" of living in downtown stink town Flooshing!

Why doesn't somebody sue Peter Koo for violating residency laws. An NYC councilman who really loves in Nassau county?
Where is the FBI's anti corruption unit?

CB7....composed of tokens, bobble heads and crooks. No wonder Frushing stinks.
Then there is Chuck "follow the buck" Apelian.
Maybe he belongs in jail.

The Dem machine had to smear Julia because she was in the midst of exposing some of those crooks. She refused to play their game and was punished for it. A Stavisky stooge once referred to her as "that councilwoman who doesn't step in time".
Now CROOKED mediocrity rules the town. Peter Koo is only interested in his own. What has he done for Latino or Russian ,etc. residents? Very little. Nobody understands a word he says anyway.

An afterthought:
Councilman Peter Koo recently attended a candidates night at my civic association.
All he could talk about was himself and how he rose from washing dishes to opening up his business "Starside Drugs".
He did not really indicate what positive things he's done to improve his district.
On a few occasions, in the press, he complained about crowded sidewalks in downtown Flushing.
Have they improved?
I cannot see it. Have the unsanitary conditions of the streets been sufficiently cleaned up? Not that many could see.
So, what exactly does he do? What has he done? The before and after pictures (before his tenure and during his tenure as a Councilmember) show little change.
When is the district going to get a real hands on council member who actually goes out of their way to accomplish good things?
It's been heard that Councilman Koo is tired of hearing complaints about filthy overcrowded Flushing.
Well, councilman, start making some improvements instead of behaving like a privileged politician.
I will say this, when I personally went on at least three Flushing beautification clean up days, Julia Harrison stood beside us doing real work.
The district needs a qualified creative representative.

She was a Romanian Communist. Not Jewish, just married to one. She and her henchman Padovan said "it's not the subways that need fixing, it's the passengers." Judge Garaufis was her counsel.

More balls than all the men currently on the council.