Cuomo ok with congestion pricing (after the election) 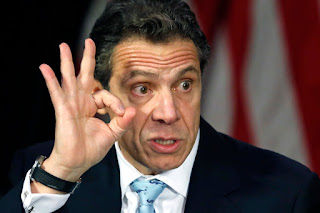 To carry out immediate repairs on NYC’s faltering subway system, $800 million in funds are needed. The state has contributed $400 million so far, and expects the city to provide the rest. While not committing to providing these funds, Mayor Bill de Blasio did propose a millionaires tax to help fund half-priced MetroCards for low-income New Yorkers.

Now Governor Andrew Cuomo is trying to pump more funds into the subway, albeit with a type of proposal that previously failed: congestion pricing. Reporters were speculating about this on Twitter last week, and Cuomo subsequently confirmed to the New York Times that he was looking to develop a congestion pricing proposal, but declined to provide details.

A previous plan on congestion pricing introduced by Mayor Michael Bloomberg got derailed in the state legislature, particularly on concerns that it unfairly favored Manhattan residents. Cuomo told the Times that his plan is inspired by that proposal, but will move in a different direction. This quote from the Times basically sums it up:

“Congestion pricing is an idea whose time has come,” Mr. Cuomo said. He declined to provide specifics about how the plan would work and what it would charge, but said that he had been meeting with “interested parties” for months and that the plan would probably be substantially different from Mr. Bloomberg’s proposal.

The Times piece also revealed that Cuomo had introduced a pilot program a few months ago to reduce the amount of trucks in Manhattan during rush hour: trucks that worked overnight got reduced tolls.
Posted by Queens Crapper at 7:05 AM

Governor Cuomo anounces a brand new tax on working New Yorkers! There'll be no cuts on pet projects and other wasteful spending of tax payers' hard earned money in order to pay for the repairs of our overpriced, overcrowded and derelict subway system. Just new taxes! That's how innovative, cost conscious, and tax payer sensitive government works! Have an emergency? Just create a brand new tax and the suckers will be forced to pay it!

I thought that the new Cashless Toll Systems were put in to make our lives better....

my neighborhood (kew gardens) will become a giant park and ride if this is approved, due to there being both lirr and express subway stops here. if at the same time the city required resident parking permits, i would be all for it. it would also get every case of car insurance fraud (cars registered in tennessee, pennsylvania and every other state) the hell out of here.

That's right, keep taxing us hardworking taxpayers and business owners into oblivion. That's all Albany knows how to do. Where are our tolls/taxes going anyway? NYS is Cuomo's Empire !

Of course those who have low income will get a break on the pricing.

This man should not get re-elected !!

This is such a disaster. I dont understand why drivers have to keep paying for mass transit.

What is urgently required here in ravaged New York State, cradle-to-grave government is for the dynastic, 'Gargoyle Andy' (of the Cuomo Colony of Crime), to be 'okay' with handcuffs slapped on his slimy, bony wrists——BEFORE the election——and, just in time to save all burned out, taxpaying vampires millions in savings through his immediate incarceration!

Savings and justice (finally) in one fell swoop! But, given that Preet Bharara (formerly Schmuck Schumer's little, legal lapdog bitch) is not growling anymore (all bark and no bite!), who will prosecute a crime family ring like the Cuomos, and their stranglehold grip on We, The People of New York State, all of whom have been living in fear, paralysis and a 'Hijack-and-Hostage' mode since Mario's son was betraying public trust with equal impunity?

As long as THIS scourge remains in power (that has been flagrantly betrayed while the taxpayer pays and pays!), then it will still be like having an uncle in the mafia, where EVERY DAY is CHRISTMAS (if, of course, you are one of the living 'Gargoyle's' failed political deadbeats looking for a government handout, like Peter Vallone, Jr., Christine Quinn, Floyd Flake, and too many other names that could fill up the yellow pages, to name in this missive)!

After payoffs and graft, maybe some of the billions can go to light up the new bridges.

I don't understand these A-holes. East River bridges need to be maintained. So do a modest 3.00 toll on them with this new computerized scanning equipment. If you are a delivery outfit that has to bounce back and forth between Brooklyn/Queens on a given day, ok..then you get hit twice in one day and that's it. This 60th St. crossover is Bullshit. Does this entitle me to the $1 million, thinking outside the box incentive? Yea, right.

Time for the "DUMP CUOMO" graffiti to reappear on every overpass in NYS again.

In 1937 the George Washington Bridge upon its opening charged a ONE HALF DOLLAR toll to recoup the cost of construction.

In inflation adjusted dollars today that would be LESS THAN NINE DOLLARS!

It is close to double that price at FIFTEEN DOLLARS TODAY.

The power to tax, once conceded, has no limits; it continues until it destroys. - Robert Anson Heinlein

When exactly will the cost of the construction of this and all other bridges and tunnels will their cost be reconciled?!?!?!

Why don't he and his fellow councilmen take pay cuts to help with the funding?

Now, when it comes to the dynastic reign of the Cuomo family enterprise (of all LEGAL corruption, graft and endless greed), the words of John Lennon and Chris Hedges come to mind, because in the end, it's the words themselves that will indict this voracious, openly practicing, cradle-to-grave government henchman, given that the hyper-corrupt court system has now made it abundantly clear that Cuomo, Silver, Skelos and yes, even a hardened turd like Joe Bruno, are ALL 'TOO BIG TO FAIL'——despite how their intense failures continue to rob the pockets of every New York State, hardworking taxpayer with a vengeful impunity, for which everyone else continues to pay a soul-crushing price:

>East River bridges need to be maintained. So do a modest 3.00 toll on them with this new computerized scanning equipment.

A modest $3.00 toll will become a $12 toll in just a few years. Unless we keep the toll at zero, it will endlessly go up, just like all the other tolls, and we can kiss one of the very few affordable things in this overpriced city goodbye.

Keep your dirty corrupt hands out of our pockets Señor Cuomo.

Congest this mofo out of office so he can start selling electric cars.

make the subway fare equal to toll they rob from us to use the MTA bridges - if you take a bus over a bridge you have a "servant" open the door for you & drive you - you use their fuel & vehicle and can be with that MTA vehicle for 10 miles and transfer to a subway for another 15 miles or more - - - - when you drive over in your own vehicle you are using the MTA bridge for 1 mile and charged triple what the bus cost - - - - and the bridge toll "victims" are also paying for free wifi for subway & bus users and any apartment house dweller who faces an elevated station or terminal where buses sit (I don’t get free wifi while sitting in traffic on a bridge)...