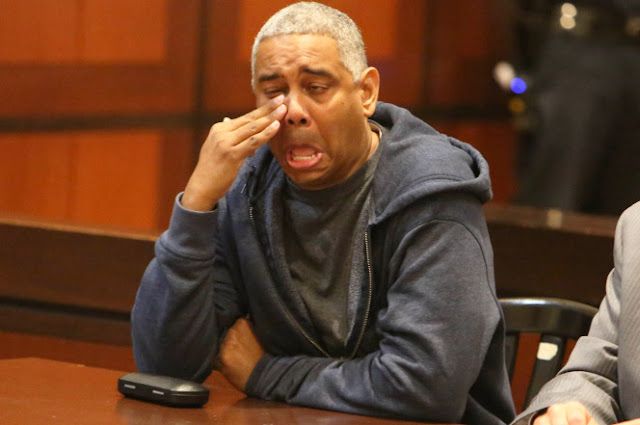 ​Disgraced​ former​ ​Queens city councilman Ruben Wills cried like a baby as he was sentenced to two to six years in prison Thursday for looting public coffers​, pleading for leniency and maintaining his innocence to the end.

Wills, who was stripped of his title at sentencing, was ordered to pay almost $33,000 in res​​titution after a jury found him guilty of pocketing some $30,000 in city funds.

The normally well-heeled politician arrived in court in jogging duds and blue sneakers–and bawled as he begging the judge for leniency, claiming he’d done nothing wrong.

“Do not incarcerate me,” Wills begged. “I maintain my innocence and disagree with the verdict.”

“I did those things to enrich the community,” the typically cocky man said through sobs, at times crying so hard he was unintelligible. “I cannot justify that I did something wrong.”

“In my entire life I’ve never taken anything from anyone,” he blubbered. “My purpose from birth is I am an advocate.”

The still-teary pol then turned to his wife, and apologized for not spending more time with her “because I was out in the streets helping people and praying for people.”

Defense attorney Kevin O’Donnell also asked the judge for mercy, saying “very few people have given more to the community than Ruben Wills.”

“Show him some mercy, some compassion,” the lawyer implored, adding that jail would bankrupt his client and leave him unable to pay restitution. “I’m just asking you, judge, that you do the right thing and let him do community service. Nobody wins by him going to jail.”

“I have no doubt that you have done some good things in the community,” Queens Supreme Court Judge Ira Margulis told the whimpering lawmaker. “However you are convicted for stealing from state and city agencies.”

Margulis then slapped the disgraced pol with a $5,000 fine on top of everything else, and ordered him cuffed.

So there you have it. Now caption that photo!
Posted by Queens Crapper at 5:32 AM

Those crocodile tears taste so delicious.

I'm so sorry
that I got caught.

It wasn't me - it was Joe Moretti.

He'll cry louder as cell mate Bubba's schvanz finds its mark! If you can't do the time, don't do the crime!

They should go after Jose Peralta, and Francisco Moya !!

Boo hoo. I'm so sorry I was caught stealing.

Now, THIS small fish (in a big pond of scum) is NOTHING, Queens Crappers: The big criminal enterprise has been once again diverted by THIS pathetic, low level criminal, whilst mafia wanna be thug, Mario's son (Little Boy Andy Cuomo) continues to lie, cheat and steal with impunity (easier than he breathes!), and so are his Albany henchmen-in-purgatory, including (but not limited to), Sheldon Silver (and STILL no jail time, much less restitution, to ALL NYS taxpayers' for his heinous fraud and crime scams, to the tune of $5 million, and counting, while he works the unconscionable appeal process!), Dean Skelos & Son Adam, and meanwhile, the one who stole the least is serving actual jail time (and right away)!

This is the reason why not a single resident of this godforsaken state trusts ANY level of public authority, when public corruption, graft and endless greed are so openly practiced for which everyone else in the rank and file continue to pay a soul-crushing price.

Hey, Ruben! The lesson here is: When you are finally released from the 'Big House, and then next time when you run for a seat on the Assembly (and you WILL, followed by becoming elected, because the dumber-than-a-bag-of-hammers 'SHEEPLE' always reward their publicly elected criminals with more unearned power and privilege!), and when you steal again from public government coffers——STEAL BIG LIKE ANDY, SHELLY, DEAN & SON——and, you will never see the inside of a jail cell again, just like the untouchable criminal enterprise at the top halls of decaying power in Albany itself!

Boo Hoo. Not sorry I did it -- Sorry I got caught.

If they just paid me more I wouldn't have to steal!!

It is racist to pick on me when EVERYONE does it!!

Joe Crowley believed in me, why can't you your honor WAAAAHHHHHH!

Big Bubba is going to be so happy and nobody is gonna save this guy in jail because he stole and cheated his own people. In prison that's 2nd to worse of being a child molester or rapist killer

And Yes, why is guy getting the book thrown at him when others did far worse and got nothing but a slap on the wrist ?

Anonymous said... "Now, THIS small fish (in a big pond of scum) is NOTHING, Queens Crappers: The big criminal enterprise has been once again diverted by THIS pathetic, low level criminal, ..."

This is called "trickle-down politics". It started in Washington, D.C. and will continue forever and ever.

And SHEEPLE will have no say in the matter since MONEY controlled by political parties, always have the last and first vote.

To M. How and others: Read the new book by Jesse Eisinger entitled, 'The Chickenshit Club,' about how there are two justice systems that are currently employed in the 'UNITED STATES of AMNESIA and ENTERTAINMENT': One for the rich and guilty (like Joe Bruno, Sheldon Silver, Dean Skelos & Son, 'Gargoyle Andy' Cuomo, former Virginia Governor Bob McDonnell), and one for the poor and (practically) innocent.

Face it, Queens peasants, We, The People have owners in America, and it's a long term 'Hijack-and-Hostage'sentence that ONLY a second, bloody American revolution can destroy, because 'NAKED GREED' and OCD are two forms of mental illness for which there IS no cure: