What killed the Flushing Creek fish? 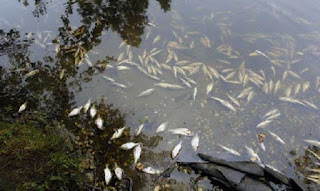 With reports last week of “thousands of dead fish” floating in Flushing Creek, the city’s Department of Environmental Protection (DEP) placed the blame on predatory TK fish, which the agency said chased the defenseless fish into low-oxygen areas where they ultimately died.

But Councilman Peter Koo (D-Flushing) and local environmentalists tell a different story, blaming the deaths of the fish on the polluted conditions in the creek, where the city is currently looking to reduce combined sewage overflows (CSOs). These are instances where, during heavy rainfall, sewage-treatment plants cannot handle the increased load, and a combination of excess rainwater and untreated sewage seeps into local waterways.

On Aug. 11, Koo used the deaths of the fish as evidence that the city should rethink its long-term control plan for Flushing Creek and Flushing Bay—which is the DEP’s plan to reduce CSOs. Alongside environmentalists, Koo argued that the plan’s use of chlorine to disinfect the waters could have a negative impact on the waters’ ecosystems, and that the city should invest in increasing the capacity of the area’s sewage infrastructure.

The DEP also says it sampled the waters the Monday before the fish kill, which occurred on Aug. 9, and found sufficient oxygen to support marine life. Additionally, it says the rain that occurred that Monday was all captured by the $350 million sewer overflow tank. It argues that fish kills like this have happened before, and if the water conditions were at fault, the predatory fish would be dying as well. The DEP is building green infrastructure in the area to capture stormwater before it enters the sewer system.

But marine immunologist James Cervino, who is the chairman of Community Board 7’s environmental committee, said that he analyzed the dead fish and concluded that the fish were killed by polluted waters. He said that had the fish been killed off in a predatory event, there would be “massive lesions and bitemarks.”

“There [are] no bitemarks,” he said. “Some of the fish have been eaten by blue fish and chased, which is a normal process, but a majority of fish that died off were due to a harmful algal bloom.”

What the hell is a TK fish?
Posted by Queens Crapper at 1:54 AM

Have they measured the levels of rancid soy cooking oil in the water?

I got better questions, what made the DEP think that "TK fish" would survive in the water when their prey couldn't survive, and what made the DEP, under de Faustio, think they can fool the public and marine biologists with their crackpot whitewash study.

There is no question that there is a lot of incompetence and negligence behind the infrastructure process of these projects.

So the DEP knows it was predatory fish because their sewer/wastewater plan is working. Peter Koo and environmentalists know it is pollution because the DEP plan is not working. Peter Koo knows the solution is more sewer infrastructure which would coincidentally help developers and marine immunologist James Cervino says it is an algae bloom. Seems like everyone's facts and conclusions line up perfectly with their own plans and desires just like everywhere else

Happens all the time in crowded third world slum. Queens is the only place in NYC that has expanding slums.

Interesting how all the weeklies every year at this time has the Dragon Boat races on their front cover. Now, when was the last time any of you went?

Of course only a city employee for DEP would think this was from predator fish and not a toxic change to the water!

Hundreds of fish going belly up at the same time? Predatory fish? Do predatory fish kill their prey and then do nothing with them, leaving them to float to the surface?

I'm surprised there was still fish in that creek. THOUGHT THEY WERE DEAD A LONG TIME AGO. Save the fish!

Maybe Peter Koo had a desperate need and took a quick dump in the creek.
He is certainly full of enough bullshit to eliminate a species.
So tell me another story about how the Chines-Taiwanese "improved" Flushing.
Look.....you name a town "Flushing" and expect it to smell like a rose?
Let's go back to it's original Dutch name.....Vlissingen!

You should all be more concerned about your crooked stinking CB7, which is full of bobble head flunkies that keep on approving massive development projects. Koo alway approves of them. Developers get him elected with their campaign contributions. Isn't Michael Lee (Flushing Commons builder) one of his friends?
Flushing, as a civilized place to live, is as dead and stinking as those fish.

Bunker and other bait fish often end up in these situations, being pursued by striped bass or at this time of year, bluefish. They school into giant herds for protection (at least for those in the interior). But the predator fish also school and push them into a dead end. I am not an expert, but I've surf fished and kayaked long enough to see these "blitzes" (common term for a feeding frenzy) around the northeast. Kayaking through one is wild! Last year, to my amazement, I saw one of these events from the highway right down at the World's Fair Marina area by CitiField... just yards from the mouth of Mighty Flushing Creek, a place I'd assume to have minimal wildlife. I'd never consider fishing there! But the water boiled with leaping fish. I'm sure the water quality there is far from good on its best day... but a mass of fish will deplete oxygen in any lagoon. It happened in days of yore before rampant pollution, too. So, this is a conceivable answer. But it doesn't mean the water's clean.

What are "TK Fish"? Google turns up nothing.

TK = publishing lingo for "to come". They pushed the article out too early.