School violence may not be down as reported 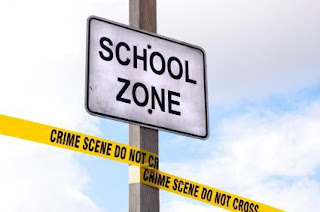 Mayor de Blasio claims city schools are the safest they’ve been in two decades — but not everyone believes the miracle.

Officials said there were a ­total of 503 serious crimes — ­including felony assault and robbery — in city schools last year. That’s down from 532 the previous year and 613 in 2015, according to the NYPD.

But Families for Excellent Schools, a charter-school advocacy group, issued a report Tuesday claiming city officials lowballed serious misconduct in 2015-2016 — and that the latest figures should be viewed skeptically.

That school year, the state recorded roughly 10,000 more school incidents than the NYPD, according to FES. The state’s 2016-2017 figures aren’t yet available for a comparison with the latest NYPD data.

According to FES, the state counted 16,851 overall incidents that year while the NYPD tallied only 6,843. The group said the discrepancy suggests that City Hall is cooking the books.
Posted by Queens Crapper at 3:45 AM

"... and that the latest figures should be viewed skeptically."

ALL information from governments and politicians should be viewed with GREAT SKEPTICISM!!!

From a "charter-school advocacy group." Surely there's no vested interest there.

For Big Bird, there is not statistic the "Backspace" key can't fix. Press the key a couple times and wa-lah...no crime at school. Can't believe that we are going to have 4 more years of this guy.

They absolutely underreport and sweep stuff under the rug. And I'm not surprised at all. If you think violent thuggery isn't a fact of life for NYC students, I've got a bridge. I don't even know how the police can keep up with it. And R185, charter schools are the only hope in some neighborhoods for their kids to be safe. I'm not exaggerating.

75% of statistics are made up

The charter school study is a red flag, but so is the record keeping, tabulating and contemptible obfuscation of the De Faustio adminsistration. Not only in education, but it spans from tabulating crime stats to lead amounts in NYCHA buildings. The corrupt mayor and his drones are cunning motherfuckers.


And while finding this link, there was this doozy from a Bronx high school.

I despise the existence of charter schools, but their findings are credible.

Unfortunately, I had to take the Q22 or Q53 bus to work at the same time children and teenagers were on it going to school.

The crammed bus had screaming and fighting teenagers wearing huge backpacks that took up a lot of space and hurt if one was hit with it during one of the many fights. Some of them would just go off for no reason. Like very disturbed mental patients. I never understood why the bus drivers didn't stop the bus to call the police. That is until one day near the school for those who have been kicked out of other schools or who are suspended. This is a school for troubled teens. Chanel Lewis, the alleged killer Karina Vetrano, graduated from there. He had been forced out of the HS for Medical Professions in Brooklyn in 2011 that he wanted to “stab all the girls.” That same year he “cursed at a female student and threatened both her and her family,” law enforcement sources said.

The bus driver stops the bus and only opened up the back door. Three male staff members rush in and subdue, let's call him Sonny Boy. They were pretty nice to the little scum who had just attacked five or six teenagers standing next to him. They were cosseting Sonny Boy, but one asked him if he wanted to go to blah blah, forget the name, which I think is a mental hospital. Then they merrily all get off the bus twenty minutes later and no one has to call the police or make any record of the regular disturbance. It doesn't go on the criminal statistics.

It wasn't until the news stories about the Howard Beach jogger's murder that I recognized the school as the one with all the emotionally disturbed teenagers. The majority are boys. This is an open secret. Some people, such as those who work at the school, the bus drivers, the so called students and parents know about it. The neighbors don't. And the general public doesn't know that these older teenagers have had consistent negative contact with law enforcement. AND thanks to the idiots who have raised the age of criminality, you may not know this until you or a loved one are one of their victims.

Chanel Lewis, a paranoid schizophrenic, graduated from Martin de Porres School in Rockaway Park, NY in 2016. Is there were he learned to wander in Howard Beach, by taking the Q53 bus to school? I would be that's how he got to school.

On May 17, 2011, administrators at the High School for Medical Professions in Canarsie called police about his statements, sources said.Lewis got into an argument with a female student and later asked the dean of the school, “What happens if I bring a knife to school?" a source said.Police did not arrest Lewis, 20, but documented the incident as involving an emotionally disturbed person. Lewis was taken to Kings County Hospital for evaluation, sources said.

Lewis ultimately graduated from Martin De Porres High School.Lewis repeated his hatred of the opposite sex in a more recent encounter with police, sources said. But the threat again did not warrant an arrest, police determined.

Chanel Lewis's incidents are on the of many teenage incidents that fly under the radar.

It is amazing that this is still one of the hottest sellers in college bookstores: How to Lie with Statistics, by Darrell Huff, 1954