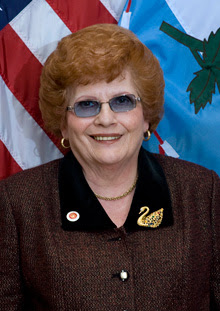 The Forest Hills and Rego Park communities near the 112th Precinct have been in an uproar since it was announced that one of the community’s treasured shopping locations would be moving out of the area to be replaced by an 11-story, 170-unit rental apartment building, depriving the area of a supermarket and adding to the traffic and parking problems that already plague the area.

Former Queens County Deputy Borough President and present NYC Councilwoman for the area, Karen Koslowitz, vowed to stop the egress of the long-time food market located at the corner of Yellowstone and Queens Blvds. Her announcement was made during her participation in National Night Out Against Crime on Tuesday evening, August 1, as she spoke to a group of about 200 community residents who gathered together to recognize and honor the members of local law enforcement whose mission is to keep the community safe.

This I gotta see.
Posted by Queens Crapper at 6:13 AM

Free enterprise and politics don't mix. If a business wants to close, then nothing should interfere with it's decision.

One of the major tenets of the Communist Party is the complete control of the businesses and means of production.

How do you FORCE a business to stay when they do not want to or cannot afford to?

It is no different than forcing you to stay at a job that you hate.

Another fool who missed every economics class her entire life...

Isn't it a Key Food on that Corner and Not Met Food?

Anyone call McDonalds? It seems their clown got lose!

Instead of interfering with progress, she should be organizing volunteers from the neighborhood to help out their elderly neighbors. The Key Food she is trying to save is not worth fighting for. I will enjoy seeing her lying in front of a bulldozer or chained to the doors of the store, though.

How much plastic is there? Is that a person? or something from a wax museum horror show?

It isn't a Whole Foods or Trader Joe's, that's for sure.

I thought that was a Key Food, formerly a Waulbaums. Where is this? In Forest Hills?

I'm sorry, I can't take anyone seriously with that hair and those glasses.

I never would have considered that a treasured shopping location.

How ironic that this cradle-to-grave government, DemonRat, party-machine-failed hack (and resident parasite who, besides cockroaches, could survive nuclear proliferation!), retreated into DEAFENING SILENCE when I went to her office, way back in 2012, and asked why there were no public, Community Board 9 meetings about the unwelcome, and publicly unauthorized eviction of a 16-ton statue like 'Triumph of Civic Virtue' (executed under the cover of darkness on Saturday, December 15, 2012), where this fat, toxic, Communist turd actually HAD political jurisdiction and total control to demand accountability, answers, ethics, integrity and transparency from a derelict Queens Borough Hall that was (and still is), everything BUT——and, THIS IS HER IDEA OF PUBLIC SERVICE?——interfering with capitalism and free enterprise of a local supermarket??

Even more unbelievable is how this openly practicing hustler has to wonder why she is so completely despised with a passion, as she feigns total disbelief!

Only in Queens County does a beloved statue disappear (practically overnight——and, ONLY after decades of willful neglect and decay by all previously derelict administrations!), to a Brooklyn graveyard——and, disappearing with it is all pretense of civic virtue itself that used to triumph over all corruption and vice in Kew Gardens Plaza), and the taxpayers' continue to pay for what they never wanted in the first place (much less was ever asked, where due process should have instantly prevailed by way of open community AND Borough Hall board meetings), and the overburdened taxpayer pays (without consent), for a newly restored picture frame that is missing entirely the work of art itself that was prominently displayed for more than 71 years, and counting.

Finally, to paraphrase documentary filmmaker Roberto LoScalzo, regarding the lies and cover-ups over 'Triumph of Civic Virtue,' it bears repeating how entirely criminal (and mad-and-drunk with power) that THIS Queens Borough Hall IS (and always HAS BEEN), when he wrote in to Queens Crap last year on Thursday, May 5, 2016:

❝As far as what is happening with the Triumph of Civic Virtue statue is concerned, one could never invent a story like this, because it just would not be believable.

City first denied any secret plan to move the colossal statue off of Queens Boulevard. City then implemented its secret plan, and moved statue to a Brooklyn cemetery on the pretext that cemetery would bear certain costs of restoring the statue. Instead, public funds paid to restore the statue—on the premises of the cemetery, where the statue remains now. Meanwhile, City is implementing separate plan to renovate the statue's fountain base at Queens Boulevard, at a cost that is 10 times greater than the cost of restoring the statue, and WITHOUT ever returning the statue to its base once everything is restored!

Would you restore the frame of the Mona Lisa, then put just the frame on display while sending the actual painting somewhere else, and expect the public to believe that's terrific? That's what is happening. The only beneficiary here is Brooklyn's private Green-Wood cemetery, which received a valuable colossal public art statue—still public property—for the cemetery to display as it pleases.

That's why this issue is not over, yet. And, it's a perfect example of why Queens is the laughingstock of art, among all of the City's boroughs.❞

Some years ago, I lived off Metropolitan near the Key Foods there. It left and a CVS took that space. Very aggravating for a few years. We thought that the least the new CVS could do would be keep bread in stock, and milk, and some basics, but no. (Then we got a Trader Joe's nearby, which was great.) But the point is, a place to buy groceries is essential to a neighborhood, obviously!

Let's remember that she is double-dipping: collecting a City pension while receiving a Council member salary. This was posted here a while ago:
http://queenscrap.blogspot.com/2011/07/karens-double-dipper.html

How are you gonna "stop" a private business from willingly closing????

Fear not kiddies, no one will starve to death if this grocery store closes. There is another store about 3 blocks away on Yellowstone Blvd. and another on Queens Blvd. near 71st St. If the market calls for another store I'm sure some enterprising person will fill the void. As far as Bozo Koslowitz is concerned she can't and won't do a thing to stop this store from closing. Just grandstanding for votes that unfortunately she will probably get.

Keep overbuilding and the wonder why the infrastructure and transit system doesn't work......