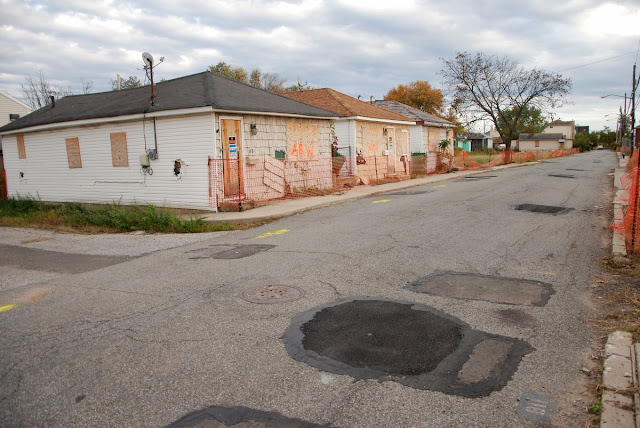 We live in a strange moment, when on the one hand, the state government is paying millions of dollars to help hundreds of residents move away from the water in an orderly fashion, but on the other hand, the city and private developers are encouraging thousands of new residents to move into rapidly constructed waterfront towers that cost billions of dollars. These diametrically opposed plans for the waterfront are creating very different versions of the future, even as the city has begun to initiate its own managed retreat programs in Edgemere and beyond.

Posted by Queens Crapper at 6:53 AM

We should revisit this point time and again:

The Democratic Machine is keeping a stranglehold on Queens, stunting the borough, in essence, making it a separate place from the rest of the city: its values, its vibe, its essence completely subject to the whims of the fascist Democratic Party of Queens machine.

The locals are completely cut off from how the rest of the city is moving ahead. They are completely ground down into having no hope that things can change, and afraid to speak their minds or express an opinion.

Queens is the NYC version of North Korea.

True, but why is Queens always different? Backward?

be·night·ed
bəˈnīdəd/Submit
adjective
1.
in a state of pitiful or contemptible intellectual or moral ignorance, typically owing to a lack of opportunity.
"they saw themselves as bringers of culture to poor benighted peoples"
2.
overtaken by darkness.
"a storm developed and we were forced to wait benighted near the summit"

Look to Queens Boulevard and the village idiot Katz.

I suspect that the ocean will ultimately judge which was the better course of action. And from that judgment, there is no appeal.

"Queens is the NYC version of North Korea."
Yes just ask the people of Northeastern Queens why they put up with the new flight patterns from LGA that bombard their neighborhoods with intolerable Jet noise and unbearable air pollution. They just put up with the shit and have no fight left in them anymore. It's pathetic and heartbreaking to watch what has become of our once great city !

James Oddo is good at preventing overdevelopment despite being a scumbag.

What we have here is a case of development dementia

If there were any real interest in reducing the number of homes in the flood plain the southern Queens areas on the mainland should have had a buy-out option offered on a much larger scale. Howard Beach and Hamilton Beach should be phased out by public acquisition of that land. The peninsula portion of the flood plain should also be phased out by buy-out and redeveloped only for ocean resort use with flood/wind proof buildings that can easily be emptied of people when a storm approaches. A by-product would be that the number of homes subject to plane noise would be reduced. There should be no primary residences allowed south of the Belt Parkway and a large berm constructed to reduce future risk north of the Belt as climate change increases the storm surge/flood plain area.