An upcoming guided tour of Ridgewood‘s new bars and restaurants is raising eyebrows among members of a local tenants organization.

Brooklyn Based, a culture and events blog for Brooklyn residents, is making its way into Ridgewood for the first time this June as they bring their “Immersion Tour” series over the Bushwick border into Queens. Partnering with Brooklyn Brewery, Brooklyn Based is hosting their Total Ridgewood Immersion tour as part of their Immersion Tour series which, for the last seven years, has brought people to explore new neighborhoods and visit some of the area’s bars and restaurants.

While some see the tour as a great way to get people spending money at local Ridgewood establishments, others like the Ridgewood Tenants Union feel the Immersion tour is adding to the ongoing gentrification of the neighborhood and the displacement of long-term residents and business owners.

The Ridgewood Tenants Union — which has been fighting the displacement of Ridgewood residents and the increase of high-rise buildings in the neighborhood — has dubbed the walking tour “The Total Ridgewood Gentrification Tour,” and has a meeting scheduled for the same time as the tour (Saturday, June 3, from noon to 6 p.m.) to campaign against the 17-story “Ridgewood Tower.”

“As a long-time resident of Ridgewood and as someone who sees every day the negative impact that gentrification has on the people of our neighborhood, I find it deplorable that Brooklyn Based and Ridgewood Social have organized this tour,” said Raquel Namuche of the Ridgewood Tenants Union. “This event directly connects to the efforts of real estate companies who are helping to displace families due to the influx of new young residents craving the Brooklyn they may have left behind but within our ‘sleepy, family-oriented’ neighborhood. Just like the real estate companies, Brooklyn Based and Ridgewood Social only care to serve their self-interests. The fact that Ridgewood Social is spinning this event as if it was originally organized with the goal of supporting small and immigrant owned businesses is pathetic — we know this is only a ploy to further their brand and make our neighborhood marketable for their target audience.”

Although Ridgewood Social wrote about the Immersion tour, they had no hand in organizing it, Davis said. Brooklyn Based and Brooklyn Brewery are the only organizers for the event. 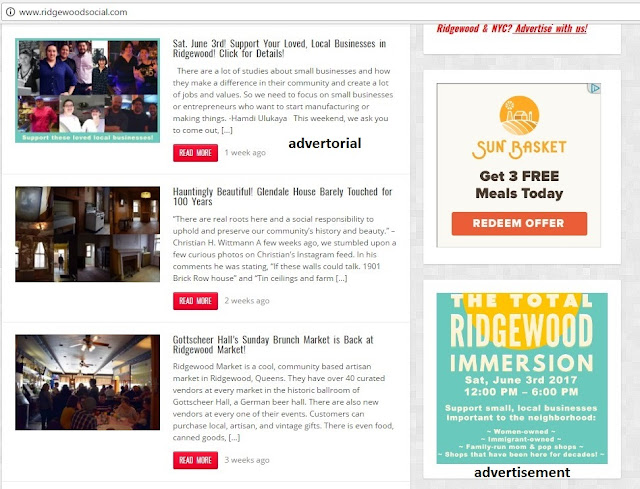 Okay, Ridgewood Social not only wrote about the tour, but they have a huge ad for it on their page. The person behind Ridgewood Social was appointed to Queens Community Board 5 by Liz Crowley, which kind of tells you the direction that the Queens Machine wants to see Ridgewood go in.

We also know what wonders Brooklyn Brewery has brought to Williamsburg.
Posted by Queens Crapper at 6:56 AM

the action of immersing someone or something in a liquid.
"his back was still raw from immersion in the icy Atlantic Ocean"


Total immersion, sounds like a scifi movie plot. I'm thinking of Roddy Piper's classic "They Live", where hideous aliens immersed themselves into society and took over cities and government.

I can't believe they did this 6 other times, I wonder what towns they "immersed" besides Williamsburg as mentioned above.

Why don't they "immerse" themselves in Brownsville or Canarsie. Or even Ozone Park, it's getting vibrant with mental defective drifters roaming up and down Cross Bay Blvd. Why not immerse in Morrisania in the Bronx, shootings happen there every day that even Eric Phillips wouldn't find it winning. Really what are they waiting for, for one of their peers or pals to attempt to open a beer garden by the projects, a cluster building or a homeless hotel?

Check out the stops, these are all places that haven't even been in the area for a few years. All the bars they are crawling too are recent and pretentious. And in the case of Nowadays, on a toxic surface.

It would be nice to know who is funding this vibrant group concern.

This may sound biased, but Brooklyn Brewery is a real shitty beer. And they charge the same as imported beer.

I hope the true Ridgewood citizenry makes their lame crawl miserable and awkward.

Guess the price of coffee and a bagel just went up on Myrtle Ave.

Years ago many considered Ridgewood to be part of Brooklyn because the post office considered it so. It was even issued a Zip Code of 11227 containing a Brooklyn prefix instead of Queens' 113.

Since the gentrification of Bushwick worked so well perhaps the county of Kings is is exercising it's own brand of Manifest Destiny.

Re: part of Brooklyn.

I remember that too, I remember going there as a kid when they had a street bazaar (I think it was there, it was so long ago). Going up the hill through the cemetery and hitting fresh pond road, ending up in Ridgewood, I always thought it was part of Brooklyn too.

These fauxgressive posers have no sense of history for any of the places they immersed themselves in. They have no history at all.

But judging by the hilarious parody of their pub crawl posing as some tour for local cultures, timely given Anthony Bourdain's sudden condescending concern for the borough that he made into a special, the citizens are not taking this bullshit anymore, the jig is up with these farces perpetrated by the Gentrification Industrial Complex. Everybody knows the patterns now.

The price of coffee and a bagel will go up only if you let it.

Nobody is going to make Queens a brand.

The annoying little jerk who is Ridgewood Social is a pathetic carpetbagger with a tendency to whine out of both sides of her mouth. One day, she is advocating for the tenants organization, and the next, she's promoting this sort of event. Pick your battle little girl. Or better yet, just go away. I have lived in my beloved Ridgewood for my entire life and have seem massive changes in the neighborhood--some good, some not. I own my multi family home and have had the same tenants for years. Could I raise my rents and kick them out so hipsters from Brooklyn can come in and pay 3 grand a month for railroad rooms? Sure I could. But instead I raise my rents only when absolutely necessary and as a result, have solid, loyal tenants who treat their apartments like they own them and support the local businesses on a REGULAR BASIS, instead of the hipsters who will shop for the day. Ridgewood has been a vibrant, interesting, thriving place for a long time and doesn't need Ridgewood Social or walking tours to keep it that way.

So who IS This "annoying little jerk" Huh?

I was born in New York in 1967, I am also a long time resident of Ridgewood. I have called Ridgewood home since the only place you could get a "decent" cup of coffee was at 7-11. I have been supporting my local laundromat around the corner from my house which is owned by a Chinese family for 5 years, the laundromat before them was Indian owned, I shop my local bodega owned by Dominican owners, I get my phone fixed not at Verizon but a small wireless store where I also pick up my UPS.

I live in a building that is mixed with young and old. My neighbor has been living there since my now landlord was in diapers, another neighbor for 42 years. I have been in this very same building longer than it takes to get a degree, the last two apartments also in Ridgewood. In the building next door to me there are white creative families that have occupied their space just as long as I have. I have seen their children as newborns grown into teenagers, do you consider them hipsters, am I a hipster?

I am one of the business owners that you are calling out not to support. How many years must a person live in a neighborhood before they are allowed to call it home?