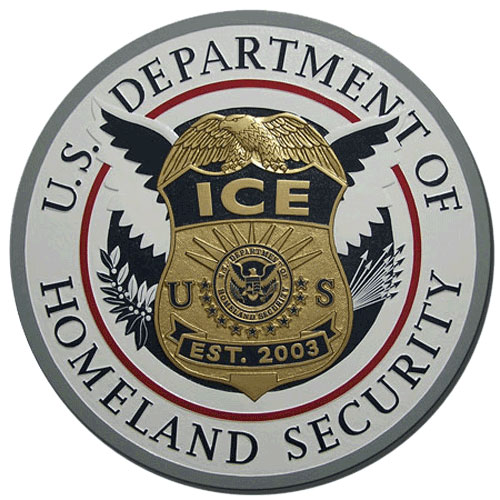 A landlord who’s faced past allegations of tenant harassment has posted signs touting a Department of Homeland Security tip line in some of his Queens buildings, which have unnerved some tenants.

Between President Trump’s push to deport undocumented residents and a spike in immigration raids, the Bangladeshi tenants of a Zara Realty apartment building on 168th St. in Jamaica are on edge.

“It’s to scare the people,” said Abukhar Hossain, whose family has lived at the nine-story brick address for 15 years.

A recent visit showed the DHS placards posted prominently at 168th St. and at another Zara-managed building a block away on 88th Ave.

Tenants at 168th St. said the signs have been up since Zara arrived in 2014. Tenants at 88th Ave. didn’t know when they first went up.

Hossain said he couldn’t say whether the signs at 168th St. resulted in DHS activity, but noted that at least one undocumented family was among several tenants who’ve moved out since Zara Realty took over.
Posted by Queens Crapper at 6:48 AM

If you have paper trouble and a landlord does this on Staten Island and you call James Oddo's office for help, his staff will call ICE on you.

The landlord should call ice if they suspect illegals are in their buildings. This is why rents are so high in this city. If we get all the illegals out we can put actual citizens in these apartments.

We have to stop catering to people here illegally.

After fumigation from food odors that apartment could go to an American citizen.

You tell those hipster kids that if the illegals are deported, rents will go down and there will be more options, and they can finally get an apartment, you will see how much support the Democratic Machine will have then!

Why would a sign worry you if you were legally here?

Does they not have the right to hang a sign?

The potentially illegal tenant has all of the rights, can't be evicted, can't be forced to pay rent, etc. The owner can't even hang a sign?

Daily Snooze looking to evoke sympathy. They have come to the wrong well.

The same people quoted in the article would speak up against illegals soon enough if their rent went up because multiple illegal families were in arrears, so their phony outrage at the signs is ridiculous.

No one in this country has any status unless they are being discrimiated against or offended.

The post office has wanted posters in the lobby! That makes me uncomfortable. TAKE THEM DOWN!!! NOW!!!!

The Daily News is a rag. They are trying to make people feel bad for the illegals, but I think most people would like to see the law followed.

GOOD. This is the way it should be. CLEAN HOUSE.

I mean look at that fucking third world mess apartment complete with a bedpan on the floor. How would you like those slobs next to you and imagine how many are crammed in their.

As a person whose family came to this country legally and through the proper channels, FUCK all you who came here illegally. I have no sympathy or empathy for any of them.

In the article below:

Hossain shows how bad the conditions are in his apartment — his family is plagued by rats, roaches, bedbugs, and water leakage problems.

OH REALLY, you don’ think that fucking slob bedroom complete with bedpan on the floor is not bringing in roaches, bedbugs and other vermin. JESUS FUCKING MOHAMMED, clean your fucking apartment. I mean who would want to live near these fucking slobs.

GOOD for Zara Realty and I am glad they have taken over many apartment buildings in Jamaica. At least Zara Realty makes sure their apartment building are always clean on the outside and maintain their buildings as opposed to the many slumlords in the area who don’t. PLUS, Zara does not tolerate any nonsense in their buildings or the outside. You will not see litter on the outside of their buildings, people just loitering, selling drugs or making noise and playing loud music or letting their fucking little rug rats make all kind of noise and do whatever they want in front of the building.

We need more landlords like this, not the crap landlords who don’t give a shit.

Now let’s hear our local asshole elected official chime in on this, yet not one will stand up for the underage 15 year old girl who was pimped out by some hood rat in Rev. Floyd Flake’s Greater Allen Cathedral Senior Residence for four months (https://cleanupjamaicaqueens.wordpress.com/2017/06/12/11-days-the-flakes-and-greater-allen-church-have-made-no-comment-about-underage-girl-being-pimped-out-of-greater-allen-cathedral-senior-residence-for-four-months-plus-some-new-info-arises/).

JM is correct!
The article states that they are complaining about rodents, why don't that clean that shithole apartment up.

I find it unlikely the landlord / management company is doing this because of their need to keep illegal immigrants out of their rentals. They could easily figure out which tenants are illegal before they even moved in.

They are most likely doing this so they can pressure tenants to move out if they want to charge more for rent, keep security deposits using this veiled threat, raise rents and/or not fix things and use this veiled threat to keep the tenants from reporting them.

This is America. If I worked hard, saved and bought an apartment building, I feel I could post any kind of sign I wanted on my property. The city is overcrowded with Illegals, who get everything for free. That's why they come here. Get rid of them if they don't belong here and watch the housing industry open up. It might be nice if he city could help senior citizens, who worked hard all their lives who are being displaced and forced to move out of their houses and apartments.

Actually just as a matter of fact, Bangladeshis do come here LEGALLY!!!

Constitution of United States of America 1789
First Amendment (ratified December 15, 1791):
Congress shall make no law respecting an establishment of religion, or prohibiting the free exercise thereof; OR ABRIDGING THE FREEDOM OF SPEECH, or of the press; or the right of the people peaceably to assemble, and to petition the Government for a redress of grievances.
The signs providing the Department of Homeland Security tip line is neither false nor slanderous!

However the Supreme Court did rule in the 1919 decision regarding the case of Schenck v. United States. There are limits to free speech, as an example, falsely shouting "fire" in a crowded theater!
The Court ruled unanimously that the First Amendment, though it protects freedom of expression, does not protect dangerous speech.

The "ICE" signs in the dwelling could easily cause a stampede of the tenants, worse than an actual fire in a very crowded theater, that by some may be deemed "hugely dangerous"...

How about a sign that says, "Women who don't pay rent will be raped"?

Maybe you should rethink your statement.

>> Anonymous Anonymous said...
>> If I worked hard, saved and bought an apartment building, I feel I could post any kind of sign I wanted on my property.

Schenck v. United States was decided on the basis of attempting to obstruct the draft, and it's debatable that after the federal tolerance of dissent during the war in Vietnam and in Iraq that the ruling would even stand today. The court's bar for abridging speech in the U.S. is extremely high.

What is likely going on: Landlord wants to drive out those ineligible for housing subsidies in favor of those who would qualify. That way it can inflate rents above what that area would normally see.

That area ain't going to 'gentrify' to even Astoria prices any time soon.

The landlords are typical hypocrite-bullshit leeches. They wail about what is left of rent regulations in good areas...but squeal like stuck pigs when any talk of cutting back the subsidies that keep rents inflated in poor districts.

There is nothing wrong with the signs. What is so very wrong is that our tax dollars and energy is going to protect illegal aliens when they should all be shipped home. Clean up Jamaica. Get rid of the Bengali Al Queada supporters and American haters

"How about a sign that says, "Women who don't pay rent will be raped"?"... Absurd comparison, rape is a crime, reporting criminals is a civic duty.

Ship them home? They came here legally!!! Isn't that what Our president has been advocating - legal immigration !!! Most of the Bangladeshis are very hard workers in the food service industry. They take jobs that you or your kids will never want to work. They enjoy living in America and are more patriotic to this country than you. No one should be harassed period!!!!!

No it's not an absurd comparison . The other poster said they should be able to post "any" sign they want . The point was being made that there should be a limit on what signs are posting .
Btw, don't be fooled by the landlord . This isn't done out of their concern for illegal immigration . This is being to force tenant they don't want out without fear of being taken to court .

The landlord threatens illegals to lower the rent? LOL