Don't open hydrants without a cap 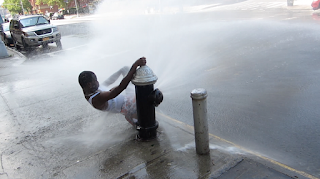 The Department of Environmental Protection (DEP) has launched its 21st annual crackdown on city residents who insist on opening fire hydrants without an approved “shower cap.”

DEP officials are sending teams of teens into local neighborhoods to educate New Yorkers about the dangers of illegally opening fire hydrants.

Illegally opened hydrants can release more than 1,000 gallons of water per minute, reducing water pressure and making it difficult for firefighters to battle fires, in addition to lowering water pressure to neighboring homes and buildings, DEP officials said.

Queens residents are urged to report illegally opened hydrants by calling 311 immediately, DEP officials said. Illegally opening a fire hydrant can result in a fine of $1,000, 30 days behind bars, or both, a law enforcement source said.
Posted by Queens Crapper at 6:46 AM

Interesting timing with the temps reaching the 90's over the weekend with brutal humidity.

Good luck getting the african american and puerto rican communities who rely on this summer tradition to rat on their neighbors.

https://www.youtube.com/watch?v=EAM97wVdmmM
(check out legendary Frank Vincent at the end)

Yes, they shouldn't do that to the johnny pumps (there's a term long unused), because of said damage, you never know if the scumlords will go back to resorting to arson to get rid of poor and middle class tenants again. (Hint, hint, recent fire in Elmhurst)

How do we limit the unchecked flow of money from developers to Paul Vallone?

"Queens residents are urged to report illegally opened hydrants by calling 311 immediately, DEP officials said.."
If we call 311, how long will it take DEP to come and check the open hydrant?

Sprinkler caps have along history in NYC - back to when it wasn't the African American and Puerto Rican (or Mexican) communities, but rather Jewish and Italian kids looking to beat the heat. Need to get the word out: ask at your local firehouse to have a hydrant opened and fitted with a spray cap for recreational use. You must be over 18, show ID, and fill out a form. The firehouse will schedule a time to turn the hydrant on and off.

All summer long last year we called 311 about fire hydrants being open illegally or we used the 311 app to log a call. Two days later a call is still open after getting a note primarily stating that the call was being sent to Office of environmental protection for further handling. By then the damn hydrants are closed and when They finally come there is nothing for them to find! And to the first poster; this IS an African-American Hispanic neighborhood, we have a block Association and we work closely with law-enforcement and community leaders to keep our neighborhood in line. so believe it or not we actually do report anyone who is breaking the law no matter who we are and no matter who they are. Not all Hispanics and African-Americans are bad and don't care about their neighborhood. We DO care and we try as hard as we can but the city needs to really crack down on these people more and find faster ways to solve issues for the benefit of all NYC citizens. This is where the city of New York fails us!

How about educating our ever oppressed-and-languising taxpayers' on the fragrant, OPENLY practiced abuses of all crooked-and-corrupt politicians (not public servants), all of whom have enriched themselves for a life of PRIVATE SPLENDOR, versus the daily PUBLIC SQUALOR, adversity, beggary, obscurity, quiet desperationa and human misery that they themselves have created that didn't previously exist?

To the DEP and politicians I say: F**K YOU, LAZY and ARROGANT ASSHOLES! To We, The People I say: Open up ALL of the hydrants this weekend, whilst covering your faces like the REAL political criminals, thugs and SCOURGES——and then when the entire city is flooded and no one has any water (much less water pressure), then maybe, JUST MAYBE there will be taxation WITH representation again. And, MAYBE my OWN thug-representatives will make an appointment to see me, answer their telephones and start to finally work for a living (ever), because THIS is what it takes, fellow Queens and NYC peasants——civil disobedience and REVOLUTION——a drastic and unified act of defiance and recalcitrance, EXACTLY like ALL of NYC'S defiant and hardly working politicians have flagrantly abused their power whilst engaging in a WILLFUL derelection fo public duty, for which ever crippled taxpayer continues to pay a soul-crushing price!

City and State government represents have ravaged our lives, robbed our youth and stolen our jobs and livelihoods with a vengeful impunity that is unprecedented, to date! Let's get back at these lethally dangerous public fools and flood the entire F**KING city until its under water.

Sadly, even organized crime family rings worldwide have never had the kind of insidious heft and unregulated power and privilege that all kleptocratic politicians now wield today. And, if our citizenry don't get with the program and start punching back TWICE AS HARD, then the systemic abuse and freedom destruction of our rights, liberty and nearly abrogated democracy will ONLY start getting worse by the hour (like right now)!

Finally, it's ALWAYS better to reign in hell than to serve in heaven! Let the battle and REVOLUTION begin!

Sprinkler caps have along history in NYC - back to when it wasn't the African American and Puerto Rican (or Mexican) communities, but rather Jewish and Italian kids looking to beat the heat.

That's also true, back in the day in East New York later in Ozone Park and Howard Beach.

One day riding on a sweltering hot day through Williamsburg I was riding by a soaked street with kids going nuts under the spray shooting out. They were nice enough to cover it so I can pass but I took off my bag and cd player and told them to let it go and just got blasted with water. Everyone was laughing and actually reveling.

This happened 20 years ago, and it may be the last glorious and enjoyable moment I have or ever will have in this city that is now sterilized.

Apologies to the last anon, apologies for making generalities. Despite the way it's conveyed, I wasn't saying that blacks and hispanics don't snitch to protect and enable criminals, but just having a little fun and getting refreshed on a blazing hot day.

That's why I mentioned that they shouldn't do it because of the problems it will cause to the FDNY.