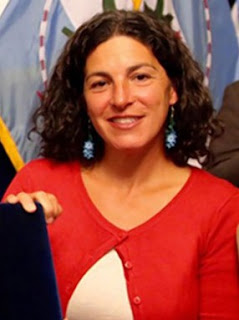 Jackson Heights resident Cristina Furlong, the co-founder of Make Queens Safer, will file the paperwork and start on petitions this week for the Democratic primary,

“After the presidential election in November showed how quickly a change of leadership could change our quality of life in the neighborhoods of the 21st District, suddenly everyone had to identify a certain way and the world suddenly got a lot angrier,” Furlong said. “District 21 is unique, even to New York City. We need smart growth of our small economies and honest and independent oversight of the major projects like Willets Point, Flushing Meadows Corona Park and LaGuardia Airport.”
Posted by Queens Crapper at 6:25 AM

This is just what is needed, a true advocate for outlawing cars and trucks, making the City of New York one giant maze of bicycle paths...

This woman is a flaming liberal who l I ves Vision Zero, but you know what? She ag least has the guts and commitment to run against the old corrupt cronies, which means she is doing more good for Queens than all of us QueensCrappers combined. Go Christina!

Now all she needs is money, signatures and a good elections lawyer.

not another streetsblog asshole

You go, grrl! Let us know how we can help!

Never heard of her, but at least it's an attempt to get rid of the same old recycled hacks that run for office year after year. New people = New ideas.

I don't care if they put up a two toed sloth, anything to throw at the pols is a vote from me - at least until people get sick enough to finally do something - which might be a long time the more I interact with snowflakes.

district 21 can be ground zero for full scale implementation of the U.N. agenda 21

Any info about this group? We don't need another authoritarian busybody in the Council any more than we need more career politicians.

Another "WINNER",a flaming liberal, just violated the" ESPIONAGE ACT".The same one that HRC was exonerated for by former FBI Dir.Stay tuned for JUSTICE. WWII spies were executed .See:Ethel /Julius Rosenberg .

Stop birthing your own monsters, 'SHEEPLE!' No one in the running has any regard for the needs of the ever languishing constituent. It's all about the defined city pension, obscene salary and recent pay bump (that wasn't publicly authorized!), and PRIVATE SPLENDOR for them, versus PUBLIC SQUALOR, adversity, beggary, obscurity and quiet desperation for everyone else!

You've been to this rodeo before, city suckers!

Anonymous said...
Never heard of her, but at least it's an attempt to get rid of the same old recycled hacks that run for office year after year. New people = New ideas.

same socialist communist agenda
same old ideas with some lipstick on the pig
but will she get the blessing from uncle joe Crowley?

To last Anonymous: The candidates may be new, but it's the same old, party-machine-failed duopoly behind a collapsing system that has somehow managed to be relevant AFTER Babylon ended more than 5,000 years ago.

That's why I do not blow the whistle, do not report anything ('If You See Something, Say Something'), until the whole, crooked-and-corrupt system finally collapses from the crushing weight of its own top heavy corruption, graft and endless greed. Once Mario's equally crooked son is behind bars, and joining his crookedness Bill de Blasio, then maybe there can be a system of taxation WITH representation again. As for right now, We, The People have been herded into a perpetual loop of 'Hijack, Overtax, and Held In A Hostage Holding Pattern' that so completely betrays all pretense of public trust, ethics, integrity, accountability and transparency——that the entire system of OPENLY PRACTICED, government tyranny now DEVALUES all honesty itself!

That's why I have stopped voting, and now I don't even have to pay taxes anymore, as I am collecting full disability benefits, and living back in New York State on property that is owned by my protecting relatives, because they know how totally rigged the kleptocractic plutocracy IS (and always HAS been)!

Nothing to see here, peasants. It's A sad : SAME CIRCUS——DIFFERENT UNFUNNY-and-DANGEROUS CLOWNS!

Until all corruption is banished from the breeding point (the top henchmen of Albany and City Hall), then nothing will ever change.

That's why nothing ever changes——because, NOTHING EVER CHANGES!