Do we really need an ambassador of nightlife? 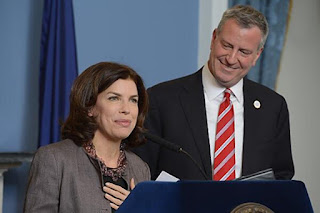 Mayor de Blasio wants to hire a “nightlife ambassador” as part of the jobs plan he announced Thursday, to serve as a liaison between city government and local music spots and clubs.

“We want to have an office that’s really going to work with the various music venues, with the nightclubs, with bars and restaurants and also take into account the community perspective,” Julie Menin, commissioner of the Mayor’s Office of Media and Entertainment, said.

The idea for the new gig comes from the “night mayor” concept used in London and Amsterdam — “only the coolest,” de Blasio noted in listing the cities.

Earlier this year, Menin’s office put out a study that found jobs and wages in the city’s music industry were growing faster than the city average.

“This is an area of tremendous growth for New York,” she said.

But for the live music fans who have mourned the loss of small music venues — especially “DIY” or do-it-yourself venues sometimes hit with city fines — it may feel more like the industry is shrinking. According to Economic Development Corporation President James Patchett, that’s not just hipster nostalgia talking: Another study from Menin’s office had found a 20% decline in smaller music venues over the last 15 years.

But whoever takes on the job won’t just be cheerleading for Baby’s All Right and The Bell House — they’ll also have to balance community concerns about things like noise, Menin said.
Posted by Queens Crapper at 10:31 AM

Just more reason to make people want to leave New York. Isn't it noisy enough as it is without help from the government office ?!

How about an ambassador to quality of life??

This guy cant win another term. Please vote him out!!

He can waste tax payers money

This is a shill to create another branch of "The Mayors" office for more control like the the closed door deals with the media, film and television = Special favors in exchange for guaranteed permits.
To have a concert or do anything promoter will have to go through crooks like AEG or Live Nation and other on the Mayors office list including the catering and vending.
--Its racketeering and monopoly

This bastard Marxist get more despicable by the day

Never before has there been such entrenched levels of corruption, graft, endless greed and cronyism/nepotism in THIS ravaged-and-tonsured City Hall of epic, humanitarian fail!

Once again, all fed up, disgusted and overtaxed New York City residents: IMPEACHMENT is NOT a LEGAL proceeding, it's a POLITICAL one for which the articles of impeachment can be drawn and SO ORDERED at any time of the night or day.

Just another position so mayor dumbdumb can put Another one of his friends into office. What a waste of taxpayer dollars... Smh

Which Crony of the Mayors wife will get this Gem of a Job?

Entertainment, music, and nightlife are important to NYSs businesses, quality of life and tourism. Addressing community issues while supporting its growth makes sense. It's too big a part of our economy to ignore.

Sao why did the NYPD just scrap noise complaints from its list of QOL complaints ?

Why not add a superfluous and stupid position to represent the only demographic the city, New Fun City, truly gives a shit about, and that's the frivolous spending hipshits. The city didn't furiously rubber stamp all those liquor permits and decriminalized public peeing for nothing

Again, this stupid fucking real mayor priorities for the city he incompetently governs are for the well-to-do and asshole intruder celebrities and trust fund babies that bailed on the West Coast and Middle America and have made this city and selected parts of Western Queens and Brooklyn home and impossible to afford.

Will this night mayor also represent those who throw house parties with stadium speakers and massive catering tents in their backyards?

I did a little mining about the office this stupid douchehag has a position in and when it was instituted in the 60's at least there was true and quality culture at the time, as the best movies of all time were filmed in the 60's, 70's, 80's and mid 90's and the two most essential music genres came out as a result, punk and disco, modern art and photography thrived, and of course there was the show Law and Order. But what the city is trying to pander to now, this current malaise passing for culture, is downright terrible and doesn't warrant any tax payer funded chaperoning.

Ultimately, with this bullshit proposal, our corrupt mayor and that entitled slag next to him, validates the fact that the tale of two cities continues stronger than ever. Because with 2 cities, you're gonna need another mayor.

The ambassador of alcoholism.

"Another study from Menin’s office had found a 20% decline in smaller music venues over the last 15 years."
How much did it cost taxpayers to generate this useless statistic?

Keep a bottle of 70% water 30% bleach to kill the stench from people pissing in front of your residence.

Because with 2 cities, you're gonna need another mayor.

This exercise is outreach to the hipshit snowflakes that are systematically destroying communities with their 'Fraternity Row' mindset and our nation their fascist liberal ideology.

The expansion of the City workforce is out of control! I don't want to pay their salaries with my tax dollars. NY state and city taxes already DOUBLE my tax bill.

Of course we do.
Only hire a seasoned whore to guide you to the right "gentle men's" clubs.
"Massagee, massagee, massagee".
You really do not need one for Flushing.
Everybody already knows where to get a "happy ending".

Maybe the mayor will push the the Council to repeal or improve the idiotic Caberet law that's been strangling city nightlife and small venues for ages. Especially since Giuliani time, city nightlife has been on a steady decline.

I doubt it, though. Mayor Zero Vision is too addicted to fines and fees to actually fix things like this.

I want to be ambassador of day life