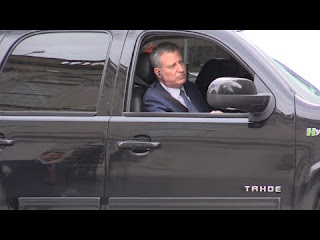 Mayor Bill de Blasio said his regular 12-mile trek from Gracie Mansion to his Park Slope gym is a reminder of his roots as he brushed off criticism Friday over his gas-guzzling routine.

De Blasio, who hails from Cambridge, Mass., and bought his home on 11th Street in 2003, said his trips to the Y on Ninth Street help him stay connected to where "I came from," he said.

His comments, made during his weekly call in to "The Brian Lehrer Show," came amid a barrage of bad press about his near-daily SUV trips from the Upper East Side to the Park Slope YMCA to exercise.
Posted by Queens Crapper at 5:10 AM

For a guy who has been assailing Trump, he sure similarly likes to make outlandish comments to distract people and the press from his egregious behavior, incompetence and his expensive and stupid policy and budget decisions

Good take down by the op ed in the NYPost today.

I was perusing through the Old Oxford English Dictionary the other day in an effort to improve the quality of my postings and stature of this fine Blog, when what to my wondering eyes should appear, but a photograph of Warren Wilhelm de Blasio.

The caption below the photograph read "Limousine Liberal"...

I haven't heard the phrase "Limousine Liberal" in a long time but it surely fits the current boy mayor.

It is the appalling sense of entitlement that is just so outrageous.

It is his RIGHT to use government vehicles to go anywhere he wants.

It is his RIGHT to spend taxpayer money on illegals.

It is his RIGHT to change deed specifications in exchange for donations.

He's an empowered idiot of epic, humanitarian fail, and waste of skin depleting the Earth of precious oxygen who devalues honesty itself!

Alas, if there was any justice and democracy left in this totally crooked world of political raw sewage, then this shithead wouldn't be seeing the world through any prism at all——and living it in prison, namely Riker's Island——INSTEAD!

Thanks for nothing, Preet Bharara! And, since you never climbed out of Chuck Schumer's crusty butt (another massive shithead of epic fail), I'm so glad Trump fired your weak, sycophantic and disloyal ass——because, you never had any real power and heft in the first place!

Frankly, I would vote for ANYONE but an intensely and dangerously incompetent SCOURGE like dumb Blasio——IF ONLY to prevent him from serving a second term——and, NEWSFLASH: It's STILL not too late to draw up the articles of impeachment for this clueless kleptocrat's FIRST TERM!

Remember: IMPEACHMENT IS NOT A LEGAL PROCESS——it's a POLITICAL PROCESS, and it can be SO ORDERED ANYTIME and WITHOUT FURTHER DELAY (EMPHASIS ADDED)!

❝We hang the petty thieves and elect the great ones to public office.❞ —Aesop
❝Those who can make you believe absurdities can make you commit atrocities.❞ —Voltaire
❝It's dangerous to be right when government is wrong.❞ —Voltaire
❝To learn who rules over you, simply find out who you are not allowed to criticize.❞ —Voltaire

Whenever I see a picture of our Mayor Putz, the word that immediately pops into my mind is a*****e.