Giving a leg up to local wildlife 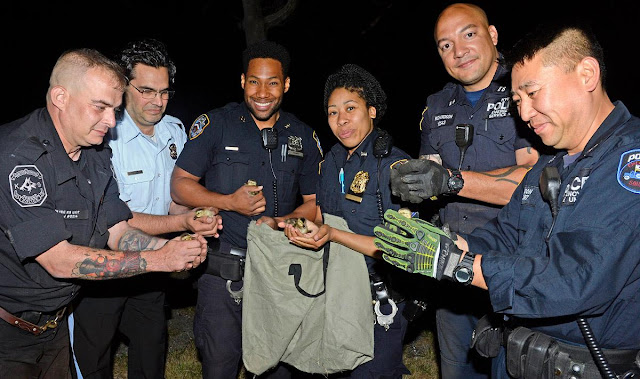 Ten ducklings that were trapped in a storm drain at a Howard Beach park caught a lucky break when they were rescued by officers of the U.S. Park Police and the NYPD.

On Thursday, June 15, U.S. Park Police Officers Cobaj and McGarry were patrolling in the park when a park visitor flagged them down and told them about some ducks that were stuck in a storm drain, which was located near the North Channel Bridge.

Officer McGarry climbed down into the storm drain and was able to retrieve nine of the ten ducklings. The tenth duckling wandered further down the storm drain, but would later be coaxed out by 100th Precinct Sergeant Quwella Brown.

All of the ducks are said to be healthy and will most likely survive the experience. The ducks will be cared for by National Park Service Biologist Bill Parker until they are old enough to return to the park.
Posted by Queens Crapper at 8:42 AM

Really, it's one of the only pleasant sights rarely seen in the "world's Borough"

And this super spectacular incredible rescue cost "We the People" how much of our hard earned dollars???

So, what are you worried about, JQ and (sarc)? The 'Dope From Park Slope' already took care of the bill, when he approved a 38% raise to all city council members, and since none of them can take credit for actual work (outside of their stressful, daily lunch-and-a-manicure dupe), then surely one of the city council derelicts from Ozone Park/Howard Beach political machine will take full credit for the ACTUAL work of the Park Police and NYPD, in lieu of helping ever languishing constituents like me!

Case in point: My curb was damaged by DOT workers when my entire block was paved, back in October, 2007 (yes, you heard it right, peasants——2007)! Despite repeated calls to my arrogant, recalcitrant and politically ambitious council-boy, Eric Ulrich (Derelict Dullrich!), Assemblyman Michael Miller (a circus elephant who needs to be shot), and State Senator Joe Addabbo (a fat, feckless turd that refuses to flush with the REST of the toxic, raw sewage), and nothing has been fixed since nearly ten years ago——including repeated calls to Community Board 10, where one of their lackeys keeps telling me that the City has no contract to repair curbs (like that ABSOLVES them!).

But, what a cute story that the duck rescue makes (which should be automatic by anyone to help wildlife), versus the REAL work, like my broken and dangerous curb, which doesn't look like it will EVER be fixed by the City workers who broke it——and, CERTAINLY NOT before the end of my natural life span! This is what TAXATION WITHOUT REPRESENTATION LOOKS LIKE, now bordering on openly practicing government tyranny and anarchy, altogether!

Get out of this raw sewage dump of Queens County whilst you can, all human life forms——it's ALREADY the end of all humanism as we know it (as evidenced by the willful dereliction of public duty by all council crud and all intensely incompetent City Hall sycophants of epid fail!

About time the cops did something about the juvenile trespassers in the park!

oh, look the affirmative action parks police did something besides harass smokers near the beach. They do nothing about the slobs selling alcohol laced fruit punch on the beach. Oh neither do the cops.