Astoria Park getting an upgrade 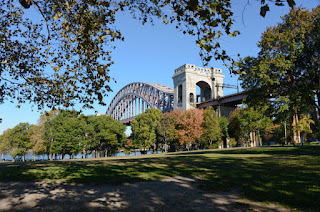 Each will get $30 million to add and improve amenities like soccer fields, comfort stations, running tracks, and hiking trails.

City officials said the parks were chosen based on historical underinvestment, high surrounding population, and potential for development.

Okay, but Astoria Park has had millions poured into it over the years and how much more can it be developed?
Posted by Queens Crapper at 12:38 AM

I wish they would deaden the sound of the traffic on the overarching Triborough Bridge. What a racket!

$30 million for one f***ing park?! Jimmy is rolling in the dough. What about the rest of Queens that really needs it?

Forest 'dark' park needs more lights, and repaved roads and sidewalks. And a lot trees are dying there too, last time I rode there, there were huge broken branches strewn about the curvy roads. One day, a biker or runner is going to get killed from above.

I guess the mayor hasn't been to Melinda's beloved flushing meadows. Hopefully, maybe that kanye west parking lot concert will make some sort of contribution.

This is a total scam. Take a close look at these "underfunded parks in poor neighborhoods..." Fresh Kills? A forever project; Lacks public trans access.

Parks money for "less advantaged communities", what the hell does that mean?

newfound money in the budget?
couldn't waste more on homeless?

Money going to Astoria Park to provide amenities for the waterfront projects that will never get built and the Vallone Family Entertainment Center that will.

How about Cunningham Park? You have a high school cross country course that the Queen's kids run on that is an embarrassment. The Bronx get a world class course in Van Cortland park and Queens gets a weed lined rocky path. And while you're at it, how about putting in a running track. It would look much better than those piles of dirt and debris that take up half the park.

I bet these improvements could be made for not so much money.

For what, and for whom?
This is just to buy votes from the local residents.

Is any money going to the lame Vallone diving pool project? Note that it is currently a fenced in, weed overgrown hole with stagnant water. What a community addition!