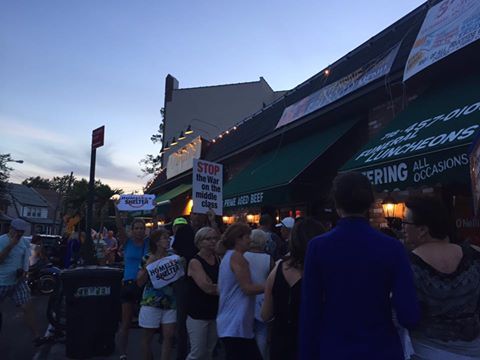 This gets more and more interesting. Apparently as protesters continued their nightly vigil outside the hotel, one night before the public meeting about the shelter, Maspeth's electeds and members of CB5 decided to hold a secret meeting at O'Neill's Restaurant (no one would ever see them there) with Acacia Network in order to discuss the security plan for the shelter they are supposedly fighting. We're still 30 days away from the opening of the shelter and these people have already thrown in the towel by meeting to discuss the security plan.

The only problem is that when you have a secret meeting in a place half the town visits regularly, you are bound to get caught. That's exactly what happened. The police notified the electeds that the protesters were storming up to the restaurant and they ran away just before they got up there.

Stupid is as stupid does.
Posted by Queens Crapper at 6:54 AM

Why the police would have said anything to warn them? It would have been a glorious gotcha moment for all to see.

Well, they're not going to appear in public to fuck the public. They might find themselves in the midst of a rotten tomato barrage or worse.

Hmm....secret government proceedings.
Why are we not surprised?
Queens runs its business's like an old Soviet satellite.
Gotta get some old KBG agent to hack these hacks e-mails.

The days of stealth meetings are clearly over. These hack officials and poverty profiteers have nowhere to run anymore. This is what happens when you arrogantly run programs and obfuscate this way at the expense of the public's right to know and right to live without fear of crime, blight and displacement.

How many secret meetings does CB7 hold with developers?
What does Chuck Apelian gain from these?

CB7 secret meetings? LOL!
I just pissed all over my expensive Air Jordan's!
I'd better quickly rinse them off in the Flushing Creek.

Any evidence that this happened? Photos, video of them inside? Who was there? Are they really this stupid?

Not sure if there were others, but the meeting broke up when 3 protesters barged in and then the rest of the protest made it down there some time later. LoCascio and the captain were still there when the protest got there. Sanchez was at his house around the corner taking out his trash and laughing that they broke the meeting up before they got there. Marge Markey smartly wanted nothing to do with it.

And the bastards complain about 'anon' comments on Crappie.

Guys, you need to strike while the iron is hot and call for a boro wide civic that has nothing to do with pols or pol wanna-bes. You have the internet and your freedom.

But it will be done sooner or later. so why not now?

Why did these clowns have a 'secret' meeting a few blocks from the Protest site? Did they want to get caught? Something stinks.

Why did they have a secret meeting at a public library? These aren't the sharpest tools in the drawer.

"The only problem is that when you have a secret meeting in a place half the town visits regularly, you are bound to get caught."

My take on this is this:

Get Marcia Kramer on their ass...

How would that even work?

Wow, so secret meetings on security plans. Amazing!! Well the beloved Maurice Park as I still call it and all the other small parks the city created will be filled with these people. Let's see how fast the 104 pct responds to calls and complaints.

A borough wide civic association united in one cause?
You gotta be kidding.
Already have one....an anemic Queens Civic Congress.
WTF have they accomplished? Precious little!
Just being the laughing stock of city hall.
A citizens ONLY POWER is at the polling place.
Learn to recognized rapacious pols from those who would truly represent you.
Change them often like soiled underpants, or else wind up with shit in your britches.

You folks keep on complaining but keep on re-electing political pond scum like Liz Crowley!
Take your medicine, now, or change your voting practices.
If Maspeth has become NYC's chamber pot, then it is you who are to blame.
Nobody counts people in a street demo. Politicians only count votes!

> a boro wide civic How would that even work?

Start with UCC and build from there.

I find it disturbing that not only are these meetings secret and kept from the public, but that a high ranking police official is present.

What happened to those 3 protesters who crashed their little party? Did they get locked up? Not for nothing, but if this happened in minority neighborhoods those folks would be physically removed and have the plasiticuffs cinching their wrists

Speaking of which, a community board in bed-stuy gathered in a meeting against a new homeless shelter opening in their town. According to Gothamist, someone allegedly uttered that they should put it in Maspeth (I wrote allegedly because of the website). Mayor Big Pussy and his patsy Banks are playing a warped game of divide and conquer with the homeless and citizens here.

Why don't they stand up to the predator developers and those motherfuckers at REBNY and demand real and not a measly portion of affordable housing be built.

UCC? Did you mean United Civic Congress?
They haven't been called that in decades.
Their new name is QUEENS CIVIC CONGRESS,
and they have had PLENTY OF TIME to make a difference.
So...WHERE IS IT?

It is EXTREMELY difficult to UNITE Queens.
Each nabe sees itself apart from the other.

"Oh....that's Astoria's problem. This is perfect Bayside. We won't travel so far west as to stand up for you Astorians
.
By the same token....when was the last time you saw an Astorian take a long trip east to stand with Baysiders on their issues?

It is our village mentality that keeps us apart, and politicians know this and exploit this to their advantage.

I have a friend at the 104 as well and can confirm the deal is done, she agrees this is goint to be a disaster. Crowley and all then scumbags knew this was being "signed & stamped" months ago. The meetings were just for show as the 104 maps out new patrol routes and gets ready to deal with the war when this shelter opens.

And yeah agreed, keep electing and re-electing the same festering bucket of scumbags Queens good job !!! Now your homes are going to drop in value as Maspeth becomes the new bowery district. All planned by desighn.

> Now your homes are going to drop in value as Maspeth becomes the new bowery district.

Which will make it the only affordable neighborhood in Queens as every other nabe gentrifies beyond affordability.

It ant gonna be affordable--all them small homes are gonna get blockbusted and PLOWED when the good people grab what they can, cash out and flee. Replaced with multi family boxes. The scumbags will find a way.

two posters are starting rumors claiming that they know or work with the commander of the 104th pct. Both Anonymous. I say hogwash, it's a tactic to stop people from organizing.

as for Maspeth looking the Bowery. Have you been there lately? it's been upgraded.
there's a Whole Foods on Houston and the Bowery, the flop houses are history.

It took the Bowery took 25 years to become a decent place to be, before it was bums drinking whiskey sitting around a fire barrel.

Not against homeless people. How about the news stations do a report on life in the shelters?
Show the living conditions these people have and maybe our mayor will decide on giving these people what they deserve a home. Obviously they all had homes until they were pushed out of them. Why?
Why is there not enough help for those mentally ill? Yet they walk out street and make the headlines when they strike out?
You allow these high priced apartment buildings to go up but no affordable housing.
I want to see some news organization do a 20/20 on life in NYC shelters. I bet lots of these people could have been helped by the city before the city put them in a hotel room.