It's not just about how a building looks 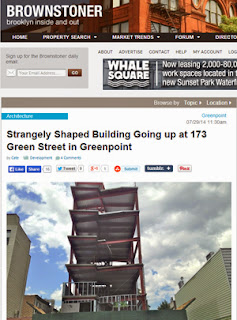 Yesterday morning I had this article (which is screencapped at left) brought to my attention by my comrade over at Queens Crap. I pointed and clicked my way over to Brownstoner. This is what they elected to say about 173 Green Street:

An unusually shaped building designed by architect Natalia Donskoy is going up at 173 Green Street in Greenpoint. The front of the building is not straight across but angles in four directions.


The Alt-1 permit calls for four stories and seven units. Donskoy, a former employee of Robert Scarano, is becoming known for sometimes mold-breaking designs in North Brooklyn. What do you think of the design?

This, their post, left me absolutely flummoxed for a number of reasons. Follows are two:
1. Although it is clearly discernible in the second photo they elected to publish, no mention whatsoever is made of the Stop Work Orders. Yes, this property has not one — but two.
2. As it would happen I reside in the general area. I have seen the shitshow that is 173 Green unfold. A number of my neighbors/buddies have as well. Aesthetic considerations aside, we all agree on one thing: These Stop Work Orders issued were well-deserved.

After I got done taking the photographs which grace this post, I bumped into a friend of mine who happens to live on the same block as 173 Green Street. A neighbor, if you will. A neighbor who informed me that he/she has in fact lodged a number of complaints about 173 Green Street. Among the things this person has observed:
And a litany of other offenses which generally make people upset and call 311.
Posted by Queens Crapper at 12:09 AM

It looks like someone is setting up to play Donkey Kong there. God forbid it's another homeless shelter.

Not to mention, there is CLEARLY five floors on that structure (not including the bulkhead space at the very top left).

lets start at the top:

#1, it's four floors and a mezz, the half floor above the 2nd is clearly a mezz.

#2, concrete enforcement is on it. those guys don't screw around and they've got a direct line to the borough commissioner and people with serious leverage.

#3, CEU is under the umbrella of tim lynch, the mythical god of DOB who will not stand to see the city get embarrassed. he will go there and put a fence up himself if he has to, because he's a little crazy, but he is not someone you want to see on a job site, ever.

#4, DOB can and will post a vacate on the building, which would subject any violators and the developer to major civil and CRIMINAL penalties. FDNY and NYPD are bound by these, and these things happen.

#4, if they violate the SWO, in addition to $5k per violation, the city will generally walk around and ticket every loose guardrail, every missing screw from the job, every person not in a harness, everything. all of it. write that check for $15k to the city of NY please.

#5, the developer will never get a CO unless all these fines are paid. they've got a roughly $20k tab right now.

BIS listed a phone number for concrete enforcement in one of the complaints -- 212-393-2730. it's a cell phone, but you'll get someone who knows the site and what's going on. but be aware, many in CEU are very intimidating and they WILL ask how you got the number. it's on BIS.
-somethingstructural