We may soon have a gun offender registry 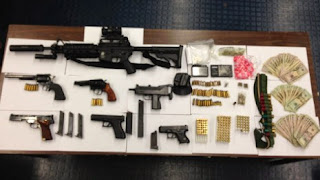 Individuals busted for gun offenses will most likely be listed on a public registry- much like sex offenders.

The city council is introducing a bill tomorrow–co-sponsored by Costa Constantinides–that aims to combat gun violence by mandating that all gun offenders are listed on an online registry, which the public can search. Individuals can sign up for free notifications, so they can be warned whenever a new offender moves into their neighborhood.

The bill, if it were to become law, would operate citywide. However, the city council is looking to pass a resolution that would ask the state to pass a bill that would put this registry into effect statewide.
Posted by Queens Crapper at 12:14 AM

Oh I can't wait until we hear a story about some overzealous community members trying to chase off a registered gun offender who moved into their neighborhood only to find that he was armed.

If he's dangerous, leave him in jail. If he's rehabilitated, then let him live and work in peace.

How about on online listing of ALL gun owners in the state? And all of their purchases.

good.this might put honest gunowners in a fit,but if they have the permits they should not be worried.

Gun violence is a real problem in Astoria, Costa. Not. Whose marching orders are you following?

How about the Steinway Mansion? Whose orders are you following there?

Anon #2: there is a list of gun owners, which can be downloaded from this site:
https://sites.google.com/site/whospackingnyisback/

If you are not packing in NYC, you are a "victim to be". Outlaw guns, and only outlaws will have them, and you won't, and they know it.

We're Queens - We Can't Have Nice Things said...
How about on online listing of ALL gun owners in the state? And all of their purchases.

You have no balls, that's why you live in third world new york with the niggers, spicks, and muslims and a marxist wack job as a mayor that tells you how to live like a good little bitch that you are

BAD BAD BAD !!
This is a Trojan for adding a public registry for legal law abiding gun owners. (The scumbags can look-up what homes are armed and what homes are safe for the taking.
Don't we have enough home invasions, robbery's and kidnappings resulting in death ?

Quote: "How about on online listing of ALL gun owners in the state?"

Guns are best and safest when the the crooks don't know who has them.
Great Britain shows the perils of mass confiscation and disarming the police. It has a higher violent crime rate than the United States and especially high rate of home invasion burglaries. Allow me to demonstrate the “perils of mass confiscation” here look:
USA -approx 10 gun deaths per 100,000 people UK -approx 400 gun deaths per 100,000 people The only danger with guns is listening to Cuomo IIs mouth or watching any Senate Judiciary hearing and wanting to shoot yourself. If it wasn't for guns we would be flying the British flag and sipping tea !
For all you anti-American pinko commie liberals who hate guns have a look at Queens in 15 years:

You're just making shit up Ned.

Yes. The gun homicide rate in the USA is 90 times greater than in the UK. The

I'd like to point out the large disparity between the UK murder rate and the US murder rate is in how the numbers are arrived at.

In the US if a coroner established that the death of an individual was caused by another individual that death is counted as a homicide (murder).

In the UK a firearm death of an individual is not considered a murder UNTIL someone is CONVICTED of cause and if that murderer caused multiple deaths with the same gun it is counted as ONE.
In simple: The limeys Home Office doesn't count dead bodies they report **convicted** killers (1 in 10 perhaps).
The gun grabbers and journalists never tell you this or do the conversion math !!
NOW SHUT UP AND GO SIT IN THE CORNER AND LEARN YOURSELF SOMETHING !

Homicide is in no way the same as murder Ned. The intentional homicide rate in the UK and other civilized nations is much lower than the US. That's what happens when you flood the country with guns. People die. Not just from civilians. From the police as well.

But you go ahead and pretend that isn't true. Live in your fantasy world where everyone is out to get you and the only thing that protects you is your collection of assault rifles.

Remove the ghetto crime committed by ghetto thugs with illegal guns and our murder rate is probably about the same as the UK. You can't fix the culture divide.

You can give them cash and a good education like other rich countries do and then they have something to lose and don't feel like going to prison.

Naaa !! Some 60s reformed hippie college, law-school professor or academy brain-washer spoon-fed you that bullshit Anon and you think its a meal.
Look at the big picture and facts particularly murder rates in the United States from 1950 till today. Notice how they go up ASTRONOMICALLY shortly after a moratorium's on death sentences, gun controls and the immigration act were imposed by the liberals by the late 1960s.
Capital punishment and armed citizens serve as a deterrents that save innocent lives. To add both are morally justified if that's what irks liberals.

The capital punishment and gun opponents will always be bitching as sure as the scumbag thugs will always acquire them illegally. Its always the liberals, the same people re-electing these jackass politicians who find it "progress" to slowly chip away the constitution and flush our rights (and America) down the toilet.
I am convinced liberalism is a mental disease that's best kept over in dirty Europe. Do you really want America to turn into another Canada, France or Sweden ? Jeez think about what you wish for.

"You can give them cash and a good education like other rich countries do and then they have something to lose and don't feel like going to prison."

They already get free cash and a free education. They still prefer to wallow in poverty.

Next they will want you to register the books you read, the TV shows you watch, etc. It's a slippery slope I tell you.

"They already get free cash and a free education."

A lot of public schools are shit, and CUNY isn't affordable on a minimum wage job anymore. They get a shit education. They get cash, but not enough to live tolerably. Hence, crime.

"America to turn into another Canada, France or Sweden "

All beautiful countries. Try visiting them some day.

"Remove the ghetto crime committed by ghetto thugs with illegal guns and our murder rate is probably about the same as the UK. You can't fix the culture divide."

The UK has an underclass. They're just given enough to get by and are treated with greater respect so they don't turn to crime to survive.

Nutters like Ned live in their fantasyland and will never be convinced of the truth, but for those who are curious yes there was a substantial spike in crime from the 70-90s, for those interested wiki is a decent place to start

There was a spike in crime because of the crack epidemic.

We give people more benefits than minimum wage would buy them. It's time to stop pretending that ghetto culture is not a part of the problem.

It provides a sampling, not the entire database - apparently no one in Flooshing owns a gun!

I'm not so sure about that - we have a lot of Soprano wannabes out here!

Never said that, I said "particularly murder rates" NOT SPIKE IN GENERAL CRIMESTAT !!
To add the "crack spike" didn't arrive till around 1983 when Pablo Escobar flooded city's with cheap high quality cocaine

I don't know what these people are looking at but burglaries (as when the crooks enter homes) in Scotland and Australia spike off the chart above the US as soon as they ban guns from citizens hands.

Ned crack was only part of it. Lead played a large roll too, and that goes back before 1983.

Also, comparing crime stats between nations gets messy if it isn't intentional homicide as crimes are generally different. The closest think to burglary in Scotland is housebreaking, which is committed not much more than half as much per capita as in the US. Doesn't matter much what the crime rate was in 1992.

"How about on online listing of ALL gun owners in the state? And all of their purchases.

It would be nice to know where the gun whack-jobs live - you might not want to walk your dog in front of their house! Or you might want to throw your dog shit on their lawn!"

Except for law enforcement - in NYC - it'd be a pretty short list.

Sons:
The licensing fiasco here is also unconstitutional, for a lot of reasons. The fees, are the highest in the nation. $440 just to apply and don’t expect your application to be granted. The purpose of these fees is to dissuade people from applying in the first place.
To add, gun control roots are in RACISM !!! As in RACIST attempts to limit the freedoms of African-American citizens after the Civil War and TO THIS DAY but I don’t see all these pinko America loathing liberals howling, bitching and Rev.Al marching about it!!
Licensing decision are purely at the discretion of a handful bureaucrats living in gated communietys, who can deny you for any reason including complete discretion to revoke the license later.
Don’t ever accept a doctors prescription for Ambion, Zanex or any meds for insomnia or anxiety if you have a CCW (they then say your nuts and revoke your permit).
This ass backwards European mentality should all be reversed in a couple years, the Governor and all these democrats may be getting the flush chain big-time, people are getting really fed up with them.
People should be allowed to stand ground and protect themselves, wives kids and family when you cant get to a phone or the police cant make it in time to save your ass.
Some people don't "get it" until they become a victim tied up watching some "sub human urban scum" kill-rape your wife or daughter because there was not enough cash or jewelry in your house. -Home invasion is out of control and gonna get worse.