DeBlasio planning to destroy something that actually works 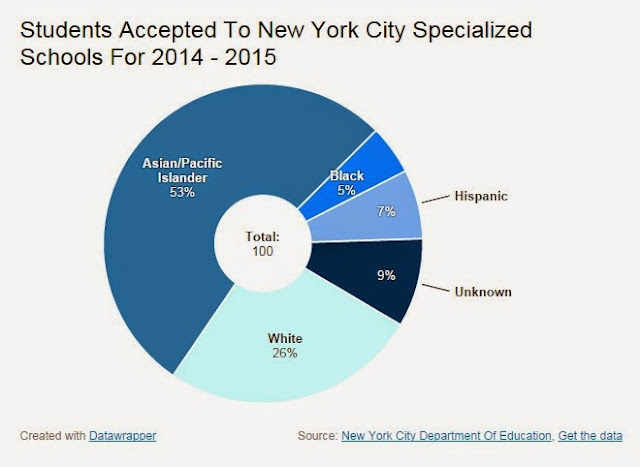 Even though nearly 70 percent of New York City's public school students are black or Hispanic, very few will be attending the city's most elite public schools when the doors open next week. According to some alumni of these specialized high schools, that doesn't mean their admissions systems are necessarily unfair.

The chance to attend one of the eight exam-based institutions -- like Stuyvesant High School -- depends on the student's score on the Specialized High School Admissions Test (SHSAT). These schools are considered among the city's best, and competition to get in can be fierce.

"In my opinion, the test system is purely on the basis of merit. There's no room for discrimination or bias," Larry Cary, president of the Brooklyn Tech Alumni Foundation, told The Huffington Post.

Cary is part of the newly formed Coalition of the Specialized High School Alumni Organizations, which represents over 100,000 graduates of those New York City schools. This week, the group announced that it believes the admissions process based on a single exam should remain unchanged.

The New York state legislature established the entrance exam system in the early 1970s for Stuyvesant, Bronx High School of Science and Brooklyn Technical High School. As more specialized schools opened, they adopted the same system for the most part. (The city has a ninth specialized school, Fiorello H. LaGuardia High School of Music & Art and Performing Arts, that chooses its students based on a combination of auditions and academics.)

Over the years, there have been attempts to reform the admissions process to ensure that the benefits of attending the best public high schools reach all communities in the city. Just this June, state legislators introduced a bill that would require the specialized high schools to factor multiple measures, such as GPA, into their admission decisions, as opposed to relying only on the SHSAT.

The Coalition of the Specialized High School Alumni Organizations disagrees with that approach. The group argues instead for a new initiative to give underrepresented communities access to better SHSAT test preparation and for a policy of letting students on the cusp of admittance apply again.

There are bright children of all races. The reason why there are fewer Black and Hispanic students accepted into prestigious schools is mainly because they tend to be stuck going to shitty middle schools which don't prepare them adequately for test taking of this caliber. So instead of fixing the middle schools, DeBlasio wants to dumb down the admissions process. Of course, the graduates of these schools are smarter than DeBlasio.
Posted by Queens Crapper at 12:47 AM

And let's not forget uninformed or apathetic parents, Crappy. As many commenters have noted elsewhere, how many early childhood learning and prep/cram school banners do you see flying in Harlem? Not saying culture is everything, but it does have an effect when you belong to a community that prizes these things and applies some collective pressure.

How can these schools retain their elite status once they lower the bar to admissions? Oh that's right - we're dumb Americans - we hate all things elite!

The big issue is that lower income parents need to encourage reading and scholastics over dumb-ass soccer and mind-numbing shopping!

Perhaps these kids should be in bed earlier. Check out Corona and Elmhurst - little kids are out with their parents at midnight - every day of the week!

It's a cultural thing - Asians value education more than any others. They send their kids to after-school programs. Perhaps it's less fun but they certainly achieve more!

DeSleazio is such a disappointment! He and MMV and MK will destroy NYC even more so than the little clueless dictator Bloomturd!

"Open admissions" destroyed CUNY which was one of the best university systems in the US. I taught math for 31 years in the NYC Public Schools. There is only one way to become proficient in math, practice. As the standards were lowered during my tenure I watched great NYC HS's turn to trash. There is only one route to success; hard work & determination. Today's PS's suck because we tolerate everything. It isn't a Black/Hispanic thing it's a will to prevail that matters. As a 67 yo VietNam vet I can tell you that standards are what used to differentiate us from the rest of the world. Long live Queen's Crapper! Congratulations Israel on victory in Gaza! Long live my amazing NYC teacher's pension!

Its the parents - if they do not instill behavior that produces the discipline and mind set needed then their kids will almost never discover it on their own.

Yea, its a cultural thing. Your culture celebrates gansta, fine, but forget about the non-ghetto world.

This is absolutely ridiculous. And I say this a Black person who graduated from Bronx Science (c/o '97), with brothers who graduated from Stuyvesant ('01) and Brooklyn Tech ('03). My brothers and I had very involved parents, and all went to great elementary and middle schools in Brooklyn. Our public middle school, which was predominantly Black and Latino, required a test to get in, and everyone had to wear uniforms. The parents of those students were very involved, and the results showed.

De Blasio should work on improving the educational pipeline so that everyone has access to quality early education, instead of lowering the standards at the end. Nobody will benefit from that approach!

Your last paragraph says it all, Crapper. The stereotypes that the commentators cite don't.

The parents (usually parent) don't give a shit because they have kids by accident or to get more cash from the government.
Its worse with the feral people running across the border.
The only hard work & determination these people know is GET TO NY or California for all the free stuff and these pregnant Mexican and central American women with 5, 6, 6, 8 kids are being dumped here in hordes.
Due to the current situation deBlasio has no choice but to drop passing requirements bar to 3rd grade level or these illegal kids would be in school for life.
To add, the democrats WANT a dumb populate that will need to be loyal to them to get all the free handouts.
The NYC school system is FINISHED. In Ridgewood every white friend I know with small kids is selling everything to move into a Long Island school district
Look at the shopping lists for public schools this year, rulers, composition 3 ring notebooks, pencils and sharpeners are-OUT
Finger paint, water glue, crayons, plastic sizzers-IN

If these schools change to accommodate the unprepared students, the schools will become like any other public high school in New York City - with a small percentage of the students behaving badly and sucking up all the time and energy of teachers and administrators and disrupting the ability of the children who want to learn to excel.

If these schools don't change their standards and content, the unprepared students will be crushed in the gap between their inability to read and write well, and the level of reading and writing that is demanded of them.

74% of the students are minorities and only 26% white!! Let's use those statistics in the headlines.

As a graduate of Brooklyn Tech, i'm sad. Now people who don't belong will ruin the the learning atmosphere. Everyone gets a trophy...........

I remember Andrew Wolf writing a decade ago, in one of the many columns about the public school system that he did in the New York Sun, about how Carmen Farina was biased against the city schools' gifted programs. I guess now she has the power to carry out her plans.

The progressive elite have finally changed the definition of a minority. if any one group succeeds by hard work it is the Asians, who by and large are not economically advantaged. Read Dennis Saffran' s great article in the City Journal dated August 14 which systematically destroys the left's arguments for changes at the city's elite high schools.

Because of all this I cant sell the house in Ridgewood. Working class people with kids want no part of the school system. The kids exiting IS 77 behave like a bunch of animals coming down the street 3PM, pregnant single mothers picking up grader @ PS68 stop in the bodega on the way back and throw garbage, Popsicle wrappers on the sidewalk even if I put a trashcan out my neighbors and myself have gotten into "heated arguments" These woman yell with these f_ckking 3rd world pigs several times. I put up 2 IP cameras back in May the pigs then walked across the street. I cant imagine how much worse things are going to be this school year.
Other potential buyers & real estate agent commission sellout scum leaving me notes claiming to have cash "on behalf" of a nice friendly buyer.
BS.._F_ them private sale !!

The Left? So far, all I see is DeBlasio. I don't see a lot of people on the Left calling for this change. Nor will they.

And I'll bet that DeBlasio gets a warm reception to this proposal the next time that he goes to a PTA meeting at Brooklyn Tech.

Explain to me how grades, recommendations, a portfolio of work, and other highly subjective criteria will somehow make the selection more objective....
For decades, everyone wanted an objective measure, a level playing field etc. Despite any other flaws inherent in a test, it is as close as possible to objective.

DeSleazio's son is the class of 2015 @ BTHS so the changes wont affect his offspring.

What makes any of you think that the specialized high school entrance exam is a perfect representation of a student's abilities? One of my kids tested at 131 IQ and got a 2250 on his SAT but only once earned a Level 4 on a NYS ELA exam... Furthermore, some of the students who get into the specialized high schools are prepped to death for the exam but then not actually capable of excelling in the schools once they get in.. High schools for gifted students in the rest of the US almost all use multiple criteria to screen students, not just one test as we do for a handful of High Schools in NYC. Also, plenty of top NYC high schools and selective programs within high schools - like Baccalaureate School in Astoria and Bard Early College High Schools - use multiple criteria in their admissions decisions. Even Ivy League schools use multiple criteria - did you know that a student can earn a perfect SAT score and still not get into Harvard or Yale (and many of those admitted do not have perfect scores)?