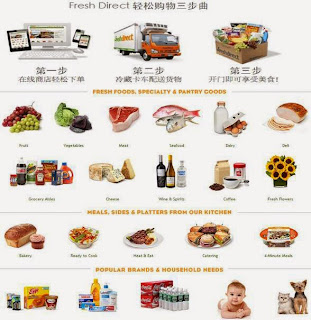 ESD is about to give Fresh Direct a $9 million grant and a $1 million loan to move/expand from Long Island City to the South Bronx.

Unmentioned are previous promises (which may have been adjusted) of $18.9 million in state Excelsior tax credits; $4 million in state energy grants and incentives; up to $1 million in vouchers for the purchase of electric vehicles; about $74 million in city sales tax exemptions, mortgage recording tax deferral, and real estate tax exemptions; $4.9 million in city energy benefits; $1 million capital grant from Bronx Overall Economic Development Corporation; and a $3 million loan and $500,000 capital grant from the Borough President

Let's put aside the strangeness of the city and state subsidizing a cross-borough move based on a perceived threat from New Jersey, an unlikely base for a delivery service that needs quick access to Manhattan.

Or that Fresh Direct is moving after having gotten subsidies to stay in Queens through 2025.

Or that neighbors (see South Bronx Unite) pose some heavy concerns about the project's environmental impacts, and that if the promised job total is not reached, there's no "clawback provision" to recover subsidies. (See Good Jobs New York timeline.)

The really strange thing is the reliance, according to ESD Board Materials (p, 51ff.), on the EB-5 immigrant investor program, in which foreign millionaires, mostly from China, park $500,000 in a purportedly job-creating investment, get green cards for themselves and their families, and later get their money back. (In this case, they're getting a relatively high--for EB-5--rate of 4.5%.)

The developer gets cheap capital. The public is supposed to get 10 jobs for each investor.

According to promotional material supplied almost surely by the New York City Regional Center, the private investment pool set up to market EB-5 investments (and reap fees), the project would not be $166 million in total, but $208 million.

That's not the only misleading part. EB-5 funding is said to make up just 40% of the project, rather than more than 50%.

And Fresh Direct is said to be providing the rest of the funds, which is clearly not true.
Posted by Queens Crapper at 12:15 AM

Is this all on top of the original $127 million?

Don't complain: these programs DO generate jobs: for private equity investors, and wealth managers... we just saw EDC move a business from Brooklyn, based on location in a flood zone, to a LOWER waterfront elevation on Staten Island. Plus, the only other business of this type is also in Staten Island, so EDC brought in competition for the locals. AND there's a net decrease in jobs - further, the new business will be using pre-fab construction: there aren't even short-term construction opportunities. WTF? Our tax dollars at play.. . 'cause they're sure not at work!

Holy shit. It's scams on top of scams with these guys.

contact deblasio and tell him kill the fresh direct deal!

The NYCEDC is probably the single most corrupt entity in NYC that spends tax money, and that designation I make with careful consideration.

EDC is the only office that mayor fun size funded and ran efficiently during his reign and for obvious reasons.and the blaz is emboldening it even more to make his base happy,which is generation gentrification,who don't even want to walk an extra few blocks or drive themselves to buy groceries or even anything else.