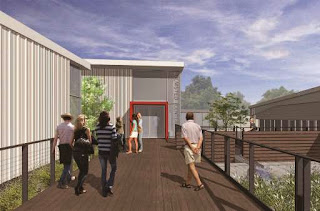 But the Olmsted Center in Flushing Meadows Corona Park, which was constructed in 1964 and used as temporary offices for Robert Moses and the World’s Fair Corporation staff during the colossal event, is also getting a makeover.

The Parks Department announced Aug. 4 that it is collecting bids for a contractor to renovate the center, which is named in honor of Frederick Law Olmsted, co-designer of Central, Prospect and Riverside parks. Today, the building houses the bulk of the agency’s capital project staff.

The renovation project, which is designed by BKSK Architects, is split in two phases.

The first is the expansion of the center with a new 10,000-square-foot annex building, which is nearing completion.

The second phase, which will commence in early 2015, will technologically enhance the building and resolve flooding problems. It will include a new water channel system to lead water into bioswales that will contain and absorb it.

Is it me or does this look like a giant storage facility that you'd find next to a highway in the Midwest?
Posted by Queens Crapper at 12:42 AM

This doesn't belong in the park. It shouldn't be renovated, it should be torn down and replaced with park land - trees, fields, barbecue pits, something open to the public. How much of the park is actually park land open to the public? So not a highway. Not a road. Not a rail line. Not a parking lot. Not a stadium.

Of course we have to upgrade offices. Where else will the do nothing bureaucrats sit as they collect our tax dollars? Just ask the MTA board. If not an office building, money just goes into a rainy day slush fund anyway.

Where are the windows?

They fix up an office building while allowing other architectural relics of the last Worlds Fair to rot.

However the parks department executives must be comfortable while assisting the Wilpon's in the construction of their mall on stolen park property.

A building in a Queens park named for the Central Park designer.
Quite ironic!

Central Park has hundreds of millions of dollars in their personal coffers while FMCP goes begging for funds to restore it's historic World's Fair structures'.

It's not the executives who sit in the Olmstead offices. It's the peons who do surveys and capital construction projects (I happen to know a few of them). Think about it. What executive would ever elect to spend every day sitting in a trailer with few windows. I visited that trailer once and I'm grateful I don't work there. It's worse than a cubicle farm; there are no walls. I hope the workers get something a little nicer.

How about putting offices into an actual office building?

"...spend every day sitting in a trailer with few windows."

You'd be amazed at what a Sawzall could do.

What are they talking about ?
Moses did have an office section however the building had lots of glass and was primarily for head starting young plants, seedlings and things before being moved to the outside flower beds after last frost. (to keep on schedule with opening days)

If there are flooding problems, why would they renovate and then take flood precautions?

f there are flooding problems, why would they renovate and then take flood precautions?

You can say that about anything being built on the waterfront. Our taxes will be used to bail out the developers/campaign donors thanks to you reelecting the recipients of the same.