Q train to be diverted to 125th Street 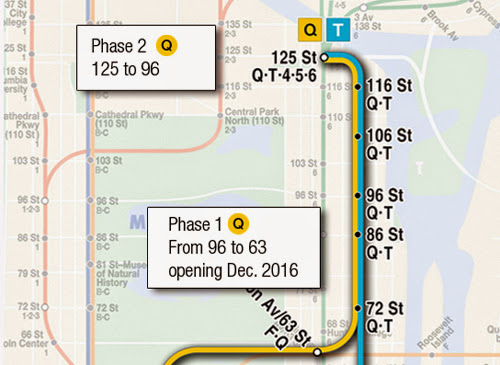 The future timeline of the Second Avenue Subway has been uncertain, but Benjamin Kabak of Second Avenue Sagas reports that today MTA CEO and Chairman Tom Prendergast announced that $1.5 billion will be included in the MTA's five-year 2015-2019 capital plan for construction of phase 2. Phase one will (fingers crossed!) finally open in 2016, extending the Q train from 63rd Street to 96th Street. Phase 2 will take the train even further north to 125th Street, connecting it with the Lexington Avenue line and MetroNorth.

So, Astoria should kiss the Q train goodbye?
Posted by Queens Crapper at 12:01 AM

It was a conspiracy to unleash bed bugs at this station to lower ridership and get rid of it but someone unleashed them on the N line instead by mistake.

Broadway tracks should have room to maintain the same number of trains to astoria.

I think that any community board that ignores the community, spends its time simply mouthing a script that the local second rate politicians give it, and dismisses anything that doesn't fit that script, as the need for infrastructure to support development, deserves any shit that comes its way.

So while money is wasted on ferry service that is totally impractical, no upgrade of facilities as the power grid and schools, cramming 10,000s next to a housing project in the middle of no-where (and bellyaching that their view will be lost) deserves to live with the stupid decisions they make.

No problem though. Since they have converted the shopping districts into college gin mills, they have many places where they can go to and take part in soccer riots, grim Muslim men smoking hookhas, silly kids whose life's obsession has been reduced to cheese and craft beers and tossing beer kegs in back allies at 4 AM.

The solution wold be to reactive the W between Whitehall and Ditmars.

This has always been the plan. They will bring back the W when 2nd ave reopens. If they don't, there will be hell to pay.

chester here. you only need one line for astoria. the n.