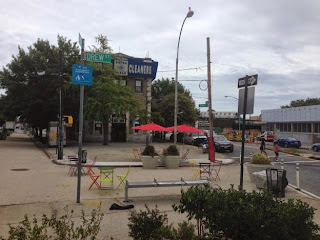 Supporters of the controversial Ozone Park pedestrian plaza defended the space during a meeting about the plaza’s future, calling it an oasis in a neighborhood that is starved of public space.

But others said the plaza, located on Drew Street and 101st Avenue, is detrimental to business owners who feel that the loss of parking and the cut-off of two-way traffic is causing sales to drop.

“We wanted to create an open environment for the community,” said Darma Diaz, chief operating officer for the Bangladesh American Community Development and Youth Services Corporation (BACDYS), which is responsible for the upkeep of the plaza. “This plaza gives the opportunity for the community to have a place to go.”

She noted that public space is so minimal in the area that children have to use the nearby municipal meter lot, located at Elderts Lane and Glenmore Avenue in Brooklyn, for activities.

“This is the only place we have in our neighborhood where children could get together,” said one attendee of the Aug. 21 meeting at Queens Borough Hall. “We have never had a place for us to get together [until the plaza].”

But Khemraj Sadoo, owner of Super Clean Laundromat, located on the same street as the plaza, said there is viable space just two blocks down on Elderts Lane in Brooklyn and wants the plaza moved.

“We need the plaza moved,” Sadoo said. “Who will accept such a plaza in front of his face with such loss of business?”

I don't know, every time I see a photo of this plaza, it is empty. Maybe the community doesn't really need or want it. As for children getting together here...to do what?
Posted by Queens Crapper at 12:43 AM

The missing street furniture was probably stolen and sold for drug money.

I thought all of the merchants were in board with the installation of this plaza. At least that's what DOT and the community board had you think at the meetings last year. Hmmmm.

Look at the shitty public space in Jackson Heights! It looks worse than Juarez in the TV show "The Bridge"!

Then head over to Brooklyn and check out the gorgeous public spaces.

Sorry to say but the people here don't get it, don't want it, don't appreciate it, and then destroy it.

Greetings from Staten Island- I attended a DoT-sponsored info-session on pedestrian plazas yesterday... these plazas may be great for some places in the city - but NOT for places where transportation does not consist of bikes and mass-trans options. DoT is well aware of this! The DoT site has a map of where they've been emplaced... which belies the "distressed socio-economic area/lack of recreation opportunity ballyhoo. PLUS, if these are going into distressed areas, where are the substantial funds - i.e. liability insurance, maintenance, et al., coming from? nThere are many reality-dissonances here...

What happened to the one that was supposed to be installed at Myrtle & Cooper ave?

I think it was to have been completed by now.

I thought the plaza was full of trash? Where's all the trash?

They knew there would be coverage of it so they removed it in advance. They aren't stupid, just lazy.

The building on the right used to be a Bohacks supermarket, then a Rite Aid, and soon will be a Walgreens. So this may bring more foot traffic to the plaza. The large building anchoring the plaza used to be one of the first Chase Manhattan Bank branches outside of Manhattan. As the neighborhood declined in the 80s and 90s it closed and became a laundromat. The McDonalds behind the laundromat opened in the early 70s and used to be one of the busiest in Queens. It's days are numbered as the neighborhood turns increasingly Muslim. Ozone Park and CityLine used to be one of NYs largest Italian-American neighborhoods. Prior to that, there was a very large Jewish population here. The area is in constant flux.

I haven't seen any pictures of the plaza full of trash. Could someone post one? The closest I've seen is one that had full garbage cans, but nothing on the ground. Looked like the plaza was being used from that. I don't understand why people are so upset about this and I'm trying to.

This article is not about trash, it's about the businesses being hurt by it.

...and the lack of oversight on behalf of the non profit organization that requested the plaza. What programs were run this past year? What were the funds used for? Who is the administrator?