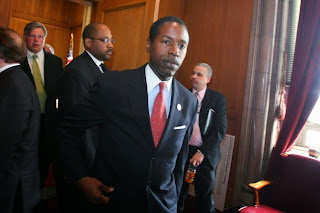 Embattled State Senator Malcolm Smith told a Queens audience last night that racially motivated forces of gentrification are behind his indictment on charges he attempted to bribe his way onto the 2013 Republican ticket for mayor.

At a debate in the Majority Baptist Church against his two opponents in the Democratic primary, former Councilman Leroy Comrie and attorney Munir Avery, Mr. Smith was given two minutes to address his legal problems. Mr. Smith warned the crowd that the accusations are part of a plot to eliminate a powerful black outer borough politician and target his district for real estate development and racial displacement.

Mr. Smith continued that he could not yet name who was behind the plot he alleged–which he claimed was behind the recent indictments of other prominent black elected leaders–but said that the culprit would be revealed at his retrial in January. Prosecutorial mishandling of evidence caused an upstate judge to declare a mistrial in the initial proceedings against Mr. Smith in June.

“You will see my innocence is exactly what I say it is. You find out who is behind the attack on all the African-American leadership in this city, that will come out as well,” he said. “If you don’t believe southeast Queens gentrification is beginning to happen, look around.”
Posted by Queens Crapper at 8:46 AM

Hipsters made him do it?

It used to be that patriotism was the last refuge of a scoundrel, now it is the race card.

Personally, I always pictured Smith as a supporter of gentrification. Yet, I don't see how it has anything to do with his selfish ambitions being recorded, which is what tripped him up.

WOW, I want whatever drugs Senator Smith is taking. I meant talk about a distortion of reality!

Amazing, Smith, who each and every day takes himself to lower depths, has really hit rock bottom with this latest bullshit of his. Really, his crooked shenanigans were actually some bizarre conspiracy plot to overthrow black political leaders in Southeast Queens in order to then stage a mass gentrification and displace black people. Yes, I do want those drugs.

Every time this idiot opens his mouth, he just shows what an ass he is as well as the whole Jamaica good ol’ boys club which include, useless Comrie, who is running against him. Also in the running is the one sane voice of reason and some much needed fresh blood in this community, attorney Munir Avery. Unfortunately Bernadette Semple is no longer on the ballot and Clyde Vanel took a hike awhile back (which I am sure Comrie and his cronies had something to do with that).

But getting back to numero uno asshole, Smith. Even if Jamaica begins to experience gentrification, it is not like Jamaica is this wonderful place to live in, a middle to upper middle class black area, with nice homes, manicured lawns, clean, garbage free, low crime area with a wonderful downtown area that has fancy retail stores and great sit-down restaurants and great bars and lounges. With the exception of a few areas (Addisleigh Park, parts of St. Albans, parts of Springfield Gardens and Laurelton and Cambria Heights) Jamaica is a fucking mess. First it has a horrendous garbage problem all over that me, Pamela and others have been documenting for several years. Poor zoning has caused nice one family homes to be torn down to put up shitty low-class third world apartment buildings run by slumlords and filled with low-class slobs. Then there is the high crime rate, gangs, drug dealing, shootings on a regular basis, many which have resulted in the deaths of both the criminals and innocents. Add to that the slew of illegal apartments, illegal curb cuts, illegal parking, a major noise issue especially with backyard outdoor speakers, a shitty dirty downtown area that is filled with low-rent shitty retail and crap food places, dirty parks with garbage all over and let’s not forget all the garbage strewn vacant lots and abandoned houses littered all over the place. Then there is that big big mess called South Jamaica, a major disaster. Talk about a place that needs gentrification to help it rise above all this shit, it now seems that gentrification is the only thing to help Jamaica.

His comment about “look what happened to Harlem”. Like what Smith, Harlem is now a great place to live, with a vibrant restaurant and bar night life, nice stores popping up and property values rising. Before what took place in Harlem, that community was on it’s last leg, a community with run-down and abandoned brownstones, high crime, shootings, drug dealing and other poor quality of life issues. So according to Smith, Harlem should have stayed down on the bottom, just like where Jamaica is now.

Smith, Comrie, Meeks, Wills, Cook and all the other useless leaders past and present had the opportunity to help improve Jamaica and each and every one of them instead choose to do some shady dealings to benefit themselves, misuse of funds, steal, cheat or worse DO NOTHING.

So Smith, go fuck yourself with your bullshit conspiracy theory. All you are trying to do is save your own corrupt and useless ass. In other words, it is just the usual Jamaica politics.

Funny though how people like Smith and Congressman Gregory Meeks have both supported all kinds of major development in Jamaica that would actually help lead to some gentrification.

Gentrification (Read: Hipster Trust Fund White People) makes everything (like rents)much more expensive. Mind you, nothing has changed. The buildings, and streets are the same. Services are still the same. It's just that you have demographic shift now, where you have a reverse migration of whites who are now moving into lower class neighborhoods, formerly inhabited by blacks and working class white types. For instance Astoria was (still is, in my opinion)a Queens CRAPhole except when out of town whites say it's not.
Amazing.
Goes for Harlem, and large swaths of Brooklyn(Fort Greene, Bed Stuy)

the only gentrification is in the middle of rockaway,the confederacy of douches have no interest in hollis,rosedale,jamaica,richmond hill(and south),ozone park(and south),even howard beach and broad channel.why?because those towns have no scenes and are mostly family oriented and they find that unattractive.

as for that subhuman shit Smith Shady,it is some feat to make those other frauds look more legitimate.he knows his number is about to come up and his luck is running out,so why not pander to the frustrations and concerns of the churchgoers.Just channeling his inner huckster/preacher.

The one commenter is wrong on "gentrification", with the exception that is increases property values/rents. Along with gentrification comes better services to the community: better stores, restaurants, etc, just like what happened in Harlem. Families have nothing to do whether an area gets gentrified or not, examples are Long Island City, Greenpoint, Fort Greene and Williamsburg, which before they were gentrified had many families.

These guys get a little power and they go apeshit.they are in office to make as much cash as they can,by whatever means there is. When they get caught they play the race card. There are plenty of cases that have disappeared and have been forever shitcanned. I'm sure the influence of Cuomo and the Holder/Obama DOJ is behind much of it.

Before the great exodus to the suburbs,these neighborhoods were mostly white and quite a decent place to live. I rest my case.

I am very happy to see white people in my neighborhood. they tip well in the restaurant that I work in, they hire locals for dog walking and babysitting, they recycle, they vote.