John Liu had a bad night in Flushing 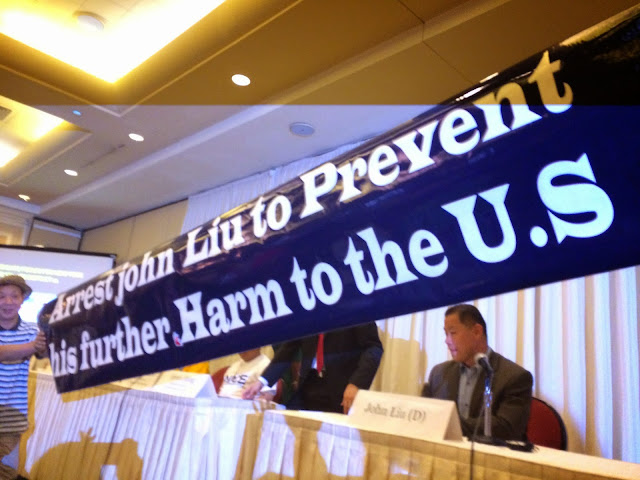 Three weeks before he faces incumbent Tony Avella in the Democratic Primary for New York’s 11th state senate district, John Liu was once again haunted by the skeletons in his closet.

At a candidate forum hosted by the MinKown non-profit, right before he was supposed to deliver a 1-minute and 15-second speech summarizing his platform to a ballroom of concerned citizens, protesters unfurled in front of Liu a banner that read “Arrest John Liu to Prevent his further Harm to the U.S.”

A female protester started lambasting Liu in Mandarin about connections to the Chinese Communist Party, which drew loud, forceful responses from Liu’s supporters in the crowd, creating a brouhaha that lasted over 10 minutes and needed quelling by the hotel’s security guards.

Liu was phlegmatic about the disturbance, sarcastically referring to the protesters as “friends” who had been “following him for years.”

“I’ve been told that they are a part of my friends at the Falun Gong who have been following me for years, mainly because they firmly believe I’m a communist spy from China,” Liu added.

Fu Yuxia, the female protester, later told the Epoch Times that she was there to draw attention to Liu’s ties to the Chinese regime, which she said seized her home in Shanghai in 1997.

When asked about Liu’s claims, Yuxia said that she was not associated with Falun Gong.

On actual policy positions, Mr. Liu and Mr. Avella differed little. Each backed a higher minimum wage, the Dream Act, public financing of state elections and other liberal priorities. While Mr. Avella did not take aim at Mr. Liu, the former comptroller assailed Mr. Avella once more for betraying Democrats and progressives by joining a group of breakaway Democrats that governs the senate with the Republican Party (the Independent Democratic Conference recently agreed to ally themselves with the mainline Democrats after the fall elections.)

Policy, however, took a back seat to the brief chaos.

Here's a list of the reasons why John Liu is the perfect candidate to represent Joe Crowley's Machine.
Posted by Queens Crapper at 12:38 AM

He's a Fake, Phony, Fraud. God only knows what he was doing while city comptroller. Has anyone suggested an audit?

Even the Asians donuts want Liu. The only supporters Liu has are the democratic hacks who do as they are told by the democratic machine. By the looks of the dirty lying mailers Liu's team has been sending they must have hired the same people Vallone used to trash his opponents.

Vote for Tony Avella. His record speaks for itself. He has been fighting for our community and has passed laws to protect our community. Without Tony our neighborhoods would have been compromised years ago.

Can you see white people from Queens standing up for their rights like this?

Absolutely not. They may be angry. They may know they are getting a raw deal.

But they are polite. Isn't that nice?

The Queens weekly rags are working themselves into a lather supporting Liu.

I'm very disappointed that Austin Shafran has put loyalty to the Democratic machine ahead of principles and is working as John Liu's spokesman. I had been impressed with Shafran when he was running against Paul Vallone - but this will sully his reputation.

Which is one of the reasons that no one in NYC takes Queens seriously. The Manhattan machine has been in eclipse for a half century while we still live in the age of buggies and horsewhips.

Austin Shafran's old man, Ron Shafran, works for Michael Nussbaum at the Tribune and Nussbaums's Multi Media political promo company. All the regular Dewmocratic pols suck up to Nussbaum. He gets them elected with Multi Media. Austin Shafran is not going to upset the apple cart. He does what he's told.

"When asked about Liu’s claims, Yuxia said that she was not associated with Falun Gong.

And what if she was part of Falun Gong? They can express their opinions as well, no?

"The Queens weekly rags are working themselves into a lather supporting Liu."

Because they need the dems and their $$$ for all those legal ads.
They also make their money off of endorsements, massage parlors and prostitution ads.


"The Queens weekly rags are working themselves into a lather supporting Liu."

Not all weeklies are the same.

Please provide links to the articles you refer to, because I've missed them and want to see what they're up to.

I do see decent coverage of Avella's frequent quality of life press conferences. Do you not see those?

I keep my eyes wide open all the time said...

The Tribune is the only community rag that runs whore ads.

I am certain that John Liu is a puppet for the "regime" in China. (It's not a Communist regime anymore it's just a dictatorship).

I think he hates Falun Gong because he's ordered to by Bejing.

They hare him because he does the bidding of Bejing and so now he has a second reason to hate them.

John Liu is a very evil person in my view who is a traitor to the United States, the land he has lived almost his entire life, as well as Taiwan the land he grew up in.

I think that there are three types of people who vote for John, traitors, crooks and morons.

Two weeks ago you teased us with a new scandal for Liu.

John Liu not only has the same straw donors that he had last time, but they have fake addresses.

Are YOU EFFIN kidding me? (John's fake donors are "donating" again?)

If that is the case he's not only the crook I always thought he was he's a dope of monumental proportions.

Is there a newspaper on this?

Multiple papers ?
Liu's a Democrat. The papers and TV are just as corrupt I wouldn't hold your breath crappy.
Unless Liu gets caught in what the press feels a really big scandalous sensational story that distances him from his "special friends" nothings going to happen. Nope, Not without a "nod"

"Don't know what's taking so long"
Could be a press embargo going on till the paper editors get the green light to run the story's.

If you vote for Liu, your neighborhood will turn to poo.

Queens Crapper Said:
"And what if she was part of Falun Gong? They can express their opinions as well, no?"

Sure they can but at an appropriate time and place. Disrupting a meeting/debate is neither the correct time or place. It would seem they were trying to silence one of the participants.

You don't get anywhere being appropriate.

He didn't forget anything, he just listed specific subsets of that party. You're being redundant.

Liu's past votes in the city council added 20.8%to your property tax bills ,in 10 years.

Avella wisely voted NO for property tax increase at that period.

maybe he knew that the prog/commie city council would vote yes, but I will give him his due.

any pol. who is financed by left wing unions,S.E.I.U./Workers family party will spend and regulate nyc & nys citizens into bankruptcy. J.Lui is in their pocket aalways.

search: Norman Hsu, aformer bundler for dems.,including Lui ($5000.)can Liu prove that he gave the $$$ back to Hsu. Hsu is sentenced to fed. prison for 24 years for embezzeling hundreds of thousands of $$$$ and giving to Dems.