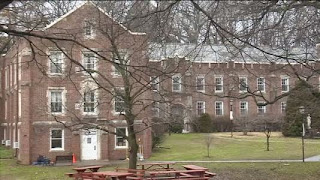 Despite protests and pleas to save it, demolition will soon begin at an historic Jesuit retreat center on Staten Island.

The Committee to Save Mount Manresa says homeowners in the area have received letters stating that work is set to begin, tearing down buildings on the 15-acre site.

The letter says Expedite Demo Inc. has been issued permits, and the demolition should take about two or four weeks.

The property houses an old water tower, a gate from the 1860s and a 1920s-era chapel and grotto.

A restraining order against the developers was rescinded back in April.

Don't worry, I'm sure those Staten Island pols, who are just about as useful as Queens pols, will step in any day now...
Posted by Queens Crapper at 12:25 AM

They should tap into the fighting spirit of Vallone Inc.

I'm surprised they didn't quietly turn it into a homeless shelter.

I'm surprised they don't use it as a place to house the "refugees" coming across our southern border.

They most likely will put yet another small strip mall with all the usual .....drug store ,nail salon, mini mart, and a bank...adding to all the other million that have gone up over the 5 boroughs lately.

Don't forget a pharmacy! We always need another pharmacy. When will we actually get a supermarket?

The five boroughs of NYC that are going to be plagued with shopping malls, banks, 99 cent stores, chain franchises, homeless shelters, McMansions and big glass towers!!! Wow what a site to behold and no charm in site. This city is going to shit with greediness, horrible politicians, no sense of preservation, no sense of good taste and the building boom of affordable housing! Other cities in the U.S. and the world thrive with being ancient, an old world charm and great urban planning, come on NYC we can do better...