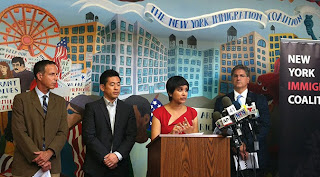 New York is among the states receiving the most unaccompanied children caught at the U.S. border, new federal data show.

The data published Thursday by the Department of Health and Human Services’ Administration for Children and Families show New York, Texas, Florida and California account for 46 percent of the more than 30,000 children who have been released to sponsors this year through July 7.

The U.S. has been grappling with a surge in the number of unaccompanied children who have been fleeing violence in Central America and crossing into the U.S. because they believe they will be allowed to stay.

The New York Immigration Coalition says close to 3,300 unaccompanied immigrant children have arrived in New York since January, with almost 7,000 more expected to reach the state in coming months.

Immigration service providers and the city are working closely to streamline resources for the 3,200 child migrants who have reunited with family in New York. But for the additional 10,000 who are expected to arrive in New York by the end of the year, it is unclear how such services will be funded for them. And for many, mental health care is a top priority.

“We need more resources to fund this,” said Steven Choi, executive director of New York Immigration Coalition. “Right now the government is taking money from existing refugee services—that are not well funded to begin with—to pay for this.”

The most important services the migrant children will need are attorneys and mental health care, and both are costly.

According to a United Nations report, 60 percent of child migrants are eligible for relief. The children, however, are not likely to receive relief if they do not have an attorney.

According to research from Syracuse University, 9 out of 10 children were deported if they did not have an attorney. As for the 52 percent who were represented by an attorney, five out of ten were allowed to stay in the U.S.

City Council Speaker Melissa Mark-Viverito called on New York City to follow Syracuse’s footsteps and offer shelter to some of the unaccompanied, undocumented immigrant children flooding into the country as they flee violence in Central America.

“These children are facing a horrific situation at home, which has led them and their families to make some really difficult decisions,” Ms. Mark-Viverito told the Observer at an unrelated press conference. “I think that we have a responsibility to respond to a humanitarian crisis that we have before us.”

As the federal government seeks a place to shelter children detained at the border as they await appearances in immigration court, some have been brought to New York to be placed in the care of relatives or sponsors here, according to The New York Times. Other cities, including Syracuse, have offered locations to shelter those who cannot be placed with family or sponsors, as reported the Times—and Ms. Mark-Viverito said Thursday she thought New York City should do the same.

She would be “more than open” to conversations figuring out how New York City could support the children, she said.
Posted by Queens Crapper at 12:14 AM

Make them build fully shaded Bocce courts for cheap. You want to enter the country illegally? You better contribute.

Of course our dumb congressmen allow this shit to continue. They never had to deal with overcrowded public schools-their children probably all went to or go to private schools. Of course they don't have to pay the same kind of taxes that we do either. Just wait within a year,you will see city taxes going up to fund new schools for these illegals and to feed them and pay for more free school lunches. This government is an embarrassment. But of course new Yorker will never vote these same elected officials out of office because 30 percent of the people who do vote in this state are illegals themselves or have illegal family members here. American citizens are no longer the majority in new York.

The 'dumb' congressmen know exactly what they are doing: driving out quality of life people or those who know their rights as citizens and bringing in people that need Democratic service programs, don't participate in the process and keep their head down as they live out their lives in an illegal basement and get paid below minimum wage.

The Democratic Party is filling communities in their district with people that have this profile ensuring that elections are meaningless.

How come they come North? Why not go further South to Argentina, for example?

In no time some Ktalian or Greek guy will have them working in their pizza shop or landscapping business, providing them with an income and facilitating their stay.

Then the relatives and brethren of the business owners will complain about illegal immigration. Hypocrisy.

Ohh shut up and live already, how will your lives be any different than they already are? Theres already millions of unruly teenagers on the streets after the schools close at 3pm...how will this make it any worse? The most vile and misbehaved children are not immigrants but those born in this country. That goes for the adults too
Legalize these kids so that they can contribute to the ssi and welfare checks that Americans live off of

SEND THEM BACK LIKE THE ROTTEN FISH THEY ARE!!!

With NY ID cards, they'll be registering as Democratic Party voters in a few years.

Cloward Piven in action. If you criticize Emperor Barry over this you are a heartless racist.

I still like how Honest Joe Crowley controls your lives, and manipulates your representatives to take care of his interests instead of yours.

This is entirely the fault of the Democratic Party - you don't see this garbage going down in Republican districts.

When the government shut down, and your government was paralyzed, he was getting arrested at a rally to INCREASE immigration including garbage like this.

So he comes to Queens, and leans on your representatives to drain ever more funds from you communities - funds that could help your communities - so that he can advance his career in Washington by bringing in the dough. The leadership on Capital Hill are still keeping him at arm's length. You might be stupid in putting this piece of work over your lives but most are not.

But since most of you don't seem to have much backbone, except to take your frustrations on each other, nothing will change.

So we're opening homeless shelters and we're not inviting homeless kids to come and make the problem even worse?

Build a fucking wall at the border. Shoot anyone who tries to get in illegally. I don't give one fuck if they are kids.

If they have problems at home, let them fix it at home.

I'm a pretty liberal guy but we don't need thousands of problem people flooding our city/country when we can't handle our own problems as it is.

Since they are illegal and cross our border, wouldn't it be more cost-effective to just close the border and deny access. Deport them at the border instead of scattering them across the states and paying their legal fees. Why do citizens have to bear the brunt of paying for these criminals? Why can't Washington question the leaders of these countries and have them come up with a solution. While they're at it, the US should deduct a dollar amount of aid for each illegal. So tired of paying for everybody else. I have my own family to raise. Let the liberals take the illegals into their own homes and raise them at their expense -- not ours.

Anonymous said...
Ohh shut up and live already, how will your lives be any different than they already are? Theres already millions of unruly teenagers on the streets after the schools close at 3pm...how will this make it any worse? The most vile and misbehaved children are not immigrants but those born in this country. That goes for the adults too
Legalize these kids so that they can contribute to the ssi and welfare checks that Americans live off of

Are you stupid? Wait until your taxes rise next year. These illegals children do not do well in school AT ALL- have you seen the "hispanic" failing rate in nyc public schools? I would guess not or else you would not have made such a dumb statement! Have you ever been to the WIC offices? See all of them filled with these illegals. Have you ever seen the subways? These illegals begging for money left and right on the subway, it is bad enough we have our own american citizens begging for money on the subway but we dont need illegals too! They all need to be sent back, we are not the world's orphanage!

just heard that Obama's agents are in Honduras to arrange flying the "refugees" (new Obama title), over the texas national guard on the border,paid for by the u.s.taxpayers.

just in time for enrolling in Queens P.S.'s ,at a cost of $20,000 /refugee/year at property taxpayer cost.

how is that for HOPE/CHANGE from the communist government ?

the dem. senate is asking for emergency $2.7 billion for the U.A.C.

citizens will eventually pay a fortune in the future for this dem. gov.flim/flam

watch c-span and puke, before they go on recess/vacation next week.

Why doesn't Obama just increase aid to Honduras and save us some money. Why can't the president of Honduras take care of his own people? Why are we involved in their business anyway. Isn't Obama circumventing Federal Law? Why do we have immigration laws if they aren't enforced?

You haven't been paying attention.

Glad to see "Honest Joe" Crowley's hacks are posting overtime garbage on this blog to get attention away from him and his henchmen in the Democratic Party who created this mess.

I think we should insist that "Honest Joe" live in an immigrant community, and have his kids go to schools that are filled with majority undocumented children.

It's only temporary until they're deported.

Thought you all should compare Crowley's world to yours: