An end to poor doors? 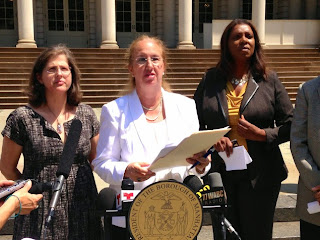 Manhattan Borough President Gale Brewer wants to put an end to “poor doors” and she wants to do it now.

“We are here to discuss a very troubling trend in the construction of new condominium buildings,” Ms. Brewer said this morning in City Hall. “It has come to my attention that developers are abusing an option left over in the inclusionary housing zoning text to create segregated buildings, often known as two-door buildings.”

Ms. Brewer, a former Upper West Side lawmaker, is frustrated about what is occurring at a development on the Upper West Side, where affordable units will be segregated into one section of a new building, 40 Riverside Boulevard, and market-rate condos in the other. Construction on the building began during the Bloomberg administration.

“In 2007 the state of New York modified the 4218 program so developers could only access the program’s tax benefits if they provided the affordable housing on site. But the city didn’t amend the local inclusionary housing program to fully effectuate that change” Ms. Brewer explained. “It was a mistake, but as a city we can rectify it. Changes can and must me made to the city’s inclusionary housing program to stop developers for segregating and segmenting buildings.”

Ms. Brewer said the “poor door system” was an affront to Manhattan’s values. She said she was working with City Council on legislation that would eliminate the loopholes in the inclusionary housing regulation and put an end to the “poor door” system.

“The two-door system, or creating a poor-door system as some media have coined it, is an affront to New Yorker’s belief in fairness and diversity” she said. “Creating a two-tier system in a development that is receiving tax benefits is offensive.”
Posted by Queens Crapper at 12:43 AM

man, when a parasite latches on, it sure doesn't like to let go, huh?

Its not enough to get giant discounts on brand new housing units, they are not DEMANDING high-end amenities they aren't asked to help contribute to the funding of.

Amazing. This city is done for.

What are you talking about? Having people use the same door won't cost the developers a dime.

Where is dickblasio on this issue? I haven't heard a peep out of him about this issue.

We all will be in the "Poor House" with our tax and spend polices.

Mayor zero vision is in Italy looking for ideas to make NYC even more unlivable.It shouldn't shock anyone that big bad bill as public advocate helped pushed all that tower shit in Brooklyn and that copper toilet arena on Atlantic Ave.

it's awful that a judge actually ruled for blatant discrimination.it's clearly not just a race thing anymore.we got class segregation happening.can't wait to see the new water fountains and the seats in the back of the bus.

This is an oddly interesting subject.

People with lesser means have access to upper echelon dwellings as a trade off for the developers.

Those people that have that opportunity, cannot use the amenities, that is fair.

If I'm a developer, and I'm forced to offer x amount of affordable housing or heavily discounted prices, i should be allowed to make a separate entrance if it's as nice as the other or doesn't look like a service entrance.

What are you talking about? Having people use the same door won't cost the developers a dime.
-----------

Its not just using a doorway. The lobbies of which that door is connected to costs more to maintain than a "poor door" lobby, since they often had added amenities like 24/7 staffing, concierge service, FreshDirect storage rooms, etc, as well as allows access to other amenities the building offers full-price tenants (gyms, theaters, terraces, etc). Not to mention things like lobby TVs and seating areas.

All of that is paid for by the higher rents that the poors aren't contributing to.

Its not just a matter of a door frame.

Once again, if it's there already for the rich folks, who are getting tax breaks for their luxury, how is sharing it costing anyone a dime?

Manhattan has values? Take on some homeless and landfills then. Oh, real estate values nevermind then.

Putting these units here in the first place is ridiculous. Get rid of the tax breaks instead, maybe add a luxury tax on expensive units too. Use the money to give cash subsidies to the poor, would be more efficient, and instead of benefiting those that win these lotteries it would help all of them. And if you really want to help deal with the city's housing crisis stop overdoing it with the historic districts, landmarks, and low density zoning in areas where it isn't appropriate.

The housing crisis. What the hell does that mean?

If things get too expensive, then so be it. People will go somewhere else. I live in Queens and pay rent, why would someone that needs to pay less rent than me get access to something cheaper. If they are low wage workers, they can do that in many other states.

If the crap hit the fan and I couldn't swing it, I would make the choice to move somewhere more affordable or a place I can find employment.

If that cheap place doesn't exist anymore, why create it.

Who cares if Manhattan becomes out of the reach of most, the mass will move elsewhere.

We screwed up with building projects in what has become the most valuable water front property on the east coast. What did that do for this great city, who benefitted?

The few lucky families that get to live in a place beyond their means, will benefit who but those people. They are essentially being subsidized by mr and mrs taxpayer because of the tax breaks to the developer.

If I hear another story about how our politicians pushed for affordable housing, I may throw up.

Hypothetically, a developer wants to build 1000 market priced apts. They need approval so the city/state require about 250 affordable units. Guess what, the developers get to build 1400 apts now and give 300 affordable units. What is the goal, to create something new for downtrodden New Yorkers, or just appeasing a politically connected development group.

Are the "poor" who are getting these apartments for cheap as disturbed about this door issue as our dedicated politicians? I don't think so.

A lot of the "affordable" apartments are not cheap - they're still several thousand a month.

A lot of market rate condos/co-ops are just bought by foreigners to store their dirty money - they don't live here.

The developers get tax breaks for offering these apartments.

There aren't many jobs anymore that enable one to live in NYC. Most jobs are minimum wage and pay less than 25K/year. Market rate apartments probably start at 2K/month.

There's nowhere else to move to that's cheaper - just illegal basements in Flushing if you're Asian and Corona/College Point if you're Latino - and they won't rent to Caucasians.

These developers are not giving anything away to the poor - they're still making obscene profits.

The housing in a city should match the income - people that work here should be able to live here - real estate should not just be a bank for illegal money.

Share-and-share alike all the amenities of a New York City luxury apartment with everyone on some form public assistance.

The developers won't bear this burden. It will be the scammed renters of these "luxury apartments with luxury amenities".

Today, it's only a door.

We tend to look at the developers as though they are in the wrong. They are given an opportunity tax wise and they take it.

Putting up the money to develop something is the American way, why should that stop or slow down.

We rely on laws and city/state politicians to enforce current rules and regulations.

Rents should be regulated better, but limiting means nobody will bother to build anything.

The city/state needs to take a more rigid stance, but how can they because they don't really work for us anymore.

Regarding income in this city, why should the housing match the income. Where do we get REAL data. How many people don't claim income, correct income? We need real data, the agencies don't correlate and all the stats don't add up.

In any area, as rents go up with few takers, demand decreases and rents go down. Rents are not going down apparently and people are making enough money to pay them, so there must be some parts of the puzzle missing.

The need for affordable housing comes from where exactly? Where are these people now, where were they living? How does one qualify to rent an apartment in a new development at a highly discounted rate?

Which part of the city/state governs this?

Can a regular middle working class family paying 1800 a month in Flushing qualify for affordable housing without ever have been on welfare/section 8,food stamps?

Are we promoting people to sign onto a system where before they just worked hard? Just because a person works, lives and may have grown up in an area doesn't entitle them to remain if they get priced out due to demand.