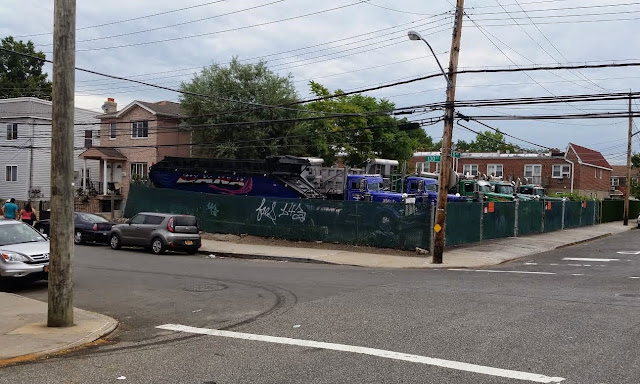 Dear Editors of the “Queens Crap”,

We would like to update you on the situation regarding the illegal parking lot that was mentioned on your website on May 22nd at 14-29 130th Street College Point. The Company in question which was originally named the TNP Trucking Corp has closed while a new trucking company was opened and is operating in the same lots. The only difference between the old company and the new company, Dana Construction, is the company name and vehicle logos. The same crap continues to plague the local area since the trucks have proceeded to parking in the illegal lot like they used to and operating late at night and disturbing neighbors. The building department court was going to have a hearing to evict the company from the premises but the hearing was postponed constantly and is still being postponed as I write this letter. The most recent hearing that was supposed to occur was July. What still puzzles me is the fact that if a company is violating city and state laws, how are they still receiving city and state contracts from the DOT? The company’s main revenue comes from the city and state contracts so if they were cut off from these contracts, they would have gone under by now.

Also, how is the New York City Comptroller not taking notice to the fact that this company was violating city and state laws and still getting paid? I would also like to mention the fact that the residential lot that the company has been occupying for the past 13 years is heavily contaminated due to the fact that they also used the lot as a maintenance yard and many of the trucks are leaking fluids. When heavy rain occurs, all the contamination from the lot is moved from the lot down to the street and spread around the area.

There have been multiple investigations by the DEP but every single investigation could find nothing while everyone in the area knows the lot is contaminated and being used illegally. I hope the city and state start enforcing the rules and regulations without giving priority to any individual companies since Dana Construction is clearly being assisted and covered by the city. Thank you for your time in helping us clean Queens crap. - Anonymous
Posted by Queens Crapper at 12:37 AM

Isn't it interesting that we get aggressive enforcement against people selling "loosies" while crap like this merits zero response?

your problem is its getting lost in a large bureaucratic government.

you have to make it personal.

your local electeds have to get their tails burned by this and your community board has to get involved.

stop playing government and start playing outraged citizen that wants their taxes to be used to help them not some developer.

If the owner of this empty parcel, owns the adjoining parcel and it's his business as well, it's going to be a tough nut to crack.

It will also be tough to prove someone is paying someone to utilize this parcel if different than the company.

It appears only noise complaints can be made at this point if all vehicles come and go off hours.

"Garbage Point"....another Queens shit hole.
Let's face it, Queens is a dumping ground unless you live in the posher lrestricted zoned nabes.