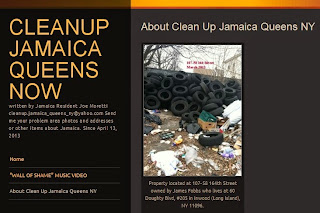 When Joe Moretti moved to Jamaica, Queens, back in November of 2010, New York City was about to experience one of the worst blizzards in its history. As more than a foot of snow covered the streets and sidewalks of his new neighborhood, Moretti was unable to see what really lay beneath. It wasn’t until the snow started melting months later when he saw that the piles of snow covered up piles of garbage.

“There was a vacant lot next to my building that always had a bunch of garbage all over the sidewalks around it and people would keep putting more. I started taking pictures and sending them to the Department of Sanitation (DSNY) and 3-1-1 because I wanted it cleaned up,” said Moretti, who has now been living in Jamaica for almost four years. “As I started walking all around Jamaica, I kept seeing more and more garbage, so more pictures and more reporting to the [DSNY].”

Moretti even took to YouTube, and posted music videos about it. While the videos garnered some media attention, Moretti wanted to get even more attention on the problem.

“I thought, ‘How can I crank this up some notches?’” Moretti said.

“That has helped to bring attention to this major problem in Jamaica. Everyone is now talking about the garbage problem, whether they are offended by what I say or not. People are starting to do something. At the end of the day we all want the same thing: a cleaner, safer and better community, I just happen to do it in a loud and different way,” Moretti said.

He posts pictures that he takes around the neighborhood and writes a few choice words for some of Jamaica’s elected officials.

“Our leaders have been completely useless on this issue and have failed to do anything. They need to make sure that all the laws on the books such as littering, uncovered garbage cans and household garbage in public garbage cans are enforced,” he said. “People here feel they can do whatever they want because there are no consequences. It truly is the Wild Wild West of Queens.”
Posted by Queens Crapper at 12:40 AM

Out of curiosity Joe, why'd you move to Jamaica? Why not some place you might find less aggravating?

A stellar light. What a guy.

And folks he does it for how much money? Zip, zilch, nada.

And how much money do the Jamaica political morons make? Around 100G's a head. And what do those morons do to earn those 100G's? They smile for the camera. Smile, assholes, smile. (Now that's hard work.)

The bottom line with living in New York City, aggravation is a given one way or another, but yes one can live in a less aggravating place, hell one can move completely out of NYC, there are much better places to live than NYC.

Me, I would rather live in my old neighborhood of Long Island City, but I can no longer afford to live there. I mean how many reading this can actually afford to live in LIC or other desirable places. So I ended up in Jamaica, yes, I could have ended up somewhere else, but this is where I ended up for the time being.

NYC is expensive (while quality of life is poor for most), so unfortunately unless you are trust fund baby, you have an extremely well-paying job or are an elected leader, you end up living where you can afford to and sometimes that means sharing the land with low-class slobs and undesirables.

But that is not the issue. The issue is that in a city such as New York, where powers to be claim it is the greatest city in the world, quality of life issues should be enforced, but they are not. From lazy,useless, corrupt leaders, to waste of time community boards, to incompetent city agencies like DOB to a fucked up 311 system and a total lack of enforcing laws with people, property owners and businesses, no one should have to endure so much bullshit.

I mean not everyone in Jamaica is low-class slobs, thugs, criminals and miscreants. In fact many are not, but all of those people have to put up with all the shit from those other folks because the city and the elected leaders are not doing their jobs and make a million excuses for that.

Sure eventually I will leave, but no matter where you go within NYC and especially Queens, you are going to deal with some type of aggravation and bullshit, because this city does a poor job when it comes to quality of life.

I don't consider LIC a desirable place to live. Convenient perhaps, but I'd find myself continually leaving the area to do anything I like to do. When your entire retail base is restaurants, that's what happens.

An article in the Queens Courier is labelled "serious attention"?

It's Johnny-Come-Lately, if you ask me.

It's time for a city sponsored fat camp. Get the hamplanets off their couches and do some community service. They get fit and lose weight and get to live in a cleaner community. It's win-win!

Keep up the great job, Joe!

the problem i have is that no one has contacted the publicity hogging politicians as to why bullshit like, for example, the transgender pacific islanders gets their drawers in a tizzy while this blot on queens remains in plain sight for all to see.

or better, why they are harvesting millions in cash from their communities in campaign donations for their party machinery while that money could do a world of good staying in the community for education, parks clean up, and stuff like this.

How about start with the NYPD. Get those lazy bums out of their cars and walking the beat. Only reason for them to be in a car is to go after criminal drivers, but they don't do that anyway.

I agree, when problems like this occur, no one from the press ever interviews the politicians. Its so simple to ask them why this exists, and more importantly, why they look the other way.

Its always how wonderful they are.

But you see, this is maintenance and not ribbon cutting for a new library branch, or a park redo. That both will need another capital upgrade within a decade because maintenance (like this trash) sucks in Queens.

Quality of life is something that has no interest to any politician.

We should ask them about this at every chance - and ask the press why they don't do their work, too!

All we get living in nyc is a bunch of third world slobs. Look at flushing as an example of the pieces of third world garbage that we get here. It is only getting worst as the third worlders start moving to other neighborhoods.