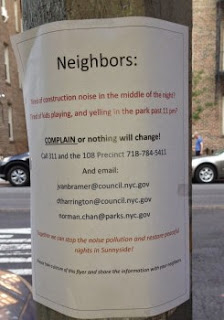 One resident who lives next to Lou Lodati Park says he can’t sleep at night due to the excessive noise caused by park goers well past 11pm.

So last Friday, Chrysantook to the streets and put up about 20 posters around neighboring streets telling residents who have similar issues to call the 108 Police Precinct, Councilman Jimmy Van Bramer’s office and 311 to complain.

The park is supposed to be closed at night but he said the Parks Department is doing nothing to stop anyone from gaining entry. He said there are no gates and yet there are three entrances into the park—one via Skillman Avenue and two smaller entrances on 43rd Street—which people are using day and night.

Now, this fellow is 100% correct to complain, but check out the idiotic comments posted on the blog. According to them, he should move, he should shut up and people should be allowed to trespass and make noise all night because "this is New York City" and it's a summer tradition. I can't help but wonder where the phenomenon of people beating up on others for justifiably complaining came from. It would make an interesting psychological study.
Posted by Queens Crapper at 12:30 AM

To a lot of the younger transplants, anyone who shows concern for quality of life issues, local traditions or asks that people behave respectfully is an "old fart." That's the usual label they like to slap on people.

There were a fair few commenters in support of this guy especially on the latter part of the comment thread.

There were plenty of longer-term residents beating up on this guy as well. If it isn't a problem for you, why get your panties in a bunch that it's a problem for someone else who wants to do something about it? It makes me think a lot of them are the ones loitering in the park causing the problem.

I think the branding of "quality of life" is just emboldening this douchebag behavior.In the minds of these narcissists and delinquents,they think they are being spontaneous and rebellious expressionist youth fighting oppressive adults.

and why reason with people when we have social media and can rely on intimidation and name calling.

don't bother jizzy jimmy,these are his constituents.He will acknowledge by smiling and nodding and vanish into some bullshit cafe/bar and mingle with his vapid confederacy of hipsters and airbnb hosts and tourists.

Why do people think that just because this is New York City, you can do whatever the fuck you want without any consideration for others, especially when it comes to noise. Then some ass will say, "move to the country".

There are rules and regulations, especially with noise, in all cities, including NYC, where because of the way we are all on top of each other, should really be respected.

Amazing whenever anyone wants a better quality of life in this city, they are demonized. It is not like this guy is being unreasonable and complaining about noise on Saturday afternoon.

Joe,
Speaking of noise and lack of consideration for others. Last Sunday night I heard music west of North Flushing that was louder than a MSG concert. It seems that it happens every weekend anyone hear it too ? I walked around to find the location but it seems to be very far from my home.

It was coming from Willets Point.

Last year I got some drone footage of some jewish kids blasting music out of their mercedes at Flushing Meadows Corona Park late saturday night/early sunday morning. It was so loud, I still recorded music halfway to Union Tpke.

You can feel the bass from Willets Point all the way to North Flushing near Bowne Park ! Disturbing to say the least.

Find out when the next community council meeting at the 108 precinct takes place. Bring your neighbors and demand that the police enforce the laws. There's usually media at these meetings so you won't get blown off

Noise from parks and cafes is a growing problem that is morphing from a simple nuisance to a real threat to the community.

This attitude started a few years back in western Queens where people were driven out of the community by outdoor cafes taking over shopping districts, crowds of young people disrupting the peace and quiet of evenings (many from out on the Island doing crap here that would never be allowed where they live as well as hipsters living four or five to an apartment), smoky hooka lounges (permitted because the local politicians are pandering to the ethnic vote)

Things were so out of control that every bar with a backyard, two tables and a large air-conditioner unit called itself a 'beer garden. Those spots also were great place to bounce around empty beer kegs at 4 AM.

You go to place like astorians.com or We Heart Astoria and you see people jumping with glee that the community was disrupted by the last World Cup ordeal.

That is all we need. Impose an alien sport where rioting and hooliganism is part of the culture.

Something needs to be done to take back communities from bars.

The problem is that bars make money, their owners are often involved in either making donations to shut up the politicians or host events for the same and make tons of money doing so.

The more successful are developers, that special favored class in our communities that the politicians love. Studio Square anyone?

Even parks, a place of recreation and quiet enjoyment are a farce of dirt and litter and noise.

Notice how we are in the middle of parks capital awards season – where the local park is gone over with the same work done 5 or 10 years ago? No one takes care of these places either maintaining them or patrolling them.

But the same people line up behind the politician every 5 years, their vote bought, and cousin Guido somewhere in the background laying yet another layer of cement soon to be baptized by beer and graffiti.

So no, like the dirt in Jamaica and the day laborers in your neighborhood, the elected officials are blind and clueless...

as they focus their attention on the things they feel are important in your lives like the plight of the transgendered Pacific Islanders.