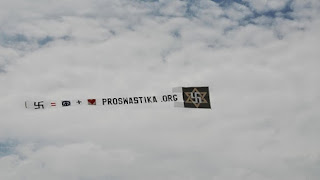 After a banner featuring a swastika soared above city and Long Island beaches over the weekend, a state assemblyman is looking for the government to prevent it from happening again.

The sky banner wasn’t meant to be anti-Semitic. It was paid for by the International Raelian Movement, a religion based in Switzerland whose followers believe life on earth was created by a species of aliens, WCBS 880′s Alex Silverman reported. They are trying to rehabilitate the swastika, which the group said had a meaning of peace and love before it was adopted by the Nazis.

Regardless, Assemblyman Phil Goldfelder, D-Queens, told Silverman he is asking the city’s Department of Consumer Affairs to look at regulating swastikas in the sky and other offensive ads, which he thinks can be done without opening a constitutional can of worms. He’s also considering introducing legislation.

The Raelians, however, say the sign should be protected under the First Amendment.

Yeah, I think our local electeds need to be reschooled in the Constitution. And in message context.
Posted by Queens Crapper at 12:44 AM

Time for Hindus and Buddhists to call for the banning of the Star of David.

Funny how the "persecuted" Jews have become so intolerant. Ever try to sit on a bus in Brooklyn? Yahweh forbid if you're a woman.

Once again, the Zionist are trying to gain control.

We cannot let them take over the First Amendment.

I guess you can only have free speech in this city if it supports deblowzio 's liberal ideas. Free speech means free speech even if its offensive to some.

Once again, around election times, yet another Assemblyman needs a photo-up to prove that he's doing something to earn his salary.

if the swastika becomes acceptable after this will we see the hipsters embrace the toothbrush mustache?

The swastika (or whatever it was called before the Nazis took it for their own purposes) is still a widely used symbol appearing on Buddhist statues and in Buddhist temples. I hope that Phil is not going to try to outlaw them, too.

How about banning offensive assemblymen?

If I remember my Native American history the swastika was a good luck symbol for many tribes especially the Navajo.

Those politicians are perfectly happy to let the center of any community fall, for that is always a potential competitor for the public's ear and attention.

For example, look at Jimmy No Brainer's 'community' budget process where Sunnyside, the projects in his district, and his beloved Tower People are given completely separate pitches.

God forbid they should all get together for the many (generally ignored) issues they have in common.

wow, all of a sudden your readers are so worldly.

True, the First Amendment clearly protects movements like this.

However, I don't think we need a law to illegalize insensitivity.

Regardless of their intentions, this group had to know they would offend a large group of people.

It's a matter of basic courtesy, not of free speech, to understand that one should not fly a Swastika for any reason over New York.

I'm not Jewish, but my family suffered during WWII, and I know for a fact that their generation and those afterward will never see the Swastika as a symbol for anything other than hate.

And so the anti-semites come out of the woodwork. If it's any consolation, this Jew is disgusted with Goldfelder's effort to trample free speech. I hope you don't judge his kinsman by his own stupidity and arrogance.

Anon Nos. 13 and 14 said it all. As far as you other guys, I dare you to go up to someone who lost relatives to the Nazis, or who actually experienced the Holocaust and say what you said.

What Goldfeder said was silly and was intended only for publicity. At the same time, no matter what the swastika meant before the 1940s, and I understand that, it only stands for one thing now, the murder of millions of people.

At the same time, the lavender triangle, which was created to designate gays during the Holocaust, was adopted by the gay pride movement.

Anon, you are completely wrong. I will gladly point you to Hindu and Buddhist shops in Queens that still sell swastikas. The fact is that the Jewish minority is trying to oppress the vast majority of Hindus and Buddhists.
Just because you said something does not make true. Remember what a small segment of the population you truly are and stop using Hitler as the reason why the world should be reshaped as you see fit instead.

Got a better idea.How about hitching up ol Goldfeder to that contraption and give him a skyride over the beaches.I'm sure he'd be down with that.

Identify one Jew who is trying to do that. And you, with your hateful attitude towards people of the Jewish faith (go ahead and admit it - it will make you feel much better) are the person in the minority.

How about banning offensive assemblymen?

Yes, Phil is wrong on this one. But he's a good man who actually does work hard for his community. And while he likes the photo op as much as any of them, he doesn't need it. He's probably going to be unopposed in this election. The Republicans even seriously considered the idea of cross-endorsing him.

His idea would squelch speech and must not go forward but at least one can sympathize with where he's coming from. He previously tried to get the city to ban racy airborne ads with bikini babes on them because the young kids at the beach were seeing them, including his own.

He's a deeply religious family man who lost nearly everything he owned in Sandy but was out helping everyone else immediately. Again, though wrong on this one, Phil is generally much less liberal, much more active and much smarter than most of the Dems in the Assembly and he's a good guy. He's one of best electeds you'll find in Queens.

C'mon, Crapper, you're still a good government watchdog even if you allow that positive comment about Goldfeder you got a little while ago. Show you're fair and post it.

Believe it or not, I do have a job, and can't moderate comments every 5 minutes. Keep your pants on and I get to it eventually.

Why don't you go and get a name first anon?

OK Crapper, apologies from the positive-on-Goldfeder poster. Should have given you more time, admit I thought you just didn't want the post. Glad I was wrong.

And if first name comment was directed at me, can't due to employment. Wish I could.