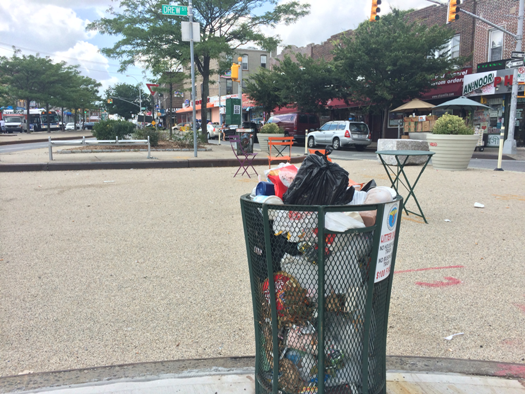 It started out as a beautification and community development project, but a pedestrian plaza on the Brooklyn-Queens border is an eyesore that is detrimental to business, locals say.

Five parking spots were permanently removed last November when the Department of Transportation (DOT) built the plaza at Drew Street and 101st at City Line.

“This plaza has totally crippled my business,” said Ahmad Ubayda, owner of the 99 Cent Ozone Park Discount Hardware store on the corner of the block. “This has been my worst year of business because they took away parking spaces for my customers but aren’t even using them.”

The site has deteriorated since its opening, locals charged.

Four tables and 12 chairs set up in a small section of the plaza while most of the space isn’t used.

Initial plans called for ample seating space, permanent bench seating and bike parking. When the plaza was first built there were plenty of chairs and tables, some even with umbrellas.

But a few weeks after its grand opening much of the furniture, which was chained up to a nearby light pole, was stolen and it hasn’t been fully replaced since, according to residents.

Moreover, the Bangladesh American Community Development and Youth Services Corporation (BACDYS), a local nonprofit organization, is responsible for the plaza’s upkeep, according to the DOT. Yet garbage overflowed from several cans and littered the floors on Monday.
Posted by Queens Crapper at 12:39 AM

These third worlders can't even keep their own countries from looking like crap so what makes you think that when they come here, they will upkeep the streets of new york?

I know it will be said several times, but what do you expect from our "diverse and vibrant" population.

And this is one of the reasons you cannot do things like this in certain neighborhoods, because they are slobs and don't appreciated this kind of thing.

I mean look, the Bangladesh American Community Development and Youth Services Corporation is not even doing what they were supposed to do as far as the upkeep.

Just remove the whole damn thing and turn it back to what is was. This community obviously does not appreciate it.

But were you expecting anything other than this kind of crap. Hey want to see how well the Bangladesh community takes care of things, visit Hillside Avenue or Major Mark Park, total messes.

But it is not just this Bangladesh community, it is many of the other vibrant folks as well.

It cost the city $hundreds of thousands to install these "pedestrian plazas" . But they will only put them in if there is a non profit group that will maintain it and run community and cultural programs in the plaza. The non profit receives money to maintain it and to run these programs. Has anyone at DOT bothered to ask this Ozone Park non profit what they have been doing with the money??? Something stinks here.

What a waste of tax dollars!

Has anyone ever visited that section of the Brooklyn Queens border ? It's a shit hole. And there are no Americans living there anymore.

There are shit plazas in Corona and Jackson Heights as well.

I have to say, though, that putting out some cheap lawn furniture and a few planters does not make for much of a pedestrian plaza.

And there are never enough garbage pails. I went to something similar in Brooklyn - there were actually employees (or 1099s) sprucing up the place!

Not every immigrant is a slob - but every broke-down, shitty, sadly neglected home in Flooshing is owned by either an Asian or an Indian. They don't get the concept curb appeal. We need home maintenance laws in NYC! If you won't do it - let the city do it and add the charge to the property's tax bill. And no more cutting down private trees!!!

Not every immigrant is a slob - but every broke-down, shitty, sadly neglected home in Flooshing is owned by either an Asian or an Indian. They don't get the concept curb appeal. We need home maintenance laws in NYC!

As we know, this does not bother a single politician. They divide each community and tailor their message to control it. Banglas don't talk about lawns, so the pols don't. Old Itailians want bocce courts, so they put that in.

There is money to fix things, but it gets unwisely spent. Without anti-litter campaigns the immigrants don't see any reason to fit in to the larger picture remaining to a large extent isolated in their communities, and more easily managed by the pols.

The community looks like a shit hole? Great, quality of life pain in the asses move, and community is prostate for illegal conversions and development.

So the final interest group, campaign donors/developers are happy too.

This is why Queens is slipping further and further behind the rest of NYC.

There should be a police camera watching over the plaza!

I don't think the problem so much is the people that use it, but more that the city makes contracts and then no one follows up to make sure that the terms of the contract are being followed. There's a lot of fanfare when things like this open, but little to no maintenance. Just like every new park in the borough.

No one from the city drove by and noticed that the trash is overflowing and tables missing and thought to pick up the phone and find out why? Maybe now that this hit the papers, it will be dealt with, but it's a shame that's what it takes to get action.

maybe thats why they stopped doing these things, like the one at Cooper Ave and Myrtle that should have been completed already.

When you give a non profit control over a pedestrian plaza, keep an eye on the money. The ones in Manhattan are run very well because they are attached to major BIDs and business associations. The smell dinky ones in Queens are run by thieves. It's time for Queens to show transparency and accountability . Otherwise shut these plazas down!

DOT can't even fill a pot hole and Parks can't even plant a tree. You want them to take care of these pedestrian parks?

This is why the position of district managers was created, so you would have a local person, reporting to the community board, holding city officials accountable. Regional offices of city departments, including police, were to be made coterminous with the community districts.

In Bay Ridge you had some great ones like Ed Hillenbrand.

Looks like the district manager has just become another seldom-show give-away.